Cardinal O’Malley: Abortion bills will have ‘radical consequences for society’ 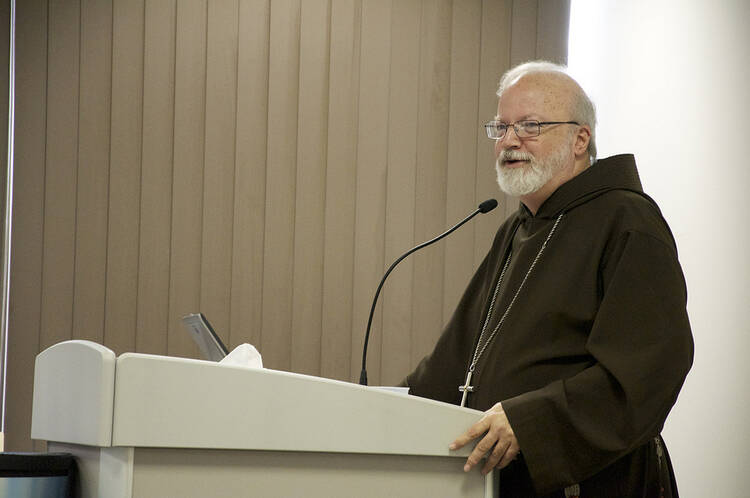 WASHINGTON (CNS) -- As polarization on the issue of abortion continues to increase throughout the country, Massachusetts legislators in early April trotted out bills to expand abortion access throughout the state, in a similar manner to the Reproductive Health Act passed in New York.

In a statement released April 6, Boston Cardinal Sean P. O'Malley condemned the bills, calling them "threatening to human life and dignity" and urging "(opposition) even by those who support the Roe v. Wade decision."

The Massachusetts Senate version, S.B. 1209 -- whose twin in the House is H.B. 3320 -- was filed by Democratic Sen. Harriette L. Chandler and allows abortion with no restrictions up to the 24th week of a pregnancy.

Additionally, it provides for abortions past this point given "the abortion is necessary to protect the patient's life or physical or mental health, or in cases of lethal fetal anomalies, or where the fetus is incompatible with sustained life outside the uterus."

In that regard, it also stipulates that "(m)edical judgment may be exercised in the light of all factors -- physical, emotional, psychological, familial and the person's age -- relevant to the well-being of the patient" before a practitioner performs an abortion.

Legal professionals have pointed out that exceptions for "health" can be used to justify an abortion for almost any reason.

In that case, Aden noted, "health" is construed so broadly that it effectively "gives you abortion on demand."

Notably, the Massachusetts bills require consent forms only from the woman who is seeking to have a procedure performed, which ostensibly precludes the possibility of parental consent before a minor's abortion.

Cardinal O'Malley remarked that he was not addressing "the proposed legislation from a religious perspective but as an issue of human rights, in this case the right to life" and that he "(does) not seek to impose the Catholic Church's teachings on a diverse society."

He then described the bills as ignoring vital moral dimensions of the abortion issue, and in that way blinding women and doctors to the true consequences of their actions.

"While the procedure has significant clinical dimensions, there is also a human reality that deserves more adequate recognition at any stage of development," Cardinal O'Malley said. "By depersonalizing the reality, the legislation dehumanizes the decision faced by women, their families and physicians."

Cardinal O'Malley finished by stressing the Catholic Church's dedication to giving women life-preserving options if they are caught in tough pregnancies: "The Archdiocese of Boston today sponsors Pregnancy Help to provide spiritual and material assistance to women facing difficult choices about abortion . ... We do not seek to judge or blame individuals, particularly women and families faced with excruciatingly difficult pregnancies."

The Massachusetts House and Senate are both currently under Democratic control. The Senate version of the bill is being reviewed in the Joint Committee on Public Health.

I wish these bishops and cardinals would take a seat and start talking to themselves the way they talk to women and drs. Then they would hear how arrogant and narrow minded and patronizing they sound.

Cardinal Sean, I doubt you read these comments but I hope you do.

You full know that laws making abortion a crime in any country do not decrease abortion. Those facts have been out for over a decade. Yet instead of stepping away from the agenda of making abortion illegal and focusing your efforts on supporting government funded daycare for all children and other far more constructive agenda priorities, you concentrate in attacking laws designed to protect women who face life threatening late term pregnancies. These make up one percent of all abortions performed. You do this in order to try and control, by your standards, what should be allowable for these women at perhaps their most stressed time of life, believing your opinion is more sound than the woman whose life is on the line and her doctor"s too.

Bottom line -stop trying to control women and instead offer women free and easily accessible artificial birth control as acts of charity, especially to the extremely poor women of the world, instead of condemning it since we know this reduces abortions every where across the globe.

If you want women to have any respect for you, you need to prove you have respect for women as equal human beings by pushing your close friend Pope Francis to immediately ordain women priests, some women bishops and make some women cardinals. Also respect means you standing up for women to have equal say and votes as all men at bishop's synods and any other counsels of our church.

Why is it you and other bishops refuse to follow the Gospels and treat and ordain women the same way you were treated and ordained?