No word on meeting between Xi Jinping and Pope Francis, but Vatican says ‘door is always open’ 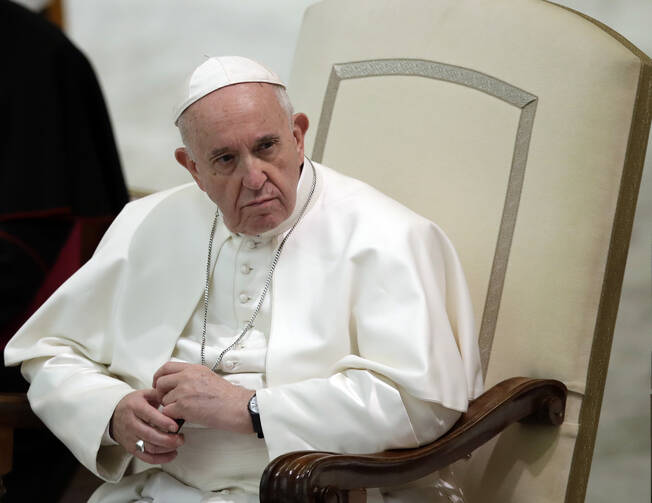 Pope Francis attends an audience with personnel and families of the Italian Court of Auditors (Corte dei Conti) in the Paul VI Hall at the Vatican Monday, March 18, 2019. (AP Photo/Alessandra Tarantino)

VATICAN CITY (AP) — The Vatican is greeting the visit to Italy of Chinese President Xi Jinping later this week with a new round of overtures and says the "door is always open" to dialogue.

Italian media have been speculating for days about the possibility of a meeting between Xi and Pope Francis during Xi's March 21-24 visit. But there has been no word from either side. China and the Holy See haven't had diplomatic relations for more than a half-century.

When asked Tuesday about Xi's visit to Italy, Cardinal Pietro Parolin, the Vatican's secretary of state, said: "Our door is always open." But he noted that both sides would have to express a willingness to meet.

At a briefing Wednesday, Chinese Vice Foreign Minister Wang Chao said the sides were working on improving relations based on "constructive dialogue" and "building mutual trust."

Wang gave no word about any meetings between Xi and the pope or any new agreements to be signed.

The Vatican has been working across a variety of fronts to build on relations stemming from the historic provisional agreement reached in September between Beijing and the Holy See over bishop nominations.

China's estimated 12 million Catholics are split between those belonging to the government-backed Chinese Catholic Patriotic Association, which is outside the pope's authority, and an underground church loyal to the pope. Underground priests and parishioners are frequently detained and harassed.

The September deal was aimed at uniting the flock, regularizing the status of seven bishops who weren't recognized by Rome and thawing decades of estrangement between China and the Vatican.

But it has led to deep reservations of some of China's underground faithful, for whom the deal represents a sell-out to the Communist government and betrayal of their decades of loyalty to the pope.

In a preface to a new book on Vatican-China relations — the publication of which was timed to coincide with Xi's visit — Parolin stressed that it's time to "remember the past and write together a new page for the future of the church in China."

"The Catholic Church in China is not a 'foreigner' but an integral and active part of Chinese history and can contribute to the edification of a society that is more harmonious and respectful of all," he wrote.

"Today, the hope of Pope Francis is that, after so many difficulties, misunderstandings, and sufferings, the Catholic Community, too, can intone in the Middle Kingdom, through sincere dialogue, a hymn of faith and thanksgiving, enriched by authentically Chinese notes," he wrote.

The book was just the latest initiative by the Vatican-affiliated Jesuit magazine, La Civilta Cattolica, to lay the intellectual and cultural foundations for improved Vatican-China ties.

As part of that effort, the magazine recently teamed up with the Jesuit-run Georgetown University in Washington to launch an ongoing series of talks, the "China Forum for Civilizational Dialogue."

The issue of bishop nominations had been the main stumbling block to restoring diplomatic relations that were severed nearly seven decades ago when the Chinese communists came to power.