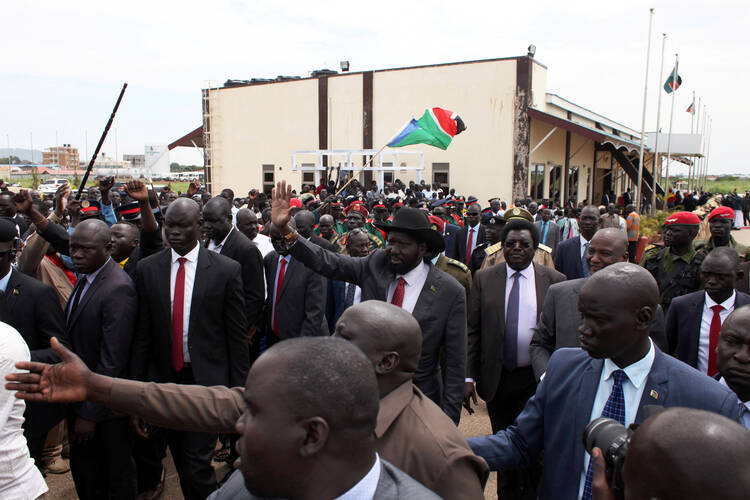 South Sudan President Salva Kiir is welcomed by supporters on his return from peace talks in Kampala July 9 at the Juba Airport. As South Sudanese peace negotiations tackled the last outstanding issues, church leaders called for genuine dialogue, healing and trust building, so that politicians have the will to implement a peace pact. (CNS photo/Andreea Campeanu, Reuters)

When Pope Francis received South Sudan’s President Salva Kiir Mayardit in the Vatican today, March 16, they talked about the implementation of the peace agreement reached last September to end the devastating civil conflict in the country and the possibility of a papal visit to the country.

While it was the president’s first official visit to the Vatican, it was the second meeting between Francis and Mr. Kiir. They first met in private for 15 minutes at the State House in Kampala in November 2015 during the pope’s visit to Kenya. After meeting the pope today, the president met the Cardinal Secretary of State, Pietro Parolin, and the Secretary for Relations with States, Archbishop Paul Gallagher, who is scheduled to visit South Sudan next week.

The Vatican issued a statement afterwards that said that in their “cordial discussions,” Pope Francis, his senior advisors and the Sudanese president highlighted “the good bilateral relations” between the Holy See and South Sudan and “the contribution of the Catholic Church in the fields of education and healthcare, and in the process of reconciliation and the reconstruction of the nation.”

South Sudan is one of the world's newest countries but also one of its most underdeveloped states.

In particular, it said, they focused their attention on “matters regarding the implementation of the agreement recently reached by various political actors, with a view to a definitive solution to the conflicts, the return of refugees and displaced persons, and the integral development of the country.”

This was a reference to the various elements of the important peace agreement that the government and Sudan People’s Liberation Movement in Opposition (SPLM – IO), the main rebel group, reached in Addis Ababa on Sept. 12, 2018. On the eve of the meeting in the Vatican, the SPLM-IO called on President Kiir to provide funds to implement that agreement, and sources close to the president said he hoped the pope would publicly encourage more international donors to do so. The Vatican statement made no explicit reference to this.

On the eve of the visit, the president’s spokesman, Mr. Ateny, told Radio Tamazuj that the visit “was aimed at deepening relations between South Sudan and the Vatican,” briefing the pope on the implementation of the peace process, and revealed that the president would invite the pope to visit the country.

The Vatican statement said Pope Francis “expressed the wish to ascertain the conditions for a possible visit to South Sudan, as a sign of closeness to the population and of encouragement for the peace process.” The two sides made tentative plans for the pope to visit in 2017, together with the Archbishop of Canterbury, Justin Welby, but these were canceled.

As the conflict continued, Pope Francis called for a “special day of prayer and fasting for peace in the world” on Feb. 23, 2018, particularly for peace in the conflict-stricken nations of the Democratic Republic of the Congo and South Sudan. The Holy See looked for ways to bring an end to the conflict, and Pope Francis followed closely the happenings in this oil-rich, ethnically diverse country of an estimated 10 to 12 million people that gained independence from Sudan in 2011 after a 20-year civil war.

South Sudan is one of the world’s newest countries but also one of its most underdeveloped states. Around 60 percent of the population is Christian, mainly Catholic (37 percent of the population) and Anglican, while over 30 percent are followers of African traditional religions. More than 6 percent are Muslim. A civil war with strong ethnic dimensions broke out in 2013 between the government of President Kiir, a Catholic and member of Dinka, the majority ethnic group in the country, and opposition forces of former (twice deposed) vice-president Riek Machar, a member of the Nuer, the second-largest ethnic group.

Despite a peace agreement signed in 2015, the conflict continued and caused the deaths of an estimated 300,000 people. Some 3.5 million more have been displaced, around 2 million internally; 1.5 million more (80 percent of them women and children) have fled to neighboring countries, including Kenya, Sudan and Uganda, and now make up the world’s third-largest refugee population after Syria and Afghanistan. The conflict has also caused famine in some areas.

Pope Francis had Caritas Internationalis provide aid to the war-stricken people of South Sudan and repeatedly called on the international community “to make greater and renewed efforts” to find a solution to the conflict that has left half of the country’s 7.3 million people hungry every day. In his address to the diplomatic corps accredited to the Holy See on Jan. 7, 2019, Francis welcomed the peace agreement reached in Addis Ababa. Sources say he might now visit South Sudan in September when he travels to Mozambique and Madagascar.

The Vatican said the talks focused on us of an’s peace method, the return of refugees and future development. The private contention sparked preventing among forces loyal to the president and rebels allied with Machar. Essay Writing Service USA

Things like this are great to see - thank you for sharing such an uplifting article. metal roofing