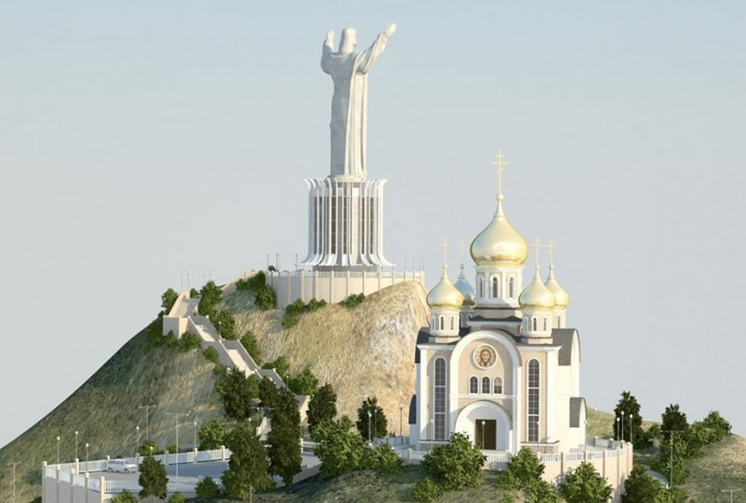 An artistic rendering of the statue of Christ planned for Vladivostok in eastern Russia. Image courtesy of Vyatsky Center

MOSCOW (RNS) — Authorities in Vladivostok, the largest city in far eastern Russia, are planning to erect a gigantic statue of Jesus Christ on a site once designated for a monument of Vladimir Lenin.

The statue, which has not yet been approved by the Russian Orthodox Church, is to be 125 feet high – the same height as the Christ the Redeemer monument in Rio de Janeiro, according to blueprints made public by Vyatsky Posad, a Russian Orthodox Christian center. The statue will stand on top of a hill looking east over the Pacific Ocean.

Soviet authorities issued orders for the construction of a 98-foot-high bronze statue of Lenin at the site in 1972. Another statue, of Soviet dictator Joseph Stalin, was planned to be built on a neighboring hill. But construction hitches meant the plans were repeatedly postponed, before eventually being scrapped altogether in 1990.

Supporters of the Jesus statue are enthusiastic, despite the lack of details about the project. Descriptions of the statue as a “symbol of the unity of the Russian people” that would “bless” ships leaving and arriving in the port city were later deleted from the Vyatsky Posad’s website, for reasons that remain unclear. Attempts by Religion News Service to contact the Vyatsky Center for comment were unsuccessful.

Other Russian media outlets, however, have published blueprints for the project, and plans for the statue were openly discussed at a meeting at the proposed site in late February attended by Oleg Kozhemyako, the regional governor; Ali Uzdenov, a vice president of the Russian business conglomerate Sistema; and Gennady Tsurkov, the head of the Vyatsky Posad center, which is connected to Iliy, an influential monk who is spiritual adviser to Patriarch Kirill, the head of the Russian Orthodox Church.

Tsurkov, in an interview with Russia’s Govorit Moskva radio station, said the statue project had been inspired by Iliy.

“He really wants to put up a statue of Jesus Christ as a protector of our Russia from the east,” Tsurkov said. “He says, ‘we need to make it higher (than the statue in Rio).’” Tsurkov clarified that while the statue itself would be the same height as the Christ the Redeemer monument, it would also stand atop a 98-foot-high pedestal. “Altogether, it will be 68 meters (223 feet),” he said.

Tsurkov said that private investors would fund the construction of the statue but that total costs had yet to be finalized.

Kozhemyako said a small chapel that could hold up to 30 people would also be built close to the statue. “Delegations will just arrive, go in, and light a candle,” the regional governor said, according to online footage of the on-site discussion.

Online opinion has been almost entirely negative. “Is there nothing else for us to spend our money on?” wrote Svetlana, on a forum for residents of Vladivostok. “We’d be better off spending the money on hospitals, schools, roads … ”

Others on the same forum suggested the project could be part of “a money-laundering scheme.”

Roman Lunkin, a religion analyst at the Russian Academy of Sciences in Moscow, told RNS that it was not certain that the Russian Orthodox Church would approve the project, because the proposed design was more in keeping with Roman Catholic statues and monuments. “There is a tradition in Orthodoxy of putting up crosses, but not statues,” he said.

With the Russian Orthodox Church closely aligned with the Kremlin, Lunkin explained, the project contained a “political-patriotic” element that apparently underlines what President Vladimir Putin has described as the religious values that bind modern Russia.

“This huge statue of Christ is proposed to act as a kind of border post in Russia’s far east to guard our motherland,” Lunkin said. He also criticized comments attributed to Ilya, the patriarch’s spiritual adviser, about making the statue larger than its counterpart in Brazil as an ill-considered attempt to “demonstrate Russian greatness” to the entire world.

The construction of a massive statue of Christ in Vladivostok would also neatly symbolize Russia’s startling transformation from an officially atheist state in the Soviet era, which ended in 1991, to today’s Christian-majority country. Around 80 percent of Russians currently identify as Orthodox Christians, including Putin, a former KGB agent. Few, however, attend church services or observe religious fasts.

The Vladivostok statue wouldn’t be the first time that a Christian structure has been built on the site of a monument to Lenin. In 2000, Moscow’s Christ the Saviour Cathedral was consecrated at a location within sight of the Kremlin towers, replacing a previous cathedral building that was demolished on Stalin’s orders in 1931 to make way for a planned 1,000-foot-high Palace of Soviets.

The palace, which would have been the world’s tallest building at the time, was to have been topped by a colossal statue of Lenin. Construction was postponed and then later scrapped with the outbreak of World War II.

It’s not only in grandiose architecture that Lenin and Jesus compete in today’s Russia. Gennady Zyuganov, the leader of the modern-day Communist Party, frequently compares Lenin to Jesus Christ and has claimed the Soviet Union was an attempt to establish “God’s kingdom on earth.”

Sistema used to be the Russian noun for Mafia - or its fellow organisations.
A spend of such a size reflects how far this branch of Christianity -
like many others - has strayed into barbarous forms of materialism
that would go apeshit if a half-crazed vagrant, largely disowned by
his nearest and dearest, were to invade the sacred spaces of finance
capitalism and take a whip to the money-changers therein.
Couldn't happen, of course....