When Father Malone is away, guest columnist James T. Keane will play ball. 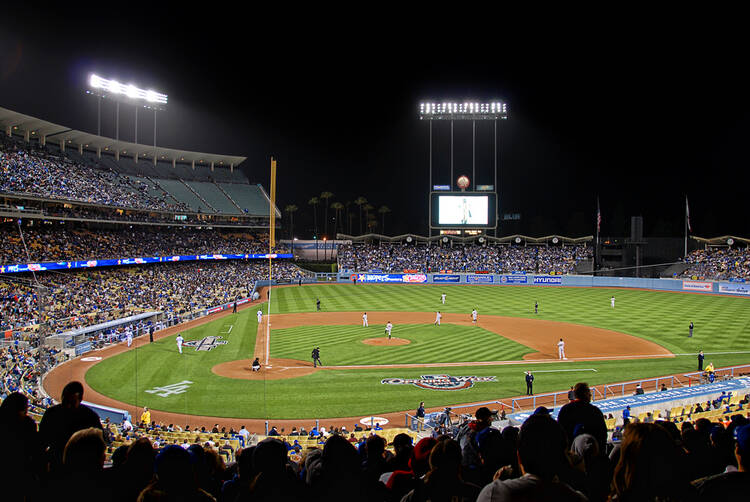 I am on pins and needles concerning another baseball matter these days: the ongoing free agency of Bartolo Colón

Matt Malone, S.J., is traveling abroad. But I also suspect he let me be the pinch-hitter for this column in America’s special sports issue out of pity. Major League Baseball’s spring training is in full swing, after all, and not a day goes by that I am not reminded that his favorite team, the Boston Red Sox, pummelled my beloved Los Angeles Dodgers in last year’s World Series. I would like to say he was a good sport about it, then and now, but you know, dear reader, it is a sin to tell a lie. So let’s just accept this gesture as recompense.

I am on pins and needles concerning another baseball matter these days: the ongoing free agency of Bartolo Colón, the husky hurler who started his major league career with the Cleveland Indians in 1997 (the year our youngest America employee was born) and went on to pitch for the Montreal Expos, the Chicago White Sox (twice), the Anaheim Angels (no, they are not from Los Angeles and I shan’t indulge their fiction), the aforementioned Boston Red Sox, the New York Yankees, the Oakland Athletics, the New York Mets, the Atlanta Braves, the Minnesota Twins and, last year, the Texas Rangers.

I am on pins and needles concerning another baseball matter these days: the ongoing free agency of Bartolo Colón.

He is a four-time All-Star and a Cy Young Award winner. Also, he weighs 285 pounds. In 2018, an opposing hitter scorched a 102-m.p.h. line drive directly at Mr. Colón. He, mirabile dictu, stopped it cold with his gut and threw the runner out, with no apparent discomfort. “I have a lot of big belly,” he told reporters after the game. “I can take it."

Oh, and he has a nickname: Big Sexy.

These are all sound arguments for why one should love Bartolo Colón, but I want a team to sign him for the 2019 season for a more selfish reason. At 45 years of age, he is the only active major league baseball player who is older than I. And I am still young as long as he’s still playing, aren’t I? One more year, Big Sexy. One more year.

Why do sports—even just in the watching—make us feel young even when we’re old? Are they our last remaining links to childhood, to carefree and unstructured leisure? To innocence?

The most famous baseball player of all time was universally known as the Babe; the hitter with the sweetest swing you ever saw was nicknamed the Kid. When the 1919 Chicago “Black Sox” threw the World Series, their greatest crime in the eyes of the country was their theft of the innocence of their young fans. Remember the boy pleading with Shoeless Joe Jackson? “Say it ain’t so, Joe! Say it ain’t so!”

Are professional sports the only acceptable realm where adults are still allowed to have heroes?

Are professional sports the only acceptable realm where adults are still allowed to have heroes? Sales of N.B.A. jerseys last year topped $2 billion, all sold to folks who want to wear a shirt in public with someone else’s name on it. Or does playing or watching sports provide a socially conditioned outlet for the baser instincts of our nature? George Orwell thought so. “Serious sport has nothing to do with fair play,” he once wrote. “It is bound up with hatred, jealousy, boastfulness, disregard of all rules and sadistic pleasure in witnessing violence. In other words, it is war minus the shooting.”

Other thinkers—Marshall McLuhan among them—would disagree, finding in sporting events some of the elements that allow a culture to understand itself. “The advantage of coverage of sports events is they are ritualistic,” McLuhan once said. “People have the feeling of participating as a group in a great meaningful ritual. And it doesn’t much matter who wins. That isn’t the point.”

McLuhan was a bit off, of course (It doesn’t matter who wins? Please.). But his central point holds: We as a culture need rituals, rites of passage, liturgies, litanies. They provide some of the connective tissue between eras, between parents and kids, between neighbors, even between nations.

And it is worth noting that the age at which we start to take sports seriously—as something really worth doing or watching, as opposed to just “fun” or “minimizing screen time”—is exactly at that point when our children become adults. We don’t want them to go off to war, necessarily, but we want to see our sons and daughters show their valor as warriors. And yes, we all want to feel young again.