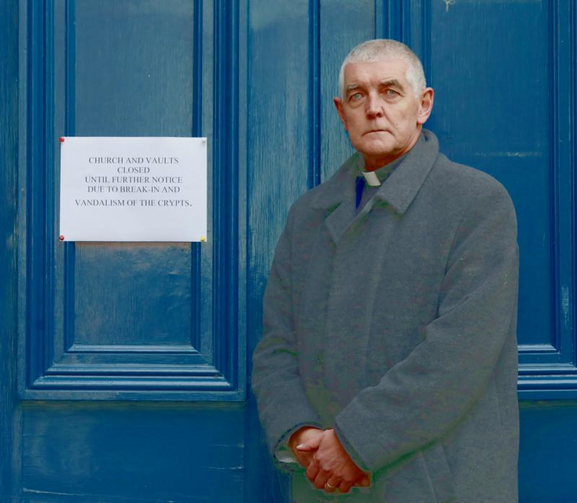 The Rev. David Pierpoint, archdeacon of Dublin, stands outside the closed St. Michan's Anglican Church in Dublin Feb. 25, 2019. Thieves broke into the church, vandalizing the crypt and taking the head of an 800-year-old mummy known as "the Crusader." (CNS photo/Leah Farrell/RollingNews.ie via Irish Catholic)

DUBLIN (CNS) -- Anglican Archbishop Michael Jackson of Dublin said he was shocked after thieves broke into a church in the Irish capital, vandalizing the crypt and taking the head of an 800-year-old mummy known as "the Crusader."

The crypt was damaged and several of the mummies, including the 400-year-old remains of a nun, were desecrated in the incident. The Crusader's body was turned over and his head was removed.

The crypt was damaged and several of the mummies, including the 400-year-old remains of a nun, were desecrated in the incident.

A spokesman said the discovery was made Feb. 25 as a guide was preparing to open the church for visitors.

"I am shocked that someone would target this ancient burial place and desecrate the remains of those lying within it," Archbishop Jackson said. "Not only have these individuals desecrated the sacred crypt, but they have destroyed these historic mummies, which have been preserved in St. Michan's for hundreds of years. I would appeal to those responsible to examine their consciences and return the head of The Crusader to its rightful place."

The Rev. David Pierpoint, archdeacon of Dublin, said he is upset and disappointed that the church has been targeted by vandals.

"The actions of these people are devastating and sacrilegious," the archdeacon said. "We are upset at the amount of damage that has been caused. But also the crypt will have to close so tourists will not be able to visit.

"It is very frustrating," he said, adding that anyone with information should contact the police.

A spokesman for the national police force said officers had carried out a forensic examination and that the investigation was ongoing.