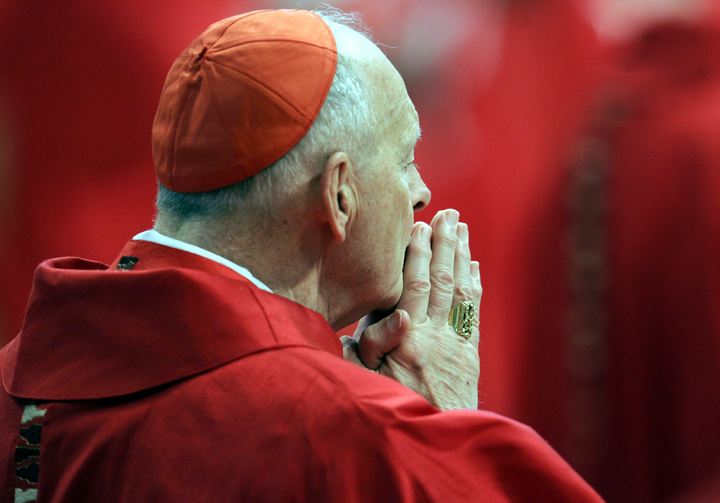 VATICAN CITY (AP) — Two U.S. cardinals attending the Vatican's sex abuse prevention summit said Friday that the downfall of their former colleague, Theodore McCarrick, was sad for the Catholic church but they hoped a new spirit of accountability would prevent future cover-ups of bishop misconduct.

Cardinals Sean O'Malley of Boston and Blase Cupich of Chicago addressed the McCarrick scandal at a press conference on the second day of Pope Francis' summit, which was dedicated Friday to holding the Catholic hierarchy accountable for preventing sexual abuse.

Francis laicized McCarrick, 88, last week after a Vatican investigation found him guilty of sexually abusing minors and adults, including during confession. His downfall has sparked a crisis in credibility in the Catholic hierarchy, since it was apparently an open secret in some U.S. and Vatican circles that he slept with seminarians.

O'Malley said he expected the Vatican and the four U.S. dioceses investigating McCarrick would soon release the results of their investigations.

"The situation of Theodore McCarrick is a very, very sad moment in history. It's a shameful moment," Cupich told reporters. "And yet, at the same time, it causes each one of us to make sure we live our lives authentically before the people of God that we serve."

O'Malley said he expected the Vatican and the four U.S. dioceses investigating McCarrick would soon release the results of their investigations. The Holy See refused a request from the U.S. bishops conference to conduct a full-scale Vatican investigation into who knew what and when about McCarrick's rise through the church's ranks, agreeing instead to a limited review of the Holy See's own archives.

The Vatican has said it would release the results, though no timeframe has been given. Separately, the four U.S. dioceses where McCarrick worked — New York City; Metuchen, New Jersey; Newark, New Jersey and Washington — are conducting their own reviews.

O'Malley said he hoped the discussions at the sex abuse summit about how bishops are responsible for the universal church would prevent another such cover-up.

"I would hope that any bishop who is aware of this kind of misbehavior would certainly make that known to the Holy See, and not feel that they in any way should try to cover up or turn a blind eye to this," he said. "Transparency is what the way forward is about.

"We have to be able to confront our sinfulness and deal with the conflict and not sweep it under the carpet," said O'Malley.

"We have to be able to confront our sinfulness and deal with the conflict and not sweep it under the carpet," said O'Malley.

The Vatican starting in 2000 was aware of rumors of McCarrick's penchant for seminarians. A New York priest wrote a letter at the urging of the Vatican's ambassador to the U.S. after his seminarians complained about his behavior. And yet McCarrick was made a cardinal in 2001 and served as a frontman for the U.S. bishops when they adopted a get-tough policy against sexually abusive priests in 2002.

Bishops, however, were exempt from that policy. The Vatican is still struggling to articulate firm protocols on how to handle accusations of misconduct against them.