The Editors: To prevent abuse, clericalism must be uprooted. 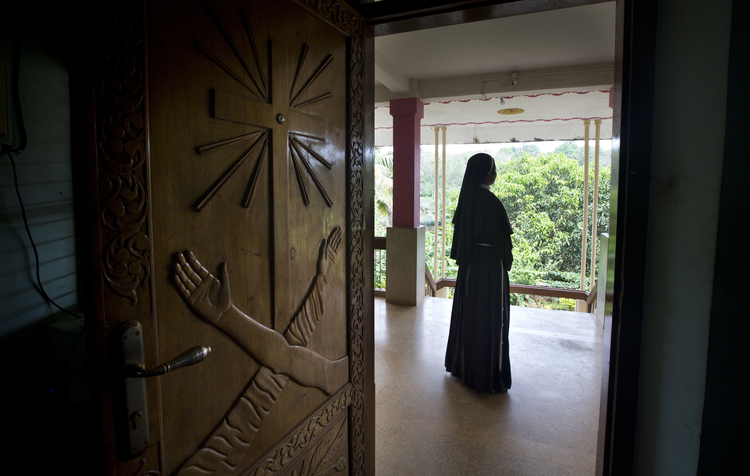 In this Saturday, Nov. 3, 2018, photo, a Catholic nun stands at the foyer of the St. Francis Mission Home in Kuravilangad in the southern Indian state of Kerala. For decades, nuns in India have quietly endured sexual pressure from Catholic priests, an AP investigation has revealed. (AP Photo/Manish Swarup)

Pope Francis once again made headlines while on board the papal plane when he acknowledged on Feb. 5 the sexual abuse of nuns by priests and clergy. “I cannot say this doesn’t happen in my house,” the pope said during a press conference. “Should something more be done? Yes.” While it was the first time Francis has publicly addressed the issue, the fact that women religious have been subject to such abuse is not news to the Vatican.

As far back as 1994, the Vatican received a comprehensive report that documented the sexual exploitation of religious sisters in 23 countries. The crisis was found to be especially acute in Africa, where offending priests and bishops considered sisters to be “safe” sexual partners amid the H.I.V./AIDS epidemic. A report presented to the Vatican in 1998 described the harassment and rape of African women religious by members of the clergy as “allegedly common” and found that some sisters were even forced by their abusers to obtain abortions. It is not clear how the Vatican responded at the time; and in the two decades since then, a culture of secrecy has kept the stories of many victims in the shadows.

Far too often, women both inside the church and out have been silenced, disbelieved and even blamed for their own abuse.

But today more and more women religious are speaking up and demanding that the church hold abusers to account. In India, a bishop was arrested and temporarily removed from ministry after a nun alleged that he had repeatedly raped her over two years. Late last year, the Vatican launched an investigation into a religious order in Chile after a number of nuns went public with allegations of sexual abuse at the hands of priests. In November, the International Union of Superiors General, which represents more than 500,000 sisters worldwide, condemned the “culture of silence” and called on survivors to report their abuse to church and state authorities.

Far too often, women both inside the church and out have been silenced, disbelieved and even blamed for their own abuse. The courageous action of the women who have come forward despite the forces arrayed against them is a great service to the church. That their suffering has been acknowledged at the highest level of the church will, we hope, lead other victims to come forward. But, as Pope Francis said, more must be done. As the #MeToo movement has revealed in the worlds of business and entertainment, sexual abuse and the silence that allows it to continue are also an abuse of power. In the church, that power imbalance is called clericalism, and if the church is to prevent the abuse of women, children and all vulnerable people, that clericalism must be acknowledged and uprooted at every level.

The ORIGINAL roots of clericalism:
https://www.etsy.com/listing/590921612/women-and-the-resurrection-cartoon?ref=shop_home_feat_2

The way to uproot clericalism is for all ordained clergy from Pope Francis to those about to be ordained to take a vow. This vow would be a promise to:
1. Work for and respect equality in all ministries.
2.Practice collegiality
3.Practice transparency in all management matters
4.Practice justice in all dealings
5.Practice subsidiarity in all management matters
6.Practice full disclosure.
7. Respect the right of Catholics to choose their leaders.
This is a crisis of the hierarchy and the clergy, not the Church. We are the Church.

It gave us monarchical pastors, sacred continence, a misogynistic view of sin and the denigration of women in the Church. Root it and Medievalism out. Start by ordaining women and men if every sexuality and marital status. Celibacy not holiness. 1% of men Aces but 50% of priests