Catholic and apostolic: The complicated reality behind oversight of bishops 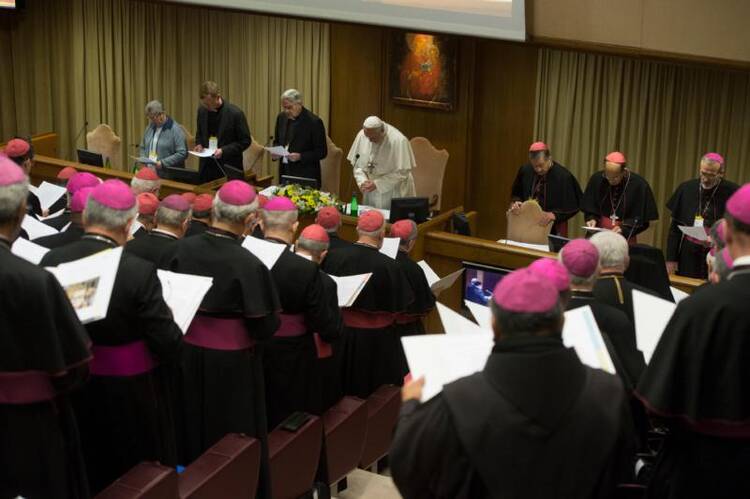 Pope Francis prays with bishops on Feb. 22, 2019, the second day of the Vatican meeting on the protection of minors. (CNS photo/Vatican Media via Reuters)

The last time the Catholic Church’s sex abuse crisis made headlines, it was a story about bad priests. John Geoghan, Paul Shanley, Ronald Paquin—priests who abused boys in the Archdiocese of Boston—were the faces of the problem in 2002.

The U.S. Conference of Catholic Bishops met in Dallas that year and proposed some rules for handling such cases. The Vatican approved them soon after. Perhaps the most important of these was the creation of review boards, staffed mostly by lay people, to determine whether allegations are credible. If they are, the case is referred to the Vatican Congregation for the Doctrine of the Faith (CDF) for adjudication. Priests with credible allegations against them are removed from ministry. The CDF also requires that “[c]ivil law concerning reporting of crimes to the appropriate authorities should always be followed.”

Lay oversight of Catholic bishops is essential—as much to vouch for honest bishops as to indict bad ones.

These procedures have been largely effective. The Center for Applied Research in the Apostolate reports that nationwide from 2015 to 2017 there were about seven allegations of abuse each year against Catholic clergy. (By contrast, 42 school teachers in Pennsylvania alone lost their licenses for sexual misconduct in 2017.) My sense is that, in general, Catholics trust their parish priests.

The problem today is that the people in the pews do not trust their bishops. There are three reasons for this. One is the release of the Pennsylvania grand jury report in August. It criticized bishops in six dioceses for mishandling hundreds of instances of abuse.

The second is the case of Theodore McCarrick, one-time cardinal and archbishop of Washington. Last Saturday the Congregation for the Doctrine of the Faith announced that a Vatican tribunal had found him guilty of abusing both minors and adults during his career as a priest and bishop. He even solicited sexual favors in the sacrament of confession. McCarrick was expelled from the clerical state. It is widely rumored and a former apostolic nuncio has alleged that a number of senior church officials knew about McCarrick’s sins and failed to act.

The third reason for the widespread distrust is that the rules adopted in 2002 do not apply to bishops, only to priests and deacons. This has caused even observant Catholics to lose faith in their leaders. Honest bishops are trying hard to disclose and punish abuse in their dioceses and to observe their own vows of celibacy. But how can the faithful tell which bishops are honest?

This is why lay oversight is essential—as much to vouch for honest bishops as to indict bad ones.

When the U.S. bishops gathered in Baltimore last November for their annual fall meeting, they planned to vote on new protocols aimed at holding bishops accountable for sexual abuse, including the creation of a special lay commission charged with reviewing allegations against bishops. But the Vatican asked them to postpone action until after this week’s summit in Rome, where the heads of the world’s bishops conferences are meeting to discuss sexual abuse.

People have accused the Vatican of failing to understand the depth of anger and frustration felt by U.S. Catholics. As it happens, though, there is a problem with transposing the mechanisms for lay review of priests to lay review of bishops.

The Dallas rules mandate that each bishop establish a predominantly lay board in his diocese to review accusations against priests. But no one would trust such a board to review the bishop himself because under canon law the board cannot be independent of the bishop. He holds all the legislative, executive, and judicial authority in his diocese. Only the pope can overrule or remove him.

U.S. law has its own version of this rule. Robert Mueller was given authority to investigate Russian election interference by the U.S. attorney general, who works for the president. On the other hand, the Consumer Financial Protection Bureau has been attacked as unconstitutional because its director is essentially independent of the president.

Our Constitution insists on presidential control of watchdog agencies because of our commitment to popular sovereignty. The president is elected by the people. Episcopal control in the Catholic Church rests on a different principle: apostolic succession.

Our Constitution insists on presidential control of watchdog agencies because of our commitment to popular sovereignty. The president is elected by the people. If they judge his performance unsatisfactory they can vote him out. The special counsel and the CFPB must be subordinate to him because, as unelected officials, they have no other democratic legitimacy.

Episcopal control in the Catholic Church rests on a different principle: apostolic succession. Bishops have been ordained in an unbroken line going back to the apostles. This chain of witnesses is what perpetuates and preserves the truth of the Gospels, which were first committed orally to the church by the followers of Jesus. Catholics also believe the Holy Spirit watches over the church to preserve it from error.

Will the summit on abuse bring meaningful changes in Rome?
Gerard O’Connell

The Reformed churches broke from the Catholic Church in the 16th century, in part, because of concerns about corruption in the hierarchy. They maintained that the Scriptures alone are the infallible rule of faith and that all believers are competent to interpret them. Their forms of governance are, not surprisingly, more democratic.

The understandable impulse for a lay check on wayward bishops could easily lead to another democratic reform in the Catholic Church, not unlike the one it saw 500 years ago. If the church wants to avoid it, it will need to find a way of giving a voice to the people in the pews. The challenge is to design a process that respects the principle of apostolic succession while providing a check on the successors of the apostles. 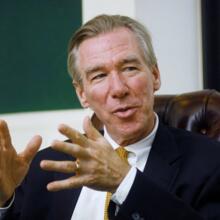 John Garvey is the president of The Catholic University of America in Washington, D.C.

The principle of Apostolic Succession is no guarantor of personal integrity. Witness Popes and Bishops during the Renaissance, well certainly not the Renaissance of the Church!

It is painfully obvious that the Church has yet to accommodate itself to the fact that ignorance and subservience are no longer prevailing attitudes among the laity. Those contexts that might, and I only say might, exist in third-world situations certainly do not prevail in most modern nations.

The Church is its people, its laity, who consent to Apostolic Succession in belief, only when there is integrity. They now leave the pews when the integrity is lacking because they no longer consider subservience to be integral to their beliefs.

Lay input into Bishop accountability for integrity would not violate any moral code and probably would accommodate New Testament admonitions to instruct the sinful.

On the very beginning bishops were elected by the community. The govern of the Church changed, not always was the present system

On the very beginning bishops were elected by the community. The govern of the Church changed, not always was the present system

“…priests who abused boys in the Archdiocese of Boston—were the faces of the problem in 2002.“

Newsflash: the CC, and the scandals, are not confined to the US. There are many other countries with Catholics, and predation scandals. Astonishing as that may seem. If this disgustingness were a purely US thing, it would not be quite so atrocious as it is. The USCC has more predators, only because it is more populous than most countries.

This notion of lay overseers to oversee the clerical overseers has no place in the CC’s understanding of the Church. It is a theological novelty, and it is far from clear that it is compatible with the teaching of V2 that the Church is hierrarchical. The freedom of the bishops from accountability to the Faithful, however awkward it may seem in the present circumstances, has the great advantage that the Church cannot legitimately be subjected to the will of a hostile state - such as Nazi Germany or the USSR.
Introducing entities that are alien to the constitution of the Church, even in order to correct a great and crying scandal, is a bad idea, because such changes do not develop organically from the Church’s doctrine regarding herself, but are hasty makeshifts to deal with an immediate problem.

In early centuries, bishops were elected by the people. During the Middle Ages, monarchs and other temporal rulers often appointed them. So it's hard to see the notion of apostolic succession, or the need for direct control over the process by the pope, as anything other than a myth. For most of church history, bishops were not accountable so directly to the pope. Appeal to apostolic succession would be different if each of the apostles had designated a successor and then those successors had designated one, on down the line to the present day. (Note that we'd have a lot fewer bishops, for one thing.) But that's just not the way it happened, and clinging to the notion of apostolic succession as an obstacle to the protection of children flirts with idolatry. We can't make notions of church governance into a god.

There just is no way one person, even a highly gifted leader, can effectively supervise thousands of people who are all over the globe. There has to be some kind of intermediate authority. And Cardinal Cupich is right that it must be a system that is transparent and known to the average Catholic, not some secret procedure known only to the bishops themselves.

What you are asking for is a broken Catholic Church--one that will become subservient at times to authoritarian rulers, and, at other times, to mob rule by popularly elected dictators. It would no longer be a prophetic voice in the world. God forbid that the "solution" to the endemic problem of child abuse--which is not going to go away, because it is a human failing--should become the rock against which the bark of Peter shatters! The loss for Christian spirituality and unity would be inestimable. It took two thousand years to establish the autonomy of the only world Church humanity has ever known. And the irony is that it should even be spoken of during the pontificate of the first pope since John XXIII who actually is "anti-clerical" in instinct, rather than monarchical.