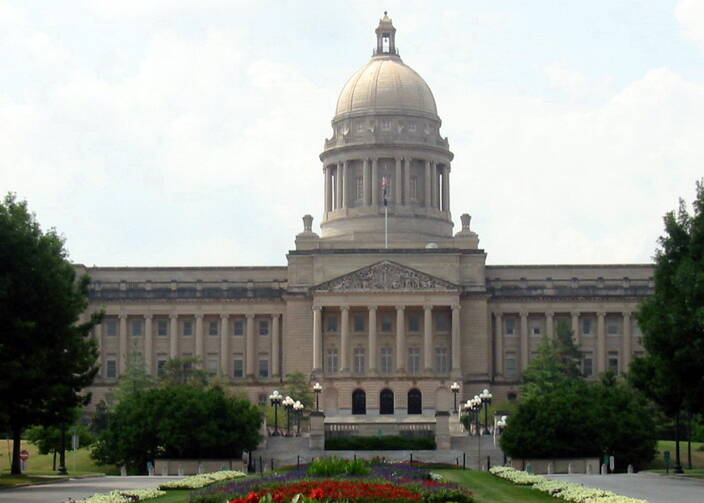 WASHINGTON (CNS) -- As legislators in multiple states push hard to expand access to abortion, claiming that doing so will give women the control they need over their lives, some Kentucky lawmakers are taking a different tack.

News website Insider Louisville reported Feb. 18 that a state Senate bill that consists of multiple protections for pregnant women in the workplace is progressing steadily through the Kentucky Senate's committees, having cleared the Judiciary Committee Feb. 14 and now bound for the Rules Committee.

Among supporters of the measure, known as S.B. 18, are the Catholic bishops of Kentucky, who agree the policy solidifies women's rights in Kentucky's economy without treading on the rights of unborn children.

The legislation is sponsored by Republican Sen. Alice Forgy Kerr alongside eight other senators, as well as being endorsed by Greater Louisville Inc., the Louisville area's chamber of commerce.

The bill's provisions expand "reasonable accommodations" for pregnant women in the workplace to include "frequent or longer breaks, time off to recover from childbirth, acquisition or modification of equipment" and "less strenuous or less hazardous work," according to an impact statement made by the Kentucky Legislative Research Commission.

It also would make "the need to express breast milk for a nursing child" among the "related medical conditions" deserving of protection by employers.

It also would make "the need to express breast milk for a nursing child" among the "related medical conditions" deserving of protection by employers.

According to Insider Louisville, Kerr underscored to the Judiciary Committee the bill will clarify what employers must afford their pregnant employees as well as ensure that women can remain viable in the workforce without being subjected to hostile work conditions or feeling they have to consider abortion.

During the hearing she said the policy is "important for our economy ... and it's important for our society as well," while adding that it "can provide critical support to women who may feel that abortion is their only option."

Jason Hall, executive director of Catholic Conference of Kentucky, told Catholic News Service in a phone interview that Kentucky's bishops have "endorsed (the bill) as a conference" and see it as beneficial from a number of angles.

"We see the bill as a pro-worker bill but also a pro-family and pro-life bill," Hall said.

While Hall acknowledged that he didn't know if the new provisions would convince a woman who was "dead set" on having an abortion against doing so, he said the bill would help pregnant women at work who are facing tough decisions, declaring that it was the intention of the bishops to "reduce abortions in any way (they) can."

"The research shows that abortion is seriously considered as an option when people have no other options" reported Hall, adding that "economic anxiety is a major factor surrounding decisions of abortion."

Hall described the bishops' advocacy for the bill as part of a much wider effort to guide Kentucky toward a pro-life environment that protects both the unborn and women.

The Catholic Conference of Kentucky runs "a number of ministries for women in difficult pregnancies" as well as diverting funds that were once spent on a pregnancy hotline on more "direct services to (pregnant) women," according to Hall.

The Kentucky bishops also have recently backed a House bill that will greatly restrict abortion in the event Roe v. Wade is overturned. Hall told CNS he considered H.B. 148 the "answer" to New York's Reproductive Health Act, which protects abortion if the landmark case is struck down.

This bill is an extremely small step in the right direction but do not be misled it is in no way an answer to the abortion demand in the U.S.

For starters it would seem Kentucky is basically abusive to women workers, and especially pregnant women workers currently. So this bill basically mandates that Kentucky business owners stop treating pregnant women in a ways that would likely end in their miscarrying their child, or in them giving birth far too early because Kentucky lacks virtually any accommodations now for pregnant women.

A report on this proposed bill highlights the fact that Kentucky is fifth in the country for preterm births, and that jobs that require physical labor, such as heavy lifting, bending and standing for lengthy periods, may create a strain on a pregnant worker and her developing child and could lead to increased risk of miscarriage or preterm birth so this bill will try to protect women from these demands in the future (since they are not protected now.)

It is not surprising that this bill is necessary in Kentucky given that this is the case in many conservative so-called Christian run states. By the way, many, if not most liberal states, like New York, Massachusetts and Connecticut already have these accommodations in their labor laws and have had them for years. Again, being Pro-choice does not equate to being Pro-Abortion but merely to Pro-women choosing over government what should be done with a woman's pregnancy and future.

Notice we are not being told how long the maternity/paternity time will be or will it be paid leave. Trust me that is no accident, and it usually means not much time at all. Also, already the Kentucky's legislature has members stating that the law should not have to be upheld by companies with 15 employees or less. So if you don't work for a large company Susie you can just keep on lifting those huge heavy boxes during your 7th - 8th month of pregnancy because your unborn baby doesn't matter.

Hello Bishops! - this bill is a joke! If you do not stop trying to make laws criminalizing abortion, more abortions will begin happening here in the U.S. just like they do in every other country of the world that restricts access to abortion. So maybe its the Pro-lifers, and our Church Hierarchy who are the real murderers after all. They know the facts but they just don't seem to care.

FYI- in case anyone reading this thread actually cares about the unborn or women, the kind of help women need is government funded free birth control, daycare and healthcare. Without these necessities being funded your whole platform is a joke. That is not a guess but evidence based information gleaned from researchers on global causes for abortion.

Your comments are excellent and I totally agree with you. I always enjoy reading your postings. Kentucky is very much an anti-choice state, but it does nothing to protect pregnant women in the workplace. Why? Because of money…economics.

Ironically, pro-birth people criticize women for having abortions due to their lack of financial support… economics. Yet, whenever one reads articles like this, it is obvious they are not improving conditions due to economics…they don’t want to pay the taxes for the improvements.

I have begun using the term pro-birth based on the below comments by Sister Joan Chittister, Order of St. Benedict, with whom I totally agree.

"I do not believe that just because you're opposed to abortion, that that makes you pro-life. In fact, I think in many cases, your morality is deeply lacking if all you want is a child born but not a child fed, not a child educated, not a child housed. And why would I think that you don't? Because you don't want any tax money to go there. That's not pro-life. That's pro-birth. We need a much broader conversation on what the morality of pro-life is."
http://gbom.org/quotes/232-sister-joan-chittister-on-abortion

Abortion should not be allowed for birth control alone. But the day of 'increase and multiply' as an order ended long ago. States giving considerations to the pregnant are doing the right thing.