Abuse survivor: Blaming homosexuality for abuse of minors is distraction 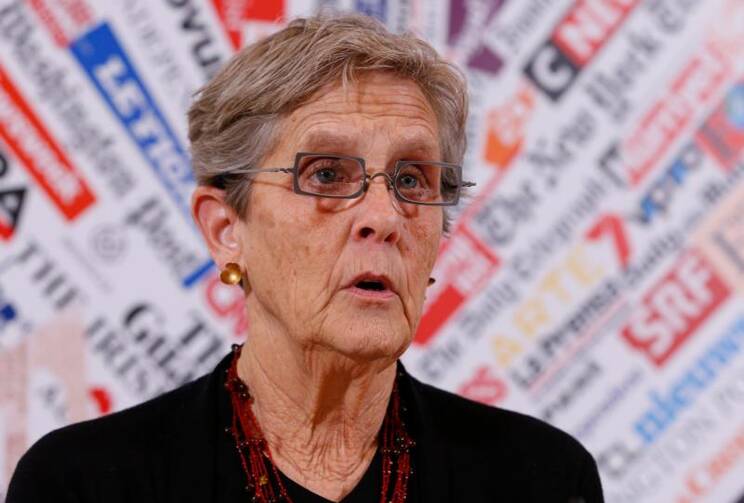 Barbara Dorris, an abuse survivor and former executive director of Survivors Network of those Abused by Priests, speaks at a news conference at the Foreign Press Club in Rome Feb. 19, 2019. The event was held to talk about the abuse of women as the Vatican prepares for its Feb. 21-24 Vatican meeting on the protection of minors in the church. (CNS photo/Paul Haring)

"To make this link between homosexuality and pedophilia is absolutely immoral, it is unconscionable and has to stop," said Peter Isely, a survivor and founding member of the survivor's group SNAP.

Speaking to reporters outside the Vatican press office Feb. 18, he said: "No matter what your sexual orientation is, if you've committed a criminal act against a child, you're a criminal. That's the designation that counts. Period."

Isely and other survivors were in Rome to speak with the media ahead of a Vatican summit Feb. 21-24 on child protection in the Catholic Church.

Phil Saviano, who founded SNAP's New England chapter and is a board member of BishopsAccountability.org, told reporters Feb. 19 that he felt "there has been a lot of scapegoating of homosexual men as being child predators."

To lay the blame for the abuse of children on homosexuality "tells me that they really don't understand" the problem and have made a claim "that is not based on any source of reality."

"I will admit that if a priest is abusing a 16-, 17- or 18-year-old boy, that part of the element that is going on there is homosexuality, but that is not the root of the problem" of abuse by clergy, he said at an event at the Foreign Press Association in Rome.

"Trying to lump it all together under homosexually," he said, is "a dodge" and will not "lead to a proper solution."

Saviano was a prepubescent boy when he was abused by Father David A. Holley of Worcester, Massachusetts, and he said, very often, a perpetrator is no longer "interested" in his victim when the child goes through puberty.

Saviano, whose story of abuse triggered the Boston Globe investigation and was featured in the film Spotlight, said he hears from victims from all over the world "and many of them are women who were abused as children."

"Trying to lump it all together under homosexually," he said, is "a dodge" and will not "lead to a proper solution."

"It is also an insult to all the women who have been sexually abused as children," he added.

U.S. Cardinal Raymond L. Burke and German Cardinal Walter Brandmuller released an open letter Feb. 19, urging the Vatican summit to take up the theme of homosexuality in the priesthood and other evidence of a more general questioning of traditional Catholic morality.

With the summit, they said, it seems that the "difficulty" in the church "is reduced to that of the abuse of minors, a horrible crime, especially when it is perpetrated by a priest, which is, however, only part of a much greater crisis. The plague of the homosexual agenda has been spread within the church, promoted by organized networks and protected by a climate of complicity and a conspiracy of silence."

No, homosexuality is not a risk factor for the sexual abuse of children
Thomas G. Plante

The report of the John Jay College of Criminal Justice on clergy abuse in the Catholic Church in the United States found there was no "causative relationship" between either celibacy or homosexuality and the sexual assault of children by church members.

The report concluded clerical sexual abuse of children was more a crime of opportunity with abusers violating whomever they had more unsupervised access to -- regardless of age and gender -- and that abusive priests almost always had more access to boys.

Barbara Dorris, a survivor and former executive director of SNAP, told reporters in Rome Feb. 19 that in the past 17 years, she has spoken to "thousands, thousands of victims" and close to half of them were women.

Too many women feel they will not be believed or "will be blamed" as having tempted a priest, Dorris said.

"Survivors only come forward when they feel they will be believed, when they feel they can get help or when reporting the crimes will make a change, when it will help others protect children," she said. "Most of the stories in the media in the past have been about the altar boys; the abuse of women and girls has not been the focus of coverage and when it has, unfortunately, words like 'affair' and 'relationship' have been used."

Too many women feel they will not be believed or "will be blamed" as having tempted a priest, Dorris said. "It's a vicious cycle," because victims speak up when they see other victims have been believed.

Framing the abuse crisis "as a homosexual issue," she said, takes the focus away from "the real issue, which is criminal sexual assault."

Focusing on homosexuality also "acts as a smokescreen; people now are discussing homosexuality, rather than the crimes themselves," she said. Pretending clerical sexual abuse is a result of homosexuality in the priesthood "automatically removes the women from the discussion and, magically, half the victims have been made to disappear."

Cardinal Burke's latest attack on gay people is truly despicable, and does not serve the good of the Church.