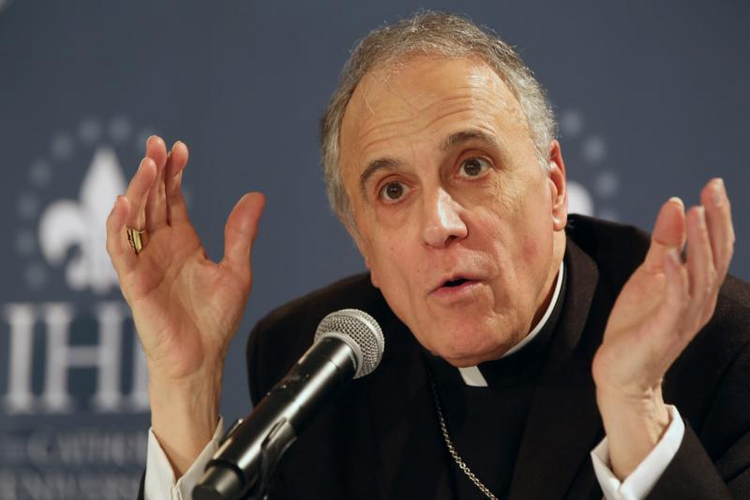 Cardinal Daniel N. DiNardo of Galveston-Houston, president of the U.S. Conference of Catholic Bishops, responds to a question during a conference on "Healing the Breach of Trust: The Role of the Laity in Responding to the Crisis" Feb. 6, 2019, at The Catholic University of America in Washington. (CNS photo/Bob Roller)

WASHINGTON (CNS) -- The Vatican’s removal from the priesthood of Theodore McCarrick “is a clear signal that abuse will not be tolerated,” said the president of the U.S. Conference of Catholic Bishops on Feb. 16.

“No bishop, no matter how influential, is above the law of the church,” said Cardinal Daniel N. DiNardo of Galveston-Houston. “For all those McCarrick abused, I pray this judgment will be one small step, among many, toward healing.”

“For us bishops, it strengthens our resolve to hold ourselves accountable to the Gospel of Jesus Christ,” the cardinal said. “I am grateful to Pope Francis for the determined way he has led the church’s response.”

Cardinal DiNardo’s statement followed the Vatican’s early morning announcement that Pope Francis has confirmed the removal from the priesthood of Theodore E. McCarrick, the 88-year-old former cardinal and archbishop of Washington.

“No bishop, no matter how influential, is above the law of the church,” said Cardinal Daniel N. DiNardo.

The Vatican said he was found guilty of “solicitation in the sacrament of confession and sins against the Sixth Commandment with minors and with adults, with the aggravating factor of the abuse of power.”

A panel of the Congregation for Doctrine of the Faith found him guilty on Jan. 11, the Vatican said. McCarrick appealed the decision, but the appeal was rejected on Feb. 13 by the congregation itself. McCarrick was informed of the decision on Feb. 15 and Pope Francis “recognized the definitive nature of this decision made in accord with law,” making a further appeal impossible.

By ordering McCarrick’s “dismissal from the clerical state,” the decision means that McCarrick loses all rights and duties associated with being a priest, cannot present himself as a priest and is forbidden to celebrate the sacraments, except to grant absolution for sins to a person in imminent danger of death.

By ordering McCarrick’s “dismissal from the clerical state,” the decision means that McCarrick loses all rights and duties associated with being a priest.

The Vatican decision comes after months of mounting accusations that he abused children and seminarians decades ago. The accusations surrounding the former cardinal have prompted many to ask U.S.C.C.B. leaders and the heads of the archdioceses and dioceses he has served how he could have risen up the ranks of the church to become a cardinal.

Ordained a priest of the New York Archdiocese, he was the founding bishop of the Diocese of Metuchen, N.J., then served as archbishop of Newark. His last assignment was as archbishop of Washington. During his tenure there, he was named a cardinal.

McCarrick’s punishment is the toughest meted out to a cardinal by the Vatican in modern times.

Last July, Pope Francis accepted his resignation from the College of Cardinals after U.S. newspapers reported detailed accounts that he exposed himself and sexually molested two boys in his early years as a priest—accusations that spanned almost five decades and were too old to legally prosecute.

In a June 20 statement, he said he had “absolutely no recollection” of the abuse maintained in his innocence but said he was stepping down out of obedience. In December he went to live at a friary in Kansas to await the outcome of the Vatican’s decision on his status.

The idea that McCarrick was finally punished for acts that were going on for decades and covered up is a sign that this behavior "will not be tolerated" is laughable as well as tragic. The only reason this is happening now is the laity is closing their wallet and leaving.

Referring to the headline: Totally wrong. What we have is a clear signal that if the church is embarrassed enough then they might act. If they'd acted before this was exposed to the public, then the headline might be correct. This is fake news or another example of mental reservation - a form of lying that the Church has perfected.

He need to b Punish and that is the best ,As Can also check For latestCelebrities News

And this is more of the same. We are to pretend that all is OK, because those who have done the harm and/or enabled it, now say it's all taken care of.

DiNardo is a one terrible hypocrite of a clerical politician who is principally interested in injuring the pontificate of the Holy Father. He himself promoted a priest who had credible accusations of sexual predation against him to the office of Director of Hispanic Outreach in his diocese here in Houston. He also threatened to rescind the healthcare of retired priests if they so much as gave Holy Eucharist to un-closeted homosexuals. He and his chancellory here claim that there are only 350 priests in his huge diocese of Galveston-Houston who have molested children since 1950. Nobody here believes him.

Craig B. Mckee
1 year 7 months ago