The personal stories of the opioid crisis paint a grim picture

The personal stories of the opioid crisis paint a grim picture 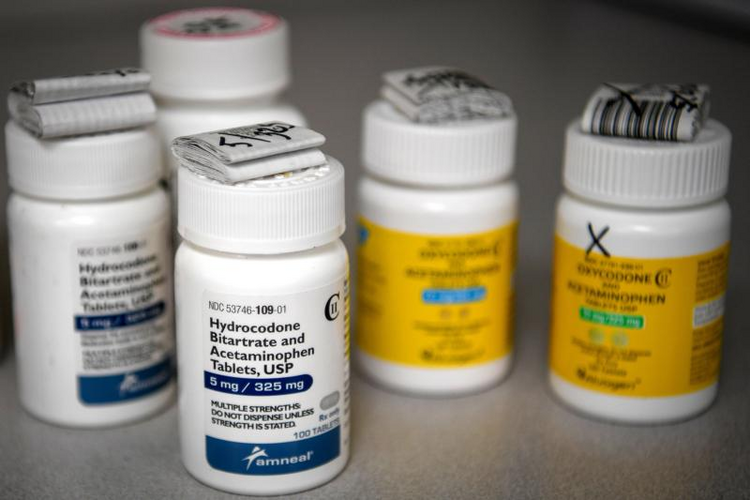 Bottles of opioid-based medication are seen at a pharmacy in Portsmouth, Ohio, June 21, 2017. Participants at the 2019 Catholic Social Ministry Gathering were told that opioids are claiming lives and affecting many others. (CNS photo/Bryan Woolston, Reuters)

WASHINGTON (CNS) -- Statistics tell the grim story of the opioid crisis that has beset the United States. But the personal stories can be even more grim.

Many of those attending a Feb. 3 workshop on the opioid crisis at the Catholic Social Ministry Gathering in Washington told personal stories of pain and loss as opioids collided with their lives.

Those stories came from parents, professional staff and prison chaplains. One chaplain said the women at the prison where she visits will tell her, "I love drugs more than I love my children." "They're weeping when they say it," the chaplain said -- an indication, she added, of the powerful hold drugs have on their life.

Many of those attending a Feb. 3 workshop on the opioid crisis at the Catholic Social Ministry Gathering in Washington told personal stories of pain and loss as opioids collided with their lives.

Kate Kosydar, parish social ministry coordinator for Catholic Charities of West Virginia -- who asked attendees if they had any stories to share -- shared her own story.

"My sister suffers with substance use disorder. She's, like, 14 years older than me, so we didn't grow up in the same house. Really," Kosydar said.

"Nobody told me anything, but by the time she was 18, she was already off and she was put in jail at some point during my childhood," she added. "My mom was talking to me on Friday, and I'd never heard this before, but when they put Jennifer in prison, it was the hugest relief for her. ... It was the first time that she felt that my sister was safe."

Kosydar continued: "My sister had a daughter, and my sister was not able to take care of said daughter. When she was 2, she came to live with us. She's five years younger than me, I was 7, she was 2, we still were raised as sisters. The kinship care that my family experienced is something that is even more and more and more frequent in West Virginia, and I'm sure that's nationwide as well. There's kids that are left behind by addiction, and if they can't take care of them, they go into the foster system."

"West Virginia is home to a lot of bad news," according to Kosydar.

"We have very bad health in general in our state, and we have the capital of overdose in Huntington, West Virginia," she continued, uttering a rueful "Yaaaaayyy." Kosydar added, "We have not one but two Netflix documentaries that take place in West Virginia. It really does put a human face on the crisis."

Despite the cascades of pain and grief, there are efforts to at least stem the tide of the opioid crisis fallout. Part of it is having a clearer picture of what people are up against.

Despite the cascades of pain and grief, there are efforts to at least stem the tide of the opioid crisis fallout. Part of it is having a clearer picture of what people are up against.

One is adverse childhood experiences, or ACEs, such as divorce that underlie some of the pain that many who are addicted to opioids have struggled with for much of their lives.

Another is toxic stress, the effect of which, Kosydar said, "would be similar to revving car engine for days or weeks at a time. Poverty is also a source of toxic stress."

Not identifying a person as the disease also is helpful, she added. "A person suffering from addiction" is better than "an addict," and the term "a negative urine screen test" is preferable to "a dirty test."

Foster care is welcome as more parents are jailed for crimes related to their abuse. Kosydar said she and her husband have taken in a 7-year-old girl. "It's hard," she said. "We already have four kids."

But finding effective treatment is difficult. There are frequently Alcoholics Anonymous groups that meet in jails, but far fewer Narcotics Anonymous groups. Kosydar said too many people in prison get no treatment while there to prepare them to live drug-free once they are released.

He wondered aloud, "Do we find ways to treat those who become addicts? Setting up a new drug treatment program is not easy, it's not cheap," and they are located far away from rural residents, many of whom need help the most.