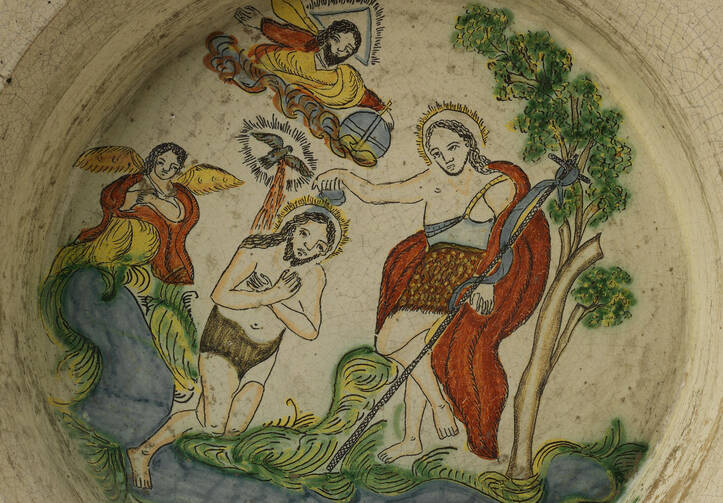 Last week, the final Jesuit Province in the United States released its list of names of Jesuits who were credibly accused of sex abuse since 1950. Over the last few months, other religious orders and dioceses have done the same thing, and voluntarily released their own lists. It’s the right thing to do—essential for the process of confession and reconciliation that needs to happen in the Catholic church. Sometimes it’s really hard to be Catholic. And, I know that’s probably not what you want to think about during your examen, but it brings up an important point in the spiritual life, and that is being in a sinful church.

Last week, when we celebrated the Baptism of Jesus, we were reminded of an important point. When Jesus decided to be baptized with the people from “all over Judea” who were being baptized, he decided to further immerse himself in our humanity. Even though he is sinless, he stands with us. I always like to think of Jesus standing in line on the banks of the Jordan River waiting his turn to be baptized by John the Baptist. And he knew exactly with whom he was standing: some sinful religious leaders and people. So for your examen maybe you could ask yourself, How do I deal with living in a sometimes sinful institution? And, more importantly, can I find Jesus standing next to me?

I never found it hard to be a Catholic. The reasons why were instilled into me early by the good nuns and priests and then reinforced by the Christian Brothers and Jesuits.

Everyone sins, that is nothing new and some of the Popes, cardinals, religious from the past have been great sinners. A apocryphal story had a Jew asked by a friend to investigate Catholicism who then went into the history of the Church. The friend thought surely he would disdain Catholicism. The person came back and converted and said if this organization is still going on after all these bad people involved with it over the centuries, then it must be due to the blessing of God.

It's very hard being Catholic. I don't mind living in a sinful institution. I mind when that institution points to the world's sins while denying it's own--when it tries to separate itself from humanity in a make-belive, self-glorified, self-proclaimed sanctification. Jesus incarnated for everyone.

Not hard if truly Catholic:
My Church
ONE, HOLY, CATHOLIC, APOSTOLIC
ONE
Not in structure, organization, culture, or practice,
But as Jesus, in Love and Forgiveness.
HOLY
Not in common external signs of piety,
But in the pursuit of Spiritual Growth.
CATHOLIC
Not as members of one universal organization,
But reaching out to serve ALL peoples of the world,
especially the marginalized.
APOSTOLIC
Not in physical lineage to the Apostles,
But living in the Holy Spirit as bestowed on them
and us.
ONE, HOLY, CATHOLIC, APOSTOLIC
Not in a limiting or exclusive sense,
But in an Expanding and Inclusive sens.

Not hard if truly Catholic:
My Church
ONE, HOLY, CATHOLIC, APOSTOLIC
ONE
Not in structure, organization, culture, or practice,
But as Jesus, in Love and Forgiveness.
HOLY
Not in common external signs of piety,
But in the pursuit of Spiritual Growth.
CATHOLIC
Not as members of one universal organization,
But reaching out to serve ALL peoples of the world,
especially the marginalized.
APOSTOLIC
Not in physical lineage to the Apostles,
But living in the Holy Spirit as bestowed on them
and us.
ONE, HOLY, CATHOLIC, APOSTOLIC
Not in a limiting or exclusive sense,
But in an Expanding and Inclusive sens.

It is not hard to be catholic. It’s hard to watch bishops and priests disregard the moral teachings of the church. Let that sink in.

The more I see our leaders push married male priests in our future without having ordained women priests, and the more they push these rich, white, conservative ninny men as deacons and their docile wives at our parishes, the more my stomach turns during mass.

However, as long as we just sit and take it and smile at the new deacon and family stereotype he brings in with him, we laity are the guilty ones. Either we refuse such men and protest at such ordinations until women are given same sacraments or we laity will be the reason outright gender segregation takes place in our church. This is a result I will not be able to tolerate and the youth will not tolerate.

No leaders lead for long without at least the complacency of their followers.

WE, LAITY, HAVE ALWAYS BEEN THE REASON SEXISM HAS BEEN ALLOWED TO SURVIVE IN OUR RELIGION AND IF WE DO NOT COMBAT IT WITH REAL AND AGGRESSIVE ACTION NOW WE WILL BE THE REASON IT REMAINS EVEN AS IT CAUSES OUR COMPLETE SELF DESTRUCTION.

The self-worshiping Christ hating anti-Catholic bigotry of yours is rather aggravating to have to listen to from time to time. But I just pray for such profound ignorance.

Sometimes it’s really hard to be catholic is the main thing on the page. We are just heaving some of the best things on these uk edubirdie site. The is never come because we just have to change different things from our work. Those things are good for us because we need it sometime.

Amazing! this post is about the our kid I read this post and comprehend that this post is vital for our tyke in light phd writers online of the fact that in this post reveals to us a test that critical for their tyke and this test demonstrate the capacity of our tyke so every one of the guardians must peruse this post.