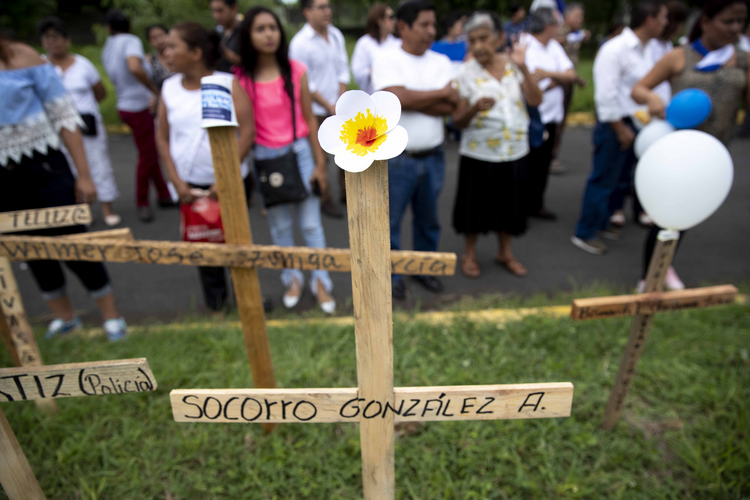 People in Managua, Nicaragua, pay tribute Oct. 28 to those who lost their lives in protest against President Daniel Ortega. (CNS photo/Jorge Torres, EPA)

"Dialogue is not a fad or simple political strategy," Bishop Baez said in his Christmas homily. "When we have a dialogue and seek paths of understanding instead of destroying and disqualifying ourselves, we reflect the mystery of the original Word, which being dialogue, brought everything into existence."

"When we do not respect human dignity, and we make the idols of power and money dominant ... we ignore the mystery of the incarnation and profane the holy name of God," Bishop Baez continued.

When we do not respect human dignity ... we ignore the mystery of the incarnation and profane the holy name of God

"Christmas imposes a demand on all of us: to make ourselves every day more human and respectful of the dignity of other persons, because only in that way will we be more similar to the living God, who has wanted to share in our condition."

Catholic leaders in Nicaragua have promoted dialogue since protests erupted in April 2018 over reforms to the country's social security system. Church-mediated talks broke down earlier in the year, however, as President Daniel Ortega rejected proposed early elections -- then escalated police and paramilitary attacks on protesters, who were demanding his ouster.

Violence in Nicaragua has claimed at least 322 lives, according to nongovernmental groups. Media report that repression from police and paramilitaries has scared protesters from taking to the streets, along with laws requiring impossible-to-obtain permits to demonstrate.

"Ortega and his inner circle have successfully repressed those who want to rebuild democracy in Nicaragua," said James Bosworth, founder of Hxagon, a political risk analysis firm. "Their response to international sanctions was to double down on repression against civil society and journalists."

Christmas was tense in the Central American country, after the Ortega regime cracked down on its critics in the press and human rights community.

On Dec. 19, the Nicaraguan government expelled the Interdisciplinary Group of Independent Experts -- operating under the auspicious of the Inter-American Commission on Human Rights -- which was investigating the deaths of protesters. The group's report said "disproportionate" force was used, along with a pattern of using lethal force -- delivering wounds to the head, neck and thorax -- against protesters, according to the Confidencial, a news outlet critical of the regime.

In the prelude to Christmas, police raided the cable and internet outlet, 100% Noticias. Earlier in December, police hauled away journalists' equipment from Confidencial.

"Criminalization and repression cannot be the foundation of governing a country. We're not going to get anywhere, and it's going to sink this society," Bishop Baez told reporters Dec. 24, according to Confidencial.

Churches have been shot at and clergy such as Bishop Baez -- prominent for his outspokenness in the face of violence -- have received threats.

On Dec. 26, a pro-government group interrupted feast day celebrations for St. Stephen by entering the parish in the city of Catrina and attempting to take a statue of the saint during services, the international news agency EFE reported.

In a Christmas message, Pope Francis called for peace in the country.

"Before the child Jesus, may the inhabitants of beloved Nicaragua see themselves once more as brothers and sisters, so that divisions and discord will not prevail, but all may work to promote reconciliation and to build together the future of the country."

Nicaragua Vice President Rosario Murillo -- Ortega's wife, who has branded protesters "terrorists" -- thanked the pope for his message, according to pro-government media.

Ortega is still around? All that hard work and this false messiah keeps popping up. The hard work being the apparition at Cuapa.
No society can go progress when people hold onto their cherished pagan myths like communism.