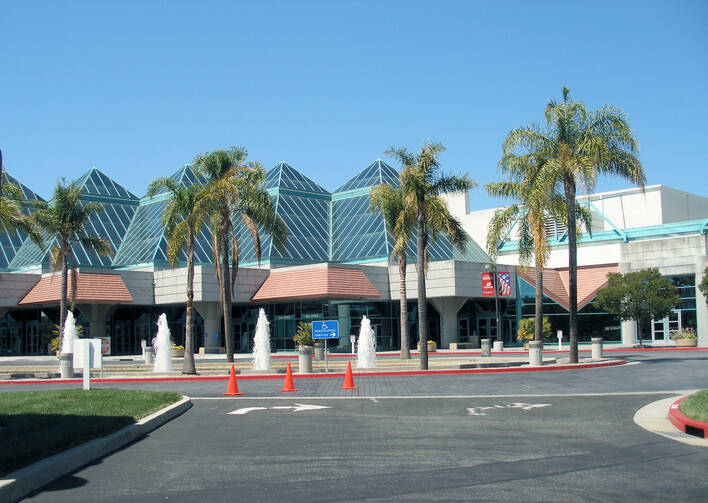 At a Nov. 29 symposium prior to the start of the Santa Clara Faith Formation Conference, researchers from St. Mary's Press discussed the findings from their study on young adults leaving the church (Wikimedia Commons)

SANTA CLARA, Calif. (CNS) -- To find Catholics who have left the church, start looking at the faces in the pews, according to a recent report.

A 2018 study on young adults leaving the Catholic Church found people stopped identifying as Catholics at a median age of 13, long before they ceased attending a parish. The report adds to the picture of a church that more people are leaving and that fewer ever want to return to.

At a Nov. 29 symposium prior to the start of the Santa Clara Faith Formation Conference, researchers from St. Mary's Press discussed the findings from their study. Titled "Going, Going, Gone: the Dynamics of Catholic Disaffiliation," the report presented an in-depth look at stories of the men and women who left Catholicism.

Robert J. McCarty, one of the study authors, told the audience that about a third of respondents left over church teaching, most often that on same-sex marriage and homosexuality.

"Young people see dealing with the gay community as an issue of social justice and human dignity, not an issue of sexuality," he said.

Study participants also said they stopped identifying as Catholics because of a disbelief in religion, or a personal or familial change in their religious denomination.

Study participants also said they stopped identifying as Catholics because of a disbelief in religion, or a personal or familial change in their religious denomination.

About half of those who left Catholicism joined another religion, while 35 percent became "nones," unaffiliated with any particular religious tradition. Less than a fifth of respondents became atheists or agnostics.

According to St. Mary's Press research, many of the respondents who stopped identifying as Catholics tended to have weak signs of attachment to the church. More than half of respondents said when they identified as Catholic they attended Mass a few times a year or less. Two-thirds of them had made their first Communion, but only a third had received confirmation. Nearly 60 percent had never been involved in any religious education or youth ministry.

Although their work focused on young adults age 15 to 25, McCarty said disaffiliation from the church is not a problem of youth ministry but a systemic crisis in handing on the faith. According to Pew Research Center, a little over a third of the adults born between 1981 and 1996 do not identify with any religion tradition. Around 13 percent of U.S. adults are former Catholics.

Part of the story of disaffiliation is the decline of social trust in all institutions. The young age of disaffiliation suggests families play an important role in choosing to leave Catholicism, McCarty said, but he also pointed to the experience of community at churches.

"Our faith community enables us to encounter Jesus: If the community doesn't do that, it's easier for us to walk away," he said.

Disaffiliation happens slowly, McCarty said, with faith gradually disappearing until a crisis forces people to make a choice. Above all, the rise in disaffiliation reflects "the secularization of culture where faith and belief are optional and not a given," he said.

The end of religious practice is not the end of spiritual desire: McCarty noted study respondents were still intensely interested in finding meaning, dignity, justice and community. But for 87 percent of respondents, nothing the church could do would bring them back to Catholicism.

Responses to disaffiliation have varied. Los Angeles Auxiliary Bishop Robert E. Barron, a participant in the recently concluded Synod of Bishops on young people, has argued for "a renewed apologetics and catechesis" that will allow for "an intelligent, respectful, and culturally sensitive explication of the faith.

"The church must walk with young people, listen to them with attention and love, and then be ready intelligently to give a reason for the hope that is within us," he said.

Whether people will continue to form religious identities absent an interest in God is in question. A recent Pew Research Center study on what gives meaning to people's lives found that only 10 percent of American adults under 30 mention "spirituality, faith, or God" when describing what affects their sense of meaning, compared to 20 percent of all U.S. adults.

The church also is encountering loss through people who were never introduced to the faith. Parents raised as Catholics increasingly choose not to enroll their children in the sacraments of initiation. While Catholic fertility rates largely reflect that of the general population, fewer infants are baptized today than in the 1940s, according to Mark Gray, a senior researcher on Catholicism.

Youth ministers at the conference were energized by the idea of change but more cautious on the details. At a roundtable session, youth ministers talked about the difficulty of changing a parish's mindset to focus on accompaniment and personal relationships instead of programming, and the difficulty of getting parents interested in their children's faith.

"We need to change how we approach things because we're still traditional in thinking things that used to work can work today," Anna Brown, a youth minister at St. Maria Goretti Parish in San Jose, told Catholic San Francisco, newspaper of the San Francisco Archdiocese.

She said the symposium had encouraged her to be more focused on building relationships through her ministry, but acknowledged the difficulty ahead for the church.

"I think it's going to take the power of the Holy Spirit to take over," she said.

Amanda George, coordinator of youth and young adult ministries for the Archdiocese of San Francisco, told Catholic San Francisco that the study showed "the way youth ministry has been done is not working." Youth are looking for different ways to be spiritual, she said, and the current ministry paradigm can stifle opportunities to create deep friendships that can guide people in their faith.

"Ministry really happens in regular moments, not in the structured environment of youth ministry," she said.

George said the church needs to be bold in addressing the challenge of youth ministry, since inaction means "we won't have anything left."

She cautioned against downplaying the church's worldview in order to open up avenues for dialogue.

"It's good to know what others are saying, and listen generously, but it's also important to remember that sin is real, the devil is out there trying to get souls, and we have to stay close to the sacraments to fight our spiritual battles," she said.

Good article. Sometimes I was interested in this too. In the materials, that I found it was told that young people, who are leaving the church to begin this way at the age of 16-18. I decided to investigate this question, since it seemed to me, that this happens earlier. I even decided to write my small college research paper, which was focused on this topic. But for completeness, I turned to two companies that offer their services for writing such works. One of them was a company with a name that speaks for itself "studicus", which in Latin means "research". I ordered a research paper for me here https://studicus.com/write-my-research-paper-online and here https://proessayservice.com/research-papers-for-sale-for-students. And I began to write the same work myself. So, as a result of writing my research, I came to the conclusion that young people, who leave the church started this way in 15 years. But after I got the work, written by professionals in specialized services, I found out that young people who leave the church begin that way in 12.5 years. This number is very close to the number, which is discussed in this article. If you are interested in these studies, then I can send them by mail to anyone. Sorry for such a big comment, but I just think it is very important.