On Gaudete Sunday, we are called to rejoice—despite the bad news. 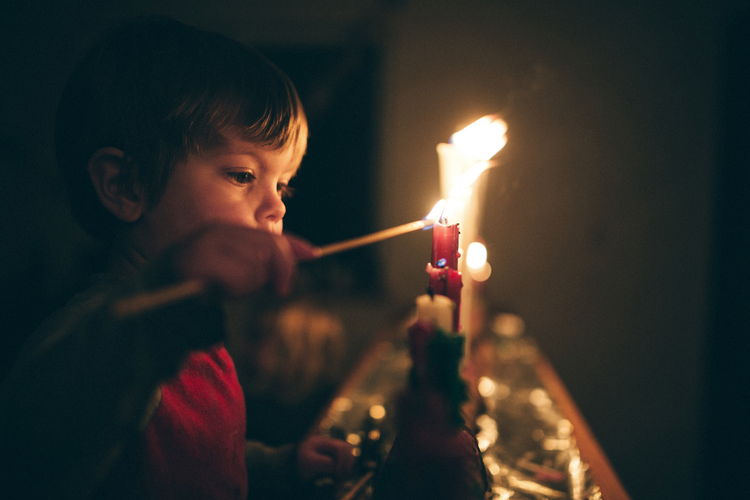 Sometimes you can join a performance already in progress with little loss. And sometimes you simply must be there when it begins. Back in the ’30s, the CBS Radio Network produced a series called “Mercury Theatre on the Air.” On Sunday night, Oct. 31, 1938, the show’s regular theme music played and an announcement was made that the evening’s entertainment would be a live radio production of H. G. Wells’s science-fiction thriller, The War of the Worlds.

Of course, as history records, a great number of people missed the show’s opening and prologue, read by its director Orson Welles. When they turned in, they first heard dance music, which was then interrupted by a news bulletin reporting that U.S. scientists had observed odd explosions on the surface of Mars. Not long after, a second interruption reported that a cylindrical object had fallen from the sky onto a farm in Grover’s Mill, N.J. You can see where this was going. Soon, there was a live news report from Grover’s Mill, where police were confronting Martians as they emerged from the cylinder that had fallen from space.

As the radio show had no commercial interruptions, latecomers were led to believe that Martians had mounted deadly attacks across the globe, including the release of poisonous gasses over New York City. Not surprisingly, real panic was reported all across the United States.

It seems hard to believe that modern people could be so gullible. Yet someone must read those incredible headlines and purchase the papers on display at check-out stands in grocery stores. And now, with the rise of Facebook, we have unmistakable evidence of something we have always asserted: People believe what they want to believe.

We seem to be at the other end of the same phenomenon—what is it that people want to believe—on the Third Sunday of Advent, Gaudete Sunday. The church once again bids us to be joyful, insisting that we have every reason to rejoice.

Could any prescription be more at odds with the spirit of the times? Indeed, The New York Times has for some time run a regular feature that highlights the good news of the week. The headline is small, and it appears like a piece of flotsam in a wave of news that, almost by definition, seems ever to be bad.

The church once again bids us to be joyful, insisting that we have every reason to rejoice.

Why is the church swimming upstream, calling us to rejoice? It is O.K. to tell the kids that we are halfway through Advent, so it is time to be happy and to light the rose candle. But given that Advent in the West has virtually ceased to be the penitential season that it once was, the lesson limps a bit.

Of course, the deeper significance of the day is that we are halfway to the coming of Christmas in the Advent calendar, and that parallels our place in the history of salvation itself. We are somewhere in the middle, between the first coming of Christ in poverty, humility and hiddenness and his second coming in glory and power. So the church tells us to rest assured and to rejoice. We know how this story will end. Because our future belongs to Christ, we can be joyful now, even in the midst of sorrows and troubles.

The Lord is near.
Have no anxiety at all, but in everything,
by prayer and petition, with thanksgiving,
make your requests known to God.
Then the peace of God that surpasses all understanding
will guard your hearts and minds in Christ Jesus (Phil 4:5-7).

This is, of course, quite true. Yet the annual proclamation, like the modern holiday season itself, seems to blithely ignore those who are suffering greatly at this time because of a death, a diagnosis, a divorce, a natural disaster or any one of the sundry crimes against humanity reported every day in our media. It may well be correct to command joy, but isn’t it also a bit callous?

I have spent a good portion of my life studying philosophical questions about God. I think it is safe to say—and it may be the only proposition that all of us in this area of concern can agree upon—that no one produces philosophical arguments for or against the existence of God that convince everyone who encounters them.

Those suffering the most, if they commit themselves to personal prayer, will hit water before the rest of us.

No need to rehearse them here, as my purpose is to share a personal experience. I often follow an argument for or against God’s existence to its very end and say, “That indeed is convincing.” Yet arguments for the existence of God are not particularly useful when troubles come my way. And those convincing arguments about God being a delusion themselves dissipate when I come to private prayer and simply know myself to be in the presence of an old friend.

I do not think that we are meant to prove God as we would any other fact about the world. I think we were created to meet God, to encounter God’s presence, and this can happen only in prayer.

How can we imagine a different world?
Michael Simone

It is the same with joy. It is to be found in silent, private prayer. Pick your favorite place, your favorite text, your best time of the day or week, and slip away to be with God. Try to open yourself for his presence. Make yourself weak and vulnerable by yearning for God.

In the driest parts of Kansas, we know that if we keep digging we will sooner or later hit water. The same is true of joy when we commit ourselves to prayer. St. Ignatius Loyola once speculated that if the Holy Father were to dissolve his beloved Jesuits, it would take him no more than a quarter of an hour in prayer to recover and to think no more upon it (Memoriale, No. 182).

Oddly enough, those suffering the most, if they commit themselves to personal prayer, will hit water before the rest of us. Remember, “The Lord is close to the brokenhearted, saves those whose spirit is crushed” (Ps 34:19).

Why is bad news so much easier to credit than the good? Even a Martian invasion? Remember, we believe what we want to believe, what we have come to expect. Does joy, for the asking, seem too hard to believe? It won’t, if you pray.