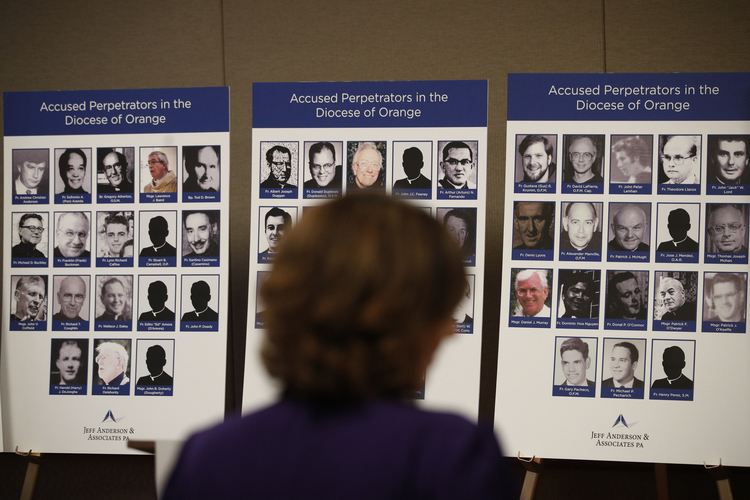 An advocate and survivor of sexual abuse, looks at the photos of Catholic priests accused of sexual misconduct by victims during a news conference Thursday, Dec. 6, 2018, in Orange, Calif. Advocates for survivors of child sex abuse say they have compiled a list of 72 priests who served in the Southern California Diocese of Orange and who are accused of abusing kids. Lawyer Mike Reck on Thursday said that's many more than those reported by the Diocese and demanded greater transparency.

Advocates for survivors of child sex abuse compiled a list of 72 priests they say served in the Diocese of Orange and have been accused of abuse. That's many more than the 14 such clerics listed by the diocese in 2016.

The Archdiocese of Los Angeles on Thursday updated its tally of accused priests for the first time in a decade, adding 54 more for a total of 323 clerics accused in such incidents.

The Archdiocese of Los Angeles on Thursday updated its tally of accused priests for the first time in a decade.

The moves come as advocates demand more transparency and push to hold church officials accountable for child sex abuse cases in counties in California and elsewhere — even when the incidents are too old to bring criminal charges or to sue.

Mike Reck, an attorney for Jeff Anderson & Associates, said the law firm compiled its list using publicly available information including criminal cases, lawsuits and press statements. He said the firm doesn't know the whereabouts of nearly half of these priests, who may or may not still be alive.

"We implore the diocese to do better and to do more, because the survivors deserve more and deserve better," Reck told reporters.

The Diocese of Orange said in a statement that the firm was trying to re-litigate old claims and the church takes any accusations of abuse "extraordinarily seriously." The diocese issued a report in 2016 saying 14 clergy accused of abuse were removed from ministry.

The Archdiocese of Los Angeles covers the counties of Los Angeles, Ventura and Santa Barbara. Most of the priests added to its list were accused in incidents that date back more than a decade; three are accused of incidents occurring since then, said Adrian Marquez Alarcon, a spokeswoman for the Archdiocese.

Many of the priests are now dead, and some of the alleged incidents took place in the 1950s and 1960s. Some clerics came to the Los Angeles area from other countries including Mexico and the Philippines and later left.