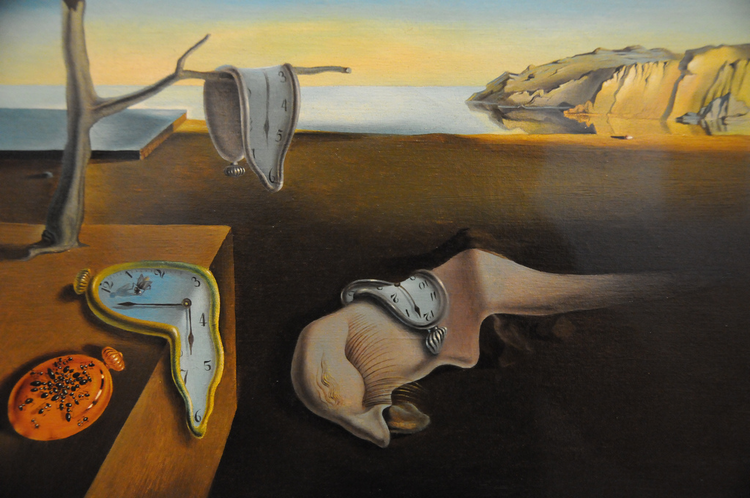 Salvador Dalí, “The Persistence of Memory,” 1931

If someone were to ask, “What time is it?”—perhaps, a question posed often enough during the course of many a homily—most of us suppose that the inquiry could be answered by simply looking at a watch, clock or smartphone. Yet we actually operate with two very distinct senses of time, even if we rarely pause to distinguish them.

The first sense of time can be called “cyclical,” because it is indeed answered by looking at a circle, which never stops repeating, like the face of a watch and before that, in the distant past, by the rising and the setting of the sun or moon or the changing of the seasons. Farmers still work in cyclical time, though the rest of us only move, by convention, through a work week toward a weekend.

Our other sense of time can be called “linear.” It is also easily illustrated. A physician sadly says to us, “We got to her too late to save her.” Or someone says, “We wouldn’t have the government we have today if more people would have voted.” “It’s too late now,” we say.

The Solemnity of Christ the King proclaims as gospel truth the notion that time does indeed have a destiny.

Linear time, the sense that time is going somewhere, has been an essential element of life for centuries. The ancient Hebrews believed that time moved forward according to the promise and the will of God. Karl Marx only secularized this notion when he taught good communists to await the day when everyone in the world would see the sense in sharing our goods and resources. Then we would arrive at heaven on earth, so to speak.

Politics is premised on a linear sense of time. Either we are moving toward a more socialist future, one which cares for all of us and our environment, or we are making America great again by preventing that. But no one runs for office by declaring—what many of us sometimes fear is the truth—that a coming election will not move us any farther in any direction than the last one did.

In her new novel Flights, translated into English by Jennifer Croft, the acclaimed Polish author Olga Tokarczuk introduces a third view of time, a modern one that anyone familiar with jet lag can recognize.

I take a different view of time. Every traveler’s time is a lot of times in one, quite a wide array. It is island time, archipelagos of order in an ocean of chaos; it is the time produced by the clocks in our train stations, everywhere varying; conventional time, which no one ought to take too seriously. Hours disappear on an airplane aloft, dawn issues fast with afternoon and evening already on its heels. The hectic time of big cities you’re in for just a bit, waiting to fall into the clutches of evening, and the lazy time of uninhabited prairies seen from the air.

In other words, we literally erase or add to cyclical time by moving forward or backward as we fly around the world. It is not something calcified by clocks. What about linear time, the notion that time is going somewhere? It still exists, but it has been shattered into personal shards. People are rushing through cities toward goals that are incomprehensible to someone looking at prairies from the window of a plane.

Something that happened more than 2,000 years ago will draw all of time, all of the longings of the human heart, into itself.

Some of us, for example, are eagerly calculating the years to retirement. Some of us are sadly counting the months since we have lost someone whom we loved. The person next to you may be trying to guess how accurate an oncologist is about how much time is left. Someone in a miserable marriage or an abusive home might feel that time simply will not move forward.

Of all God’s creatures, why do only humans worry about the future?
Terrance Klein

How can we speak the truth in love?
Michael Simone

The image that best captures our modern sense of time, says Tokarczuk, is the airport terminal, which has become something of a self-contained city. You can dine, shop, seek medical help, worship and attend conferences in airports. Here everyone is going somewhere but, for as long as they are in the terminal, they are going nowhere. Some are racing ahead, while for others time seems to have stopped. We are all together and all alone in time.

Tokarczuk also aptly captures both the hope and the dread of linear time, which helps to explain why so many today would rather live in their own, self-constructed, going everywhere and nowhere, airport time. In biblical, linear time:

Every moment is unique; no moment can ever be repeated. This idea favors risk-taking, living life to the fullest, seizing the day. And yet the innovation is a profoundly bitter one; when change over time is irreversible, loss and mourning become daily things. This is why you’ll never hear them utter words like “futile” or “empty.”

The Solemnity of Christ the King, which closes another year in the seemingly endless cycle of liturgical years, proclaims as gospel truth the notion that time does indeed have a destiny. Christians can still speak of the “year of Our Lord,” counting time forward from the savior’s birth, even though the modern world continually resets clocks and calendars, and every soul among us stands in a different moment in time, one too personal to be shared.

It is an astounding claim: that something which happened more than 2,000 years ago, in linear time, nevertheless will draw all of time, all of the longings of the human heart, into itself. Christ, at a given moment in time, will be manifested as the one who collects, who harvests all of time. He will draw the hopes and struggles of each of us into himself. Is this a delusion, a fantasy? Time will tell.

The Solemnity of Christ the King is now the Solemnity of Our Lord Jesus Christ, King of the Universe and "proclaims as gospel truth the notion that time does indeed have a destiny" -- a destiny for all of creation!

May you keep the expression of God along these lines, it will likewise keep you. Jesus distinguishes himself with the poor of each sort and makes dynamic love toward them the condition for entering his kingdom. I am inspired by your write up, thank you for sharing this great post here. Keep writing and posting. Good luck..
Thank you
https://dissertationcapital.com

Thank you, Father, for an important perspective.