Catholic women are leaving the church. This group wants them to lead it. 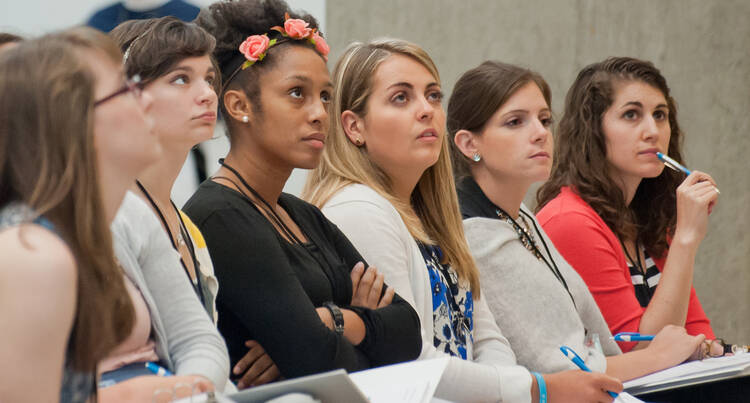 The GIVEN Institute is trying to fix that. This week we chat with Elise Italiano, the group’s executive director, about what they’re doing to help Catholic women lead inside and outside the church.

On Signs of the Times, our weekly Catholic news roundup, we scratch our heads at the U.S. bishops’ inaction on sexual abuse at the annual meeting in Baltimore, look at the next U.S.-born #Blessed, see how an N.B.A. rookie is helping out his Catholic high school, and more.

Catholic women are leaving the church.

Mr. Cosgrove---In one of the articles in American Magazine you appeared to be frustrated with some readers’ claims that some of Trump’s rhetoric creates an environment for anti-Semitics. You disagreed and said you could point out the “site that discusses Obama's harangues against Jews.” At that time, I posted a comment to you stating that I am very interested in reading the site and would you please tell me what it is. You did not respond so I am asking you again to please tell me. Thank you.

Thank you. I often refer to other's opinions and this is a case in question. The article in question had to do with Obama going on about the opposition to his Iran policy was coming from Jews and he did not refer to them as Jews but in a condescending way. He was also talking to several liberal Jews during the conversation so you can rightfully argue that it was not anti semitic per se. So it is hardly a smoking gun. http://bit.ly/2Ftv35i

It seems that some here think that only they know "why one should be Catholic" and that those who don't see things exactly as they do "haven't been taught". Well, that's simply untrue.

But what is worse than the arrogance and assumed superior understanding on the part of those like Mr. Cosgrove, are the sheer nastiness of some of the commenters . They call themselves Catholic, but it is quite clear that they are not even christian. Mr. Cosgrove seems to have not read the gospels carefully, but at least he doesn't resort to vulgar insults. I'll give you that much, Mr. C.

Those who do resort to nastiness instead of polite comments (Mr. Zorin, for example) should refrain from commenting since they seem unable to follow the comments policy.

I said two things about this issue: First I have never seen anything on this site as to why one should be a Catholic. Second, I point out what I was taught in 16 years of Catholic education including a Jesuit education as to why Catholicism is the best way for salvation. For that you chastise me. Why don't you tell us why one should be a Catholic? Certainly the Jesuits here or their authors aren't doing it.

I am all for women working for more recognition inside the church, but I hope that they would start forming their own church without waiting for a bunch of old celibate patriarchs to change.
Being a modern christian woman does not require that you conform to someone else's hierarchy that was formulated by a monarch/pope 500 years ago. There are plenty of opportunities for women to be evangelists and apostles in 2018. Carpe Diem!

If you think the Church was formed by a pope , then anything goes, doesn't it?. .........I wouldn't belong to any 'church' unless I believed God Himself started it. I'm not into social clubs...and most Catholics I know aren't either.

Alienation to the point of leaving. It can start small, accumulate, and then one incident can do it. The women I know who have left the church started by rejecting as absurd the reasoning on contraceptives, then the stubborn and aggressive promotion of the ban against contraception, then the harm this rationalistic ban was doing to real human beings. Thus the credibility of the church teachings became a matter of either rejecting this or that, or ignoring the "teaching church" altogether in order to continue a spiritual satisfaction and transformation through the sacraments. But what really did it was snarky sarcasm from the pulpit (example, sneery comments about Adam and Steve). And most of all the arrogance (a guest prelate ordering the wife of the house around, a priest scolding a child in front of people because he called the priest Father rather than Monsignor). This witnessing of behavior in priests that they would not tolerate in their children led to the conclusion that the Catholic church could not possibly be related to the spirit of Christ. Other women left as a result of thoughtful conversations with their daughters who had ceased to buy the Catholic church in high school. These were still saddened for the good Catholic people they knew by the sex scandal and the loathsome cover up by the bishops. And horrified for the victims. None of them have missed "going to church." Efforts to keep women and bring them back will work to some extent but, except for very conservative women, the abandonment of the church by women will continue.

Zac Davis: why is this group only for " young women" What, who is young? I am not what is considered young, but I am highly educated, Graduate degrees in Theology, a former professional career involving the Church, not to mention an open mind, and tons of life experience! Can I get a position in parish ministry? Not to save my life. Have been invited to join the Anglicans, however......

60% of White Catholics voted Trump. Why would any woman want to be associated people who despise women?

To get judges appointed who will stop the expansion of abortion 'rights', judges who will respect religious rights to not be forced participate through taxation, or by happenstance of employment, or any other way in these obscene, supposedly 'private' killings between women and their doctors......, Do you 'get it' now?

The only thing that will fix the problem of women leaving the church is for the church to treat men and women the same. In this church, that means allowing women to be priests. Creating new "leadership roles" for women won't make up for the disparity between how men and women are seen by Catholicism.

People who are female are "leaving the Church".
Did they ever belong to or belong in, the Church?
What IS the Church?

Choose your own answers and argue the toss as much as you like, will it make any difference?

As far as I can make out, Jesus selected some people and some people asked to be chosen.
Those close to Him were taught, by word and signs and wonders, that He was the promised Messiah.
As Messiah and Redeemer he SENT OUT those who were His to proclaim the Good News and minister is a similar way to His own after he had decided that their formation was finished.

The disciples were disciples sent BY GOD FOR OTHERS, and acted that way.
The fellowship of the Holy Spirit exists for evangelising the whole world and as far as I can see, whingeing and moaning and complaining about status and position and recognition and rights are simply not appropriate in the lives of true believers.

What MAN has a right to ordination or consecration to shepherd or minister or pastor or evangelist or prophet or teacher? What would be changed in this unworthiness by being a woman?

Time to stop being Marxists and resume being disciples and servants.