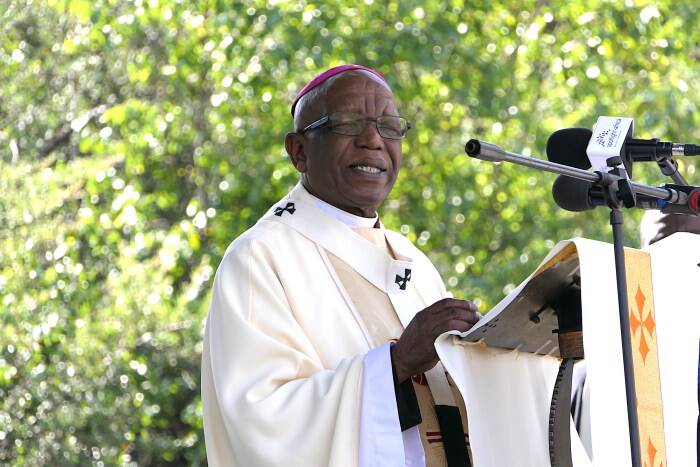 The archbishop of Johannesburg, South Africa, has called for the immediate excommunication of Catholic priests who have sexually abused minors. Archbishop Buti J. Tlhagale was preaching at the ordination of four priests in the Archdiocese of Johannesburg on Oct. 27.

Latae sententiae is the Latin phrase used in church law meaning that a sentence is triggered by the action itself. It applies automatically when a serious church law has been contravened.

“There is palpable outrage against the Catholic Church hierarchy for its complicity, its silence and its cover-ups. For siding [with] and hiding perpetrators at the expense of victims.”

The ordination was taking place against the backdrop of the trial in Port Elizabeth, South Africa, of a 58-year-old evangelical televangelist, Pastor Timothy Omotoso. “Your ordination, gentlemen, to the priesthood, takes place against this unhappy background. These are difficult times,” the archbishop said.

Mr. Omotoso is accused of the rape of one women and trafficking more than 30 girls and women in South Africa.

“It is a false consolation to argue that child abuse does not only happen in the Catholic Church,” the archbishop said. “Child abuse should simply not happen.”

The archbishop reminded the four ordinands, the Revs. Abel Maluleke, Oupa Matseke, Sefako Santawana and Boshom Mpetsheni, of the “hard saying of the Gospel of Mark [18:6]: ‘Whoever causes one of these little ones who believe in me to sin, it would be better for him if a great millstone were hung round his neck and he was thrown into the sea.’

“We restore the church’s good name by our own lifestyle, by our own fidelity and simple honesty,” he said. “Our own moral lapses, our own lives, regrettably marked by broken vows and broken promises, should not dissuade you from making a genuine effort to live up to expectations. To strive in earnest to be the other Christ who brings hope to the people of God.”

The sexual abuse of a minor, among the accusations against Mr. Omotoso, “brings to the fore the raw feelings of anger, of outrage, of bitterness, of frustration, of hatred, even of self-hatred,” Archbishop Tlhagale said, “desires of retaliation, [feelings] of betrayal, of disloyalty, of unfaithfulness, of cover-ups, of a sinister abuse of power and deception.”

Archbishop Tlhagale said that when such cases hit the front pages of newspapers, many people cannot help thinking about the Catholic Church and its plethora of scandals of child sexual abuse across the world. “There is palpable outrage against the Catholic Church hierarchy for its complicity, its silence and its cover-ups. For siding [with] and hiding perpetrators at the expense of victims.”

The archbishop said that the question is: “Who can be trusted?”

“You have a duty to restore the good name of the Catholic Church currently in tatters because of the revelations of scandal after scandal.”

The ongoing revelations of child sex abuse by clergy across the world—most notably in Chile, the United States and Australia, but also in South Africa—have put the Catholic Church in the spotlight again. In July, an U.S. archbishop, Theodore McCarrick, resigned from the College of Cardinals. He was the first cardinal in the history of the church to resign from that body because of allegations of sexual abuse.

Across the world people have expressed outrage, not only at the abuse itself but at the fact that authorities in the church—bishops and religious superiors—have not dealt properly with many of the perpetrators of abuse. There has been a lack of accountability and transparency. Some bishops who covered up abuse or abused minors themselves remained in place for years. At worst, some like Archbishop McCarrick were promoted to higher office in the church.

“As you enter the Catholic priesthood, you must be prepared, dear friends, to carry the burden and the stigma of the moral failure of [the] Catholic priests,” Archbishop Tlhagale said to the ordinands.

“The halo of the Catholic priesthood has been broken. The church is castigated because it appears to have claimed to have a ‘holier than thou’ attitude. We priests claim to be the other Christ. We have set the bar high but fail lamentably to live up to that moral standard, that moral ideal, hence the merciless and the harsh criticism,” Archbishop Tlhagale said.

In October, Pope Francis defrocked two Chilean bishops over child sex abuse claims. The Vatican said that this decision could not be appealed.

Archbishop Tlhagale said that the abuse crisis has caused some people to leave the church. He said to the ordinands: “You have a duty to restore the good name of the Catholic Church currently in tatters because of the revelations of scandal after scandal.”

The archbishop also lamented the state of South Africa. He said that it was visibly “under siege on a number of fronts.” He said that thousands of young people were deeply disillusioned with life and that many communities are frustrated by the broken promises concerning the lack of houses, electricity, water and decent sanitation. “Their dignity is being trampled underfoot just like in the old apartheid days. Their anger is palpable as they resort to destroying public facilities in order to make their voice heard.”

He condemned “defrauding the state, greed, self-enrichment [and] corruption,” saying that these ills point to the fact that there is something fundamentally wrong in the state of South Africa.

He told the four new priests that if they were to initiate any reforms within the church, they must start with themselves first. He said that they must become credible and genuinely honest pastors and shepherds.

He told them that they have a “moral duty, at least, not to make matters worse than they already are.”

Russell Pollitt, S.J., is one of America’s Johannesburg correspondents.

Amen! And also the bishops that covered up and enabled, like Roger Mahony.