Cardinal Gracias: Synod document must be adapted to needs of Asian youth 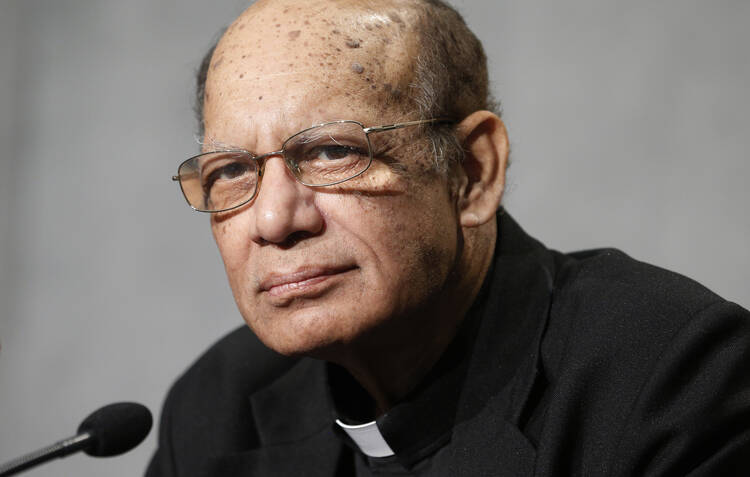 Cardinal Oswald Gracias of Mumbai, president of the India bishops' conference, attends a news conference to discuss the Synod of Bishops on young people, the faith and vocational discernment at the Vatican Oct. 9. (CNS photo/Paul Haring)

As the synod on young people drew to a close, Cardinal Oswald Gracias, the archbishop of Mumbai, spoke to America not only about that event and the issues discussed but also about his own plans to adapt the synod process in the church in India—the country with the largest number of young people in the world, 600 million under the age of 25.

While the 73-year-old cardinal has attended many synods over the years, this one made him feel “very happy.” He said it was “a wonderful experience,” especially because of the presence of 36 young people from all continents.

“They fully participated as youth,” he said. “They were yelling; they were happy; their presence was made felt. They had no inhibitions about saying what they felt. I think they also gave us an insight into the mind and the world of the youth and their aspirations, their joys, their hopes for the church and their generosity for the church, which is much more than we anticipated, though, of course, this was a special group.”

The young people “said repeatedly ‘hear us’ and ‘take us seriously’ and asked ‘accompany us,’ ‘be with us.’”

He reported that “the issue of hope for the youth” came out strongly, as did two other themes. The young people “said repeatedly ‘hear us’ and ‘take us seriously’ and asked ‘accompany us,’ ‘be with us.’ This raised the question: ‘How do we accompany them? They have a vocation—how do we help them to discern that vocation?’”

He was struck by “the sense of excitement, joy, the wanting of spirituality” and by their many calls for “good liturgies,” for “the Eucharist to be a point of contact with God.” He recalled: “They feel we have not done enough. For me, this was a very big surprise.”

Cardinal Gracias remarked that “every synod gives you a tremendous exposure to the world situation and the universality of the church.” And while “the basic situation is the same all over” in regard to subjects like the family and globalization, nevertheless what comes through clearly is that “every continent has got its own specific problems.”

He noted that at this synod, “certain issues in the West came out prominently, such as the sex abuse question, the role of women and homosexuality, though the latter was downplayed in the final statement because of the lack of agreement.”

The issues that concern young Asians are, perhaps, different from those of their counterparts in the West.

On the other hand, the question of immigration was an issue that surfaced many times but in different ways depending on which part of the world one came from. Apart from the Rohingya crisis, “which everyone knew about” and was only referred to, the cardinal said Asian participants tended to view migration from two perspectives: as “advantageous” because it helps the local economy, “like people who are working in the Middle East and so on,” but also as “a brain-drain for a country.” He noted, however, “it did not come across strongly as a crisis in Asia as it did in other parts of the world.”

As president of the Federation of Asian Bishops’ Conferences, Cardinal Gracias is well aware that 60 percent of the world’s population lives in Asia, and 60 percent of Asians are under the age of 30. He noted that the issues that concern young Asians are, perhaps, different from those of their counterparts in the West.

“For us the issues are planning a better future, wanting to change society. I think the youth of Asia are generally dissatisfied with the political leadership, with a society where there is becoming a big divide between the rich and the poor, a society where human rights are not fully respected, a society where opportunities are not given and not being planned,” he said. Asian youth “are getting impatient today; you can sense that very much in our continent rather than in other places. These are the really the issues which concern us, which concern our youth.”

“The final synod document” is not a finished product but must be inculturated in the different continents and countries.

Then again, the cardinal asserted that “religion is important in Asia, much more important for the youth and for the people than I think it is in other continents. Asian people are spiritual; God is a factor in their lives. It is not an atheistic culture; it’s not even an agnostic culture. God is present. There is a God who’s part of our lives, our decisions, our whole life framework.”

Having said that, Cardinal Gracias recognizes that “there is a difference in the different religions. I think in Hinduism, for example, to be religious would not necessarily mean to live a religious life; to be religious means going to the temple, doing penance, assuaging the God, but it does not mean, as we have the idea in Christianity, that faith must influence all your works and faith without works is dead. That is certainly different, but God is a factor in daily life in Asia.”

In India, Christians are a minority of the population, a mere 25 million (of these, Catholics are 20 to 21 million) in a country of 1.3 billion people.

Cardinal Gracias views the synod on youth as “a kind of a prototype which we can imitate.”

Cardinal Gracias said he was very conscious at the synod of the different, even contrasting concerns among Catholics that come from the different regions and countries. “This is always the difficulty with a synod: Are we answering the questions of all the world or answering the questions of only one section of the world?” he remarked. He believes “the final synod document” is not a finished product but must be inculturated in the different continents and countries. “Make it an Asian document,” the cardinal said. “Make it an Indian document. See what we need for India.”

He views the final synod document “as a draft text,” rather than a magisterial one. “It has to be adapted by the churches in different parts of the world,” Cardinal Gracias said. “I think that’s the way we should see it. It’s not going to be something which is a universal document. We’ve got to apply it to our own situations. This is meant as the working document for further pastoral programs for the youth in India and Asia.”

Cardinal Gracias is president of both the Latin Bishops’ Conference of India and the Conference of Catholic Bishops’ Conferences of India, which is the umbrella organization for the country’s three different rites. He told America that he intends “to discuss the final document with my youth leaders and priests and see if we need to modify any aspects of it. I’m thinking of proposing that we have the same process as we had in the synod for youth either throughout the church in India, at the bishops’ conference level, or in Mumbai, at the archdiocesan level.”

He views the synod on youth as “a kind of a prototype which we can imitate.” He hopes “to begin with a two- or three-year project, working toward a youth assembly” and envisages that the synod’s final report “will serve as a working document from which we can move forward and outward” as a “missionary church.” He views this as a step toward building what Pope Francis has calls “a synodal church.”

[Explore America's in-depth coverage of the Synod on Young Adults]