What baby boomers owe the next generation of Catholics

What baby boomers owe the next generation of Catholics 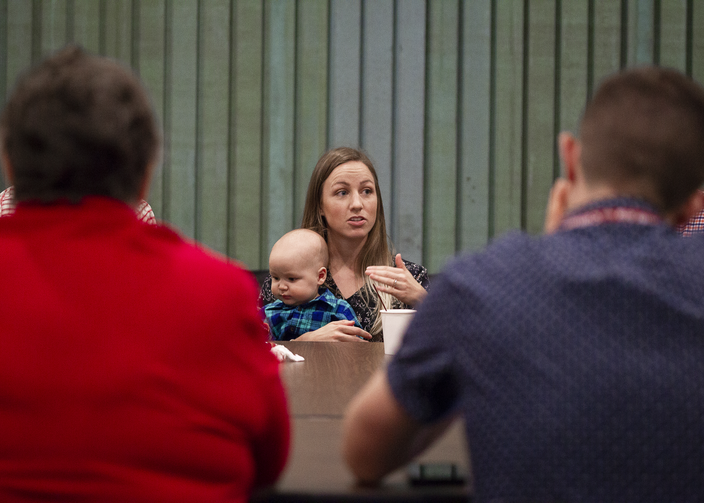 Tanelle Pearson is seen with her 7-month-old son during a breakout session on May 16 at the National Young Adult Ministry Summit at the St. John Paul II National Shrine in Washington. (CNS photo/Tyler Orsburn)

A segment on Comedy Central’s “The Daily Show” caught me off guard this past September. The comic Neal Brennan began his riff saying, “Republicans, y’all need Jesus”—advice that, as an atheist, he never thought he would give. He then added, “Like many atheists, I grew up Catholic.” Then he paused for the laughter, a knowing look on his face.

Ouch. That hurt my heart—but it was not gratuitous. Thanks to our clerical sexual abuse scandals making us a disturbing presence in the headlines these days, we earned that slap. It is hard to make a case for Catholicism to young people right now. Many of them see the institutional church as a toxic environment.

I remember being that atheistic young person, just like Neal Brennan. Though I am a cradle Catholic, there was a time when I believed in nothing but the present tense. The grown-ups in the pews were the faces of hypocrisy and bigotry, as far as I could tell. By the grace of God and some solid theology courses, I came back. Somehow, I outgrew the judgmental fundamentalism of my elders, even as their rigidity poisoned many of my generation. Somehow, I saw a future for the work of Jesus in the church.

It is hard to make a case for Catholicism to young people right now.

But I don’t know that, as a young person, I would be strong enough to do so today. We are poisoning a whole new generation, hiding the light of the Gospel message under a bushel basket of duplicity and dysfunction. We seem like a private club, and a sexist one at that.

At my own parish and indeed at every parish where I attend Mass while traveling, I see mostly old people. My parents have both died, and we baby boomers are increasingly taking the place of—and turning into—the old people. Perhaps it is some perverse rite of passage that, as we become insular and lose sight of the church’s mission of outreach, we poison the next generation against becoming like us. Perhaps the young people have always had to make their way back to the church in spite of the example of their elders, who mistrust them and push them away out of fear of the future.

My daughters, millennials all, grew up with a mother who worked for the church. Because they were always there, they participated more than most people in parish activities. My girls served at soup kitchens and delivered Christmas baskets, fasted for fundraisers and sang for the old folks in care facilities. I have noticed with quiet joy that their early training in social justice has adult ramifications. They may not practice their faith, but they burn with the calling to do some good in the world. They are unsatisfied in jobs that do not fulfill that need, and they look for ways to bring justice and mercy to their particular communities. They almost cannot help themselves. It is one of the lasting legacies of growing up Catholic.

We supposedly religious folks have some spiritual work to do.

I admit that like many Catholic mothers, I have not stopped gently encouraging my adult daughters to go back to church. I have embraced the story of the persistent St. Monica. I have kept the faith. I stand for the validity of my lesbian daughter’s baptism as a child of God. I have heard one daughter reverently explain the Eucharist to her astonished Jewish fiancé. I have reminded my youngest daughter of the comfort of heart and silence of soul she once found during Mass. The seeds of Catholicism may lie dormant in my daughters, but the seeds have been planted. Have I done my best? I don’t know.

As the church faces another crisis, look to women for help
Valerie Schultz

I was so happy when my oldest daughter joined a welcoming and inclusive parish and became active in ministry there. Recently, however, she noticed police cars around her neighborhood church. The police had been called because vandals had spray-painted her church with anti-gay slurs, specifically targeting her friend, the pastoral associate. He had been under virtual and actual attack by members of far-right groups that identify as Catholic. Imagine: fellow Catholics, tagging a church. He has since resigned his position, citing concern for the safety of his family, especially now that his home address has been published online. Can we blame him? Of course not. But the whole church loses every time we lose someone like him.

Such hurtful and shameful behavior by these rancid groups further poisons a generation of young people who increasingly refer to themselves as spiritual but not religious. They seek God, but they reject the institutional church, reeking as it does with hypocrisy and sexual scandal and the politics of exclusion.

I am using harsh words deliberately because I believe we should not be complacent about the next generation’s flight. The church needs our young people. But we elders cannot nurture them in the faith if we repel them. We cannot share with them the joy of the Gospel, as Pope Francis cajoles us to, if we signify to them everything that is wrong with religion. We cannot teach love by modeling hate.

We can say that we trust that the Holy Spirit speaks to the next generation of believers, but we must help rather than hinder that call. We supposedly religious folks have some spiritual work to do.

"We seem like a private club, and a sexist one at that. " Yes - Although, we definitely are a sexist church - we don't just seem to be one. It is written into our canon and must be expunged!

"I am using harsh words deliberately because I believe we should not be complacent about the next generation’s flight. The church needs our young people. But we elders cannot nurture them in the faith if we repel them. We cannot share with them the joy of the Gospel, as Pope Francis cajoles us to, if we signify to them everything that is wrong with religion. We cannot teach love by modeling hate."
ALL TRUE BUT POPE FRANCIS NEEDS TO LEARN TO NOT MODEL SEXISM AND HATE TOO AND HE HAS NOT LEARNED THAT YET AND HIS REFUSAL TO ORDAIN WOMEN PRIESTS AND ACCEPT ROMAN CATHOLIC WOMEN PRIESTS WHO HAVE ALREADY BEEN ORDAINED BY LEGITIMATE CATHOLIC BISHOPS OR EVEN ALLOW WOMEN A VOTE AT THIS SYNOD IS PROOF ENOUGH OF THAT.

This article was excellent and I don't see as many excellent articles in America this last year as I used to so it is a nice surprise.

It seems that most of the things mentioned in this article appear to me to be common sense. In other words, I did not discern anything new or frankly inspiring.

As a baby boomer, it seems that every family in my neck of the woods has at least one person (mostly only one) who goes to weekly Mass and strives, as best as possible, to teach their loved ones by example what is important in life. In other words, never to lose our faith and trust in Christ even when His Church does not seem to be very welcoming, understanding, or pastorally realistic (e.g., its treatment of LGBT Catholics and its refusal to change many moral teachings) or very holy or credible (e.g., given the clergy sexual abuse crisis).

Most families, especially young Catholics, seem to be spiritual but not religious and most of them strongly disagree with many of the sexual ethical teachings of the magisterium. Many young Catholics have been leaving the Catholic Church for the past 40 years, and the hierarchy does not have a clue what to do about it. Given the news reports from the Synod on Young People, so far, it does not seem that anything will change. The latest article mentioned something like young people must be challenged. The word 'challenge' to me seems to be a euphemism that means "abide by all the moral teachings of the magisterium'. Let's pray for responsible changes and the courage to do so.

Thank you...the points in this article are important and need to be said over and over again.

Thank you...the points in this article are important and need to be said over and over again.