Archbishop Scicluna does not expect ‘quick answers’ from Synod on abuse 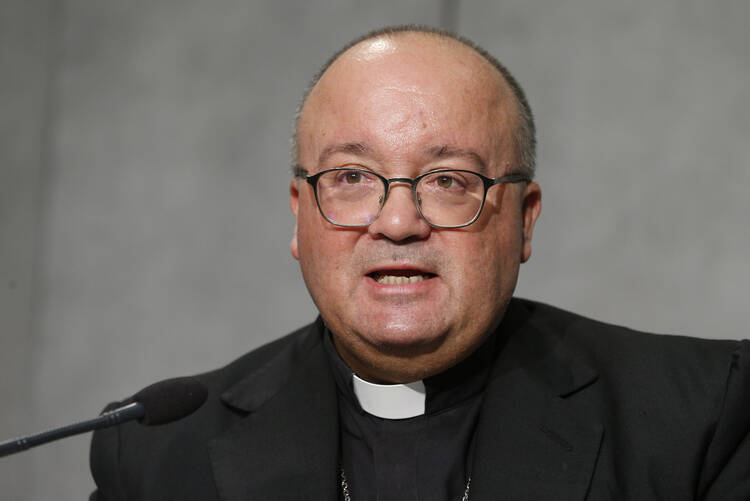 Archbishop Charles Scicluna of Malta speaks at a news conference to discuss the Synod of Bishops on young people, the faith and vocational discernment at the Vatican Oct. 8. (CNS photo/Paul Haring)

While the question of the sexual abuse of minors by clergy has been raised in every working group at the Synod of Bishops on young people, Archbishop Charles Scicluna, the Vatican’s former chief prosecutor in this field, said he did not expect any “quick answers” to this question to come from the synod.

At a Vatican briefing on Oct. 8, the archbishop reminded reporters that “the synod is not about the abuse of minors, it has to deal with many other questions, too.” He stated that “the proper forum” for addressing the abuse question is the meeting with presidents of the more than 130 bishops conference that Pope Francis has called for Feb. 21 to 24, 2019. He expects “the question of accountability” of bishops and the heads of religious orders to be on the agenda of that gathering, and not just the question of prevention. He is not involved in organizing it, he said, but he will be present at the meeting as president of the bishops’ conference of Malta.

"I am a direct witness of how much the pope suffers at the slowness of our justice.”

Speaking from his own experience of working with victims in many countries, he said “I’ve found in them a great hunger for justice, but sadly it takes so long to get justice (in the church), and this is what pains Pope Francis so much…I am a direct witness of how much the pope suffers at the slowness of our justice.”

Archbishop Scicluna reminded everyone that besides the church’s effort to do justice “there’s also the civil justice.”

“If there is a civil crime then one has also to respect the civil jurisdiction, and submit to it,” Archbishop Scicluna said. “As Pope Benedict XVI said in his letter to the Irish people, the one who is guilty must submit himself also to the consequences.”

As archbishop of a small church in Malta, he said, “I have also learned that I need the assistance of experts. I cannot just trust my own abilities.” The archbishop has set up “a group of lay experts who do the investigation. They provide me with evidence for the judgment. And this leaves me more serene to be a pastor in the service of the truth.”

The archbishop, who is president of the “tribunal for appeals on cases of abuse in the Congregation for the Doctrine of the Faith”, said he has found “a great hunger and thirst for justice” not just among the survivors and victims of abuse but also among the many young people with whom he has spoken in these years.

“We know that most victims are young people, and so when we are talking about young people we also have to talk about their wounds,” Archbishop Scicluna said. “This is an unfortunate wound inflicted by the very people who should heal rather than wound. It is truly tremendously tragic.”

When asked what he would say to young people who have suffered the tragedy of abuse, the Maltese archbishop responded, “I’d have little to say. I’d rather cry with them, as has happened to me many times. Faced with this tragedy, silence and crying is the first response.” But then there must be a response to the “great hunger for truth and justice” that they feel; a response “which is not incompatible with mercy because we all have need of mercy. But mercy is emptied if it does not respect truth, and call sin a sin and do justice,” the archbishop said;

When asked what he would say to young people who have suffered the tragedy of abuse, the Maltese archbishop responded, “I’d have little to say. I’d rather cry with them, as has happened to me many times. Faced with this tragedy, silence and crying is the first response.”

Archbishop Scicluna recalled a “very important moment” at the synod when Archbishop Anthony Fisher, O.P., of Sydney made a “mea culpa” and asked forgiveness for what clergy in Australia had done to so many young people. “I think he was interpreting most of our feelings,” Archbishop Scicluna said.

He noted that Pope Francis “is surrounded by 260 bishops from all over the world that say we have to move from beautiful words to action. He is obviously empowered to do what he really wants for the church and that is to make the church a safer place and to get different cultures and conferences of bishops to implement what is now policy in the church.”

He recalled that in 2011 the Congregation for the Doctrine of the Faith sent a letter to every conference of bishops in the world asking them to produce guidelines that were subsequently submitted for review to the same congregation. “There are these guidelines” which enable them “to work in the grassroots to empower people to disclose abuse but also to raise the threshold of accountability,” the archbishop said.

He also recalled that in June 2016, Pope Francis issued a motu proprio,“Like a Loving Mother,” that is “a special law on the ways to denounce bishops for negligence.”

“This is a very strong message that we bishops are not only accountable to our consciences and to God but also to our people. The word is stewardship, and the word is protection,” Archbishop Scicluna said.

When asked how he would encourage young people to still have hope in the church despite all the negative things they may be hearing in this period, Archbishop Scicluna said, “It is not about the Church, it is not about the Bishops. It has to be about Jesus. If you find Jesus, then you want to be with his family. You know the family is not made of saints. There are lots of sinners there. Join the club. But there are sinners who have been touched by God’s mercy. And you have a thirst. Your thirst is a love for God and a love for Jesus. So, before worrying about what the Church is about, concentrate on the tender loving face of Jesus, the face of the Lord’s mercy, and then you can be part of this family, that is full of sinners!”

There are many wonderful voices are emerging as a result of this Synod. Obviously, abuse is not the focus, but we are hearing a lot from those who are privileged to Francis' thoughts and get a real sense of his commitment and direction for the Church, as well as their own special insights into this tragedy.
These are great interviews , thanks.