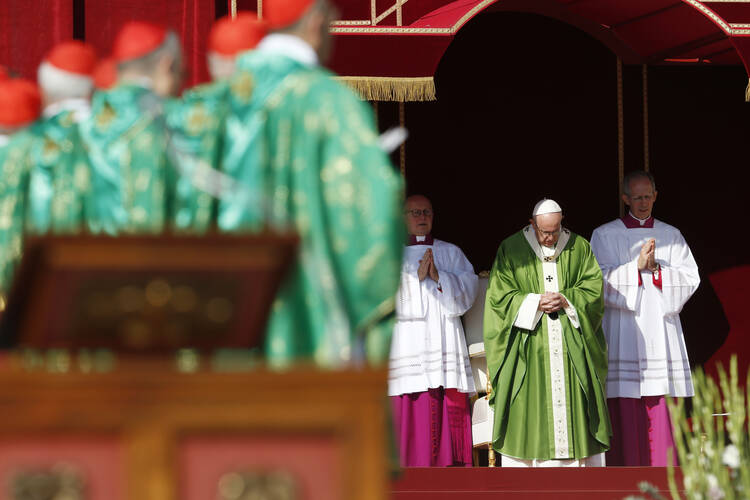 Pope Francis celebrates the opening Mass of the Synod of Bishops on young people, the faith and vocational discernment at the Vatican Oct 3. (CNS photo/Paul Haring)

At the opening Mass for the synod on young people in St. Peter’s Square on Oct. 3, Pope Francis prayed that the Holy Spirit may grant the 267 synod fathers participating in it “the gift of dreaming and of hoping” so that they may in their turn “be able to anoint our young people with the gift of prophecy and vision.”

Describing this synod as a “moment of grace for the whole church,” Pope Francis prayed that the Holy Spirit “may help us to preserve the memory of the Lord” and “give us the grace to be a memory that is diligent, living and effective, that does not allow itself from one generation to the next to be extinguished or crushed by the prophets of doom and misfortune, by our own shortcomings, mistakes and sins.”

Those last words were interpreted as a reference to the sexual abuse and financial scandals that have impacted the faith of many young people and undermined the ability of the church to bring the Good News of the Gospel to the world.

Pope Francis prayed that the Holy Spirit “may help us to preserve the memory of the Lord.”

The Mass was in Latin, with readings and prayers in Italian, Spanish, Portuguese, English, Chinese (prayer for the pope), Arabic and Swahili. Pope Francis, wearing green vestments, underlined in his Italian homily the importance of “listening” to what the Spirit of God is saying to the church in the 21st century, when a quarter of the world’s population (1.8 billion people) is between the ages of 16 and 29. He prayed that the Spirit would help them “discern” the paths the church should at this moment in history in its relation to young people.

It is “with this attitude of docile listening to the voice of the Spirit, we have gathered from all parts of the world,” he told the 267 synod fathers (including cardinals, major archbishops of the Eastern-rite Catholic church, 181 bishops elected by their bishops conferences and priests, with a right to vote in the synod’s deliberations) from more than 130 countries gathered before him. Other synod participants listening to him included 23 experts and 49 auditors from all continents, including 36 women and 34 young people under the age of 29. He reminded all of them that Jesus gives his disciples “the assurance” that the Holy Spirit who is “a constant source of joy and freshness…will accompany all their missionary work.”

Then, in a voice tinged with emotion, Francis declared, “today, for the first time, we have also with us two bishops from mainland China. We offer them our warm welcome.” The thousands of pilgrims from all continents gathered in the square this sunny morning applauded enthusiastically the two bishops who arrived in Rome yesterday and represent China’s 12 million Catholics: Joseph Guo Jincai, 50, of the newly established Chengde diocese (Hebei province), one of the seven bishops Francis reconciled to the full communion on Sept. 23, and John Baptist Yang Xiatong, 64, of Yan’an diocese (Shaanxi province).

It is the first time since Paul VI established the synod of bishops in 1965, during the concluding session of the Second Vatican Council, that bishops from the Peoples’ Republic of China have been allowed to attend a meeting in the Vatican. Their presence is the first fruit of the provisional agreement signed by the Holy See and China in Beijing on Sept. 23. Francis emphasized that with their presence “the communion of the entire episcopate with the successor of Peter is yet more visible thanks to their presence.”

Pope Francis told them, “hope challenges us, moves us and shatters that conformism which says, ‘it’s always been done like this.’"

He called on all participants to begin this synod “anointed by hope,” a synod that “can broaden our horizons, expand our hearts and transform those frames of mind that today paralyze, separate and alienate us from young people, leaving them exposed to stormy seas, orphans without a faith community that should sustain them, orphans devoid of a sense of direction and meaning in life.”

Pope Francis told them, “hope challenges us, moves us and shatters that conformism which says, ‘it’s always been done like this.’ Hope asks us to get up and look directly into the eyes of young people and see their situations. This same hope asks us to make efforts to reverse situations of uncertainty (precariousness), exclusion and violence, to which our young people are exposed.”

He said the young people today “call us to join them in facing the present with greater commitment and to work against whatever prevents their lives from growing in a dignified way. They ask us and demand of us a creative dedication, a dynamism which is intelligent, enthusiastic and full of hope. They ask us not to leave them alone in the hands of so many peddlers of death who oppress their lives and darken their vision.”

He told synod participants that “the capacity to dream together that our Lord offers the church today” requires “one specific attitude: Let each of you look not only to his own interests, but also to the interests of others.” It also requires “that we aim even higher, humbly considering others to be better than ourselves” and “in this spirit we will try to listen to one another, in order to discern together what the Lord is asking of his church.”

As much as Matthew here is really inspired by Jerry, I have to reply to his comment just to get on the first page of comments on this article.

Now for my question: Is Pope Francis F$%#ing kidding - Is this synod just sarcasm towards women and young people?!

Nothing says I am completely deaf to you like the below quotes:

Pope Francis told them, “hope challenges us, moves us and shatters that conformism which says, ‘it’s always been done like this.’ Hope asks us to get up and look directly into the eyes of young people and see their situations. This same hope asks us to make efforts to reverse situations of uncertainty (precariousness), exclusion and violence, to which our young people are exposed.” REALLY EXCLUSION? - DO YOU KNOW WHAT THE DEFINITION OF THAT WORD ACTUALLY IS?

"Pope Francis prayed that the Holy Spirit may grant the 267 synod fathers participating in it “the gift of dreaming and of hoping” so that they may in their turn “be able to anoint our young people with the gift of prophecy and vision.”

So now we are told Men give the gifts of the Holy Spirit to us women and men laynothings. Women, and laymen, according to scripture, obtain spiritual gifts directly from God just like the mere men who are bishops and priests that he is venerating. Jesus didn't ask for my Bishop's permission to show me visions of himself and our church. Talk about clericalism and arrogance! The mere EXCLUSION of all WOMEN from a VOTE BY POPE FRANCIS - (and YES IT WAS HIS SOLE DECISION TO KEEP WOMEN WITH NO VOTE IN THIS SYNOD!) PROVES NEITHER HE OR OUR HIERARCHY GIVE A DAMN WHAT WOMEN, OR YOUNG PEOPLE THINK, ENVISION, WANT, OR BELIEVE IS JUST.
THE YOUTH AND WOMEN SHOULD NOT BE TOO UPSET ABOUT THIS THOUGH SINCE POPE FRANCIS CLEARLY DOES NOT CARE WHAT JESUS THINKS ABOUT THESE ISSUES EITHER.

SHAME ON POPE FRANCIS FOR THIS INSULT WITHOUT ANY CAUSE AND FOR HIS CONTINUED HATRED AND ABUSE OF HIS SISTERS. HOW MEAN SPIRITED THIS EXCLUSIONARY DECISION WAS - HOW SINFUL AND HOW NASTY.

Time for real revolution my Catholic Sisters and Brothers. There is no reason we can't all fight aggressively against this all around the world. To start: No one go to any parish that allows a deacon to lead in the absence of a priest, as that is what this hierarchy is trying to push now. Total gender segregation and the total submission of all women to their husbands and all other men in our church. The only way to say NO Way is to fight against any such measures. So Protest against and fight against any Deacon or any married male leadership put in a parish. We all need to start protesting outside chanceries, seminaries, and parishes and Bishop's residences. Time to say it is Times up for Misogyny in our Church! Time to protest in a clear and aggressive fashion that we won't take this anymore and we don't agree with sexism, especially within our religion!

Honestly, it is amazing anyone goes to our church any more. What a sad sham this whole synod is and what an insult to our youth and our women. Shame on us for letting this hatred rule us for so long. Time to take our church back and put it back into the laity's hands. Into the hands of people who want real justice for everyone and who genuinely care about the safety of children.

Pope Francis told them, “hope challenges us, moves us and shatters that conformism which says, ‘it’s always been done like this.’ EVIDENTLY, POPE FRANCIS WOULD HAVE US BELIEVE WE ARE A CHURCH WITHOUT HOPE SINCE HE REFUSES TO DO EXACTLY WHAT THIS STATEMENT DEMANDS TO SHOW HOPE.

I can't imagine anyone giving a damn what this Synod decides or thinks about anything since it is comprised of 100% hypocrites and bull sht artists. Honestly, this article has actually turned my stomach. I have a prayer group to go to tonight and the thought of that is just painful right now. Leave it to our hierarchy to turn prayer into a painful rather than joyful experience. Maybe we should all become Episcopalians.