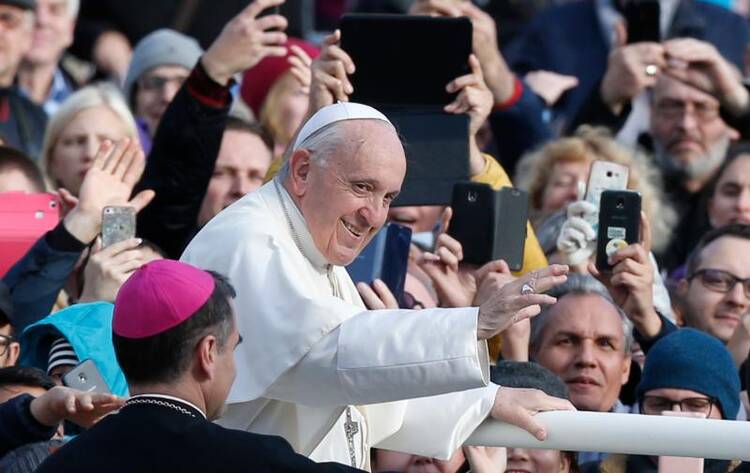 The barricades along the major streets are down. The tents and platforms for camera crews and musicians are folded up and stored away. The festive posters have been battered by some heavy rain and wind. Pope Francis has left.

Pope Francis to Latvians: “It is possible to build unity in diversity.”
Gerard O’Connell

The pope has gone, but the memories remain. The people remember his kind face and friendly gestures. His strong words of courage and challenge echo in their hearts. He is gone but not gone. What Francis accomplished with his quick visit to Lithuania, Latvia and Estonia will endure for a long time.

Ieva Bagdonaitė was one of the students from Vilnius Jesuit High School chosen to greet the pope at the airport. The experience was fun, she said, even though it was raining and they were told they could not take umbrellas. The young people gathered. They talked, laughed and sang their school song together as they waited.

“Suddenly the pope’s plane landed,” she said. “Everyone was excited, cheering. A woman said the pope does not like cheers for himself, so cheer for Christ. Our archbishop came to the stairs and greeted the pope. He looked down, and everybody was cheering, shouting ‘viva il Papa,’ ‘viva Cristo.’” When Francis drove by, he “greeted us from his car, waving at us.”

The pope has gone, but the memories remain.

Agota Bogdzevičiūtė is also from the Jesuit high school. She spends much of her time as a volunteer, especially with refugee children. “I’m their friend,” she said. Was her experience of the pope exciting? “Yes,” she said. “The community feeling, especially the little children. All the people gathered, wanting to hear the words, the message that the pope had prepared. It was exciting!”

Imantas Šimkus is the music director at the Church of St. John Monastery. He directed the music for the pope’s service at the Marian shrine at the Aušro Vartai (Gate of the Dawn). They sang a capella. Their songs included a hymn “Mercy,” which fit one of the pope’s themes and is a title of Mary at this shrine. The music included an Ave Maria that he composed and other Marian hymns. One, “Marija, Marija,” is commonly sung as a resistance against the forces of oppression.

“It is good that the pope came,” he said. “It was very exciting for the choir.” And for all the people, “it is something special. Pope Francis is very popular,” noting that yesterday he “saw important political figures, all the big figures of independence.” It was a great way to mark 100 years of independence.

"He went to the heart of what needed to be said.”

The theme that seems to have impressed most observers that America spoke with was his message to young people. Ernestas Aleksandrovičius is a graduate student in philosophy. “One thing I kept in my heart,” he said, is that “he called the youth to go back to the roots of the nation. Go back to history to keep it in your hearts as we move to the future.” They should not neglect or forget the past, since that was so crucial to the nation’s history. But they have to move on and build a future.

He adds that “from his background the pope is seen as controversial. His teaching about the sacraments, not addressing the ‘dubia,’ scandal, sex abuse and Archbishop Viganò.” He agrees with those who call for analysis: “Go for the truth.”

But his overall impression was very positive. “I heard him when he spoke from the shrine, spoke to the youth, his homily in Kaunas, [his] speech to seminarians, priests. He went to the heart of what needed to be said.”

Commentators repeated the importance of the pope’s message to young people. Ieva Bagdonaitė put it in context:

[It was a] very good idea that he came here. It brought all the people together.... [He] said important things for the nation. It is important to remember we went through a lot. But we can’t stay with our suffering; we have to grow from that experience. I haven’t really known the occupation, but I listened to my great-grandma and great-grandpa, who were taken to Siberia. This was a very hard thing for grandma and grandpa, especially grandma—her parents were taken. Maybe fear, anger are still there. They are real, but, as the pope said, we have to move on, make new experiences.

Ieva’s classmate Agota remembered: “He told us, ‘Be courageous, not fearful. Go with your heart.’”

“He told us, ‘Be courageous, not fearful. Go with your heart.’”

The spirit of Pope Francis will remain in Lithuania for a long time to come. And its power could have impact well beyond the Baltic states he visited this week. Jonas Boruta, S.J., the retired bishop of Telšiai in western Lithuania, reflected: “It would be good if the whole church turned in the direction that the pope faces. He is not for the elite but for everybody.” Everybody can take to heart his message to build a future that is better for all.