Pope Francis in Estonia: Church must convert to reach young people turned off by scandal 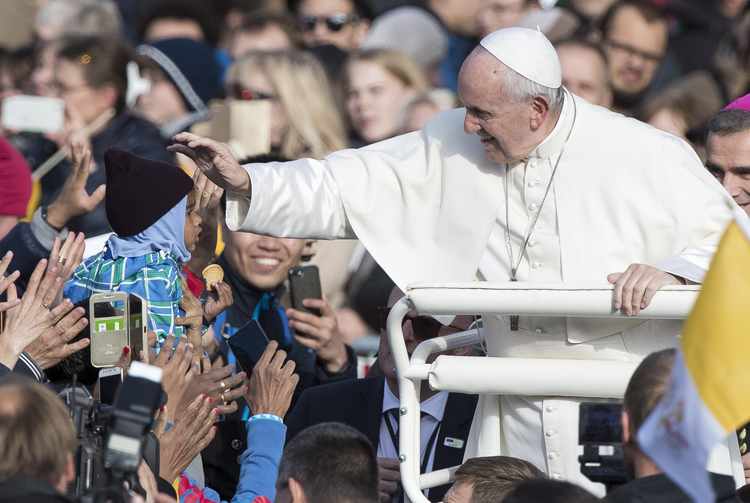 Pope Francis caresses a child as he arrives to celebrate a Mass in Freedom Square, in Tallinn, Estonia, Tuesday, Sept. 25, 2018. (AP Photo/Mindaugas Kulbis)

On the fourth and final day of his Baltic pilgrimage, Pope Francis acknowledged that the sex abuse scandals rocking the Catholic Church are driving people away and said the church must change its ways if it wants to keep future generations.

Francis told a gathering of young people in largely secular Estonia that he knew many young people felt the church has nothing to offer them and simply does not understand their problems today.

The pope said he knows that young people “are upset by sexual and economic scandals that do not meet with clear condemnation, by our unpreparedness to really appreciate the lives and sensibilities of the young and simply by the passive role we assign them.”

The pope said he knows that young people “are upset by sexual and economic scandals that do not meet with clear condemnation.”

He acknowledged their complaints and said: “We ourselves need to be converted; we have to realize that in order to stand by your side we need to change many situations that, in the end, put you off.”

Earlier in the day, the first woman president of this small nation of 1.3 million people in northeastern Europe, Kersti Kaljulaid, expressed “great pleasure” as she welcomed him at the presidential palace in Estonia’s capital, Tallinn.

In her welcome address, attended by the country’s political and civil society leaders, Ms. Kaljulaid recalled that the friendship between Estonia and the Holy See dates back to 1918 when the country declared its independence. She recalled that the Holy See “never recognized the occupation of Estonia” and that “with its moral and political authority, the Holy See was a source of spiritual power for European nations held captive by communism. It gave them inspiration to regain their freedom.” With their regained freedom, she added, Estonia has enshrined the freedom of religion as “one of the unyielding rocks on which our democracy is founded.”

“We have to realize that in order to stand by your side we need to change many situations that, in the end, put you off.”

Ms. Kaljulaid went onto speak about themes that are close to the heart of Francis and also at the center of Estonian governmental policy. “Dealing with climate change is the critical question of our age,” she said. She emphasized that it is “the shared responsibility of us all to find solutions to the world’s problems, be they the sufferings of people fleeing atrocities and war, climate change and migration problems, or poverty.” In this respect, she said, “even the smallest countries and nations can be leaders.”

In his response, Pope Francis praised the “resilience” of the Estonian people in the face of adversity and how they “had to endure at different times in history, moments of bitter suffering and tribulation.”
Over the last 25 years, he noted, “Estonian society has taken ‘giant steps’ forward,” and this small country has become “a leader as concerns the indices of human development and the capacity for innovation; it also ranks high in the areas of freedom of the press, democracy and political freedom.”

Noting that Estonia is perhaps the most digitally advanced country in Europe, the pope reminded them that “one of the evident effects of technocratic societies is a loss of meaning in life and the joy of living.” There is also the risk of losing “a sense of belonging and commitment to others, of being rooted in a people, a culture and a family.”

Despite its support for religious freedom, Estonia is today classified among “the least religious” countries in the world.

Consequently, the pope said, “one of the most important obligations incumbent on all of us who have social, political, educational and religious responsibilities has to do precisely with how we can keep building bonds.”

He assured them that they can “always count” on the support of the Catholic Church in this effort.

After the official welcome ceremony, Pope Francis drove to the Kaarli Lutheran Church for an ecumenical meeting with hundreds of young people and was given a rousing welcome by a large choir of Estonian children.

Despite its support for religious freedom, Estonia, which was first evangelized in the 13th century and then embraced the Protestant Reformation in the 16th century, is today classified among “the least religious” countries in the world: Some 70 percent of its citizens declare themselves “non-religious,” another 16 percent profess to be Russian Orthodox, 10 percent are Lutheran and 0.5 percent Catholic. It has the highest rate of irregular family situations in the European Union and a high divorce rate.

“I am here to tell you that we want to mourn with you when you mourn, to accompany and support you.”

After being welcomed by the archbishop of the Estonian evangelical church, Urmas Viilma, and listening to testimonies from three young people, Francis spoke.

“Dear young friends,” he said, “it is wonderful for us to come together as believers in Jesus Christ.”

“If we try to see ourselves as pilgrims journeying together, we will learn how to entrust our heart to our traveling companions without fear and distrust, looking only to what we all truly seek: peace in the presence of the one God.”

He acknowledged that often young people “can feel that the adults around you do not appreciate your hope and desires; sometimes, when they see you very happy, they get suspicious; and if they see you anxious about something, they downplay it.”

“Many young people do not turn to us for anything because they don’t feel we have anything meaningful to say to them.”

He recalled that in the consultation for the synod on young people that starts on Oct. 3, many young people “expressed the desire to have a companion along the way, someone who can understand you without judging and can listen and answer your questions.” But, the pope said, “our Christian churches—and I would say this of every institutionally structured religious organization—at times bring attitudes that make it easier for us to talk, give advice, speak from our own experience, rather than listen, be challenged and learn from what you are experiencing.”

Francis told his attentive young audience, “Today, I am here to tell you that we want to mourn with you when you mourn, to accompany and support you, to share in your joys, and to help you to be followers of the Lord.”

He said he knows that “many young people do not turn to us [pastors] for anything because they don’t feel we have anything meaningful to say to them. In fact, some of them expressly ask us to leave them alone, because they feel the church’s presence as bothersome or even irritating.”

Pope Francis: “Love is not dead. It calls us and sends us forth.”

Francis told his audience: “I marvel that, for all our lack of witness, you continue to discover Jesus in our communities.... Beyond all our limitations and divisions, Jesus is still the reason for our being here. We know no greater peace of mind can be found than by letting Jesus carry our burdens.”

“We know that many people still do not know him,” Francis said, “and live in sadness and confusion.” Ten years ago, he recalled, Kerli Kõiv, a famous Estonian singer, said in one of her songs: “Love is dead, love is gone, love don’t live here anymore.”

He recognized that “many people have that experience: They see that their parents no longer love one another, that the love of newlyweds soon fades. They see a lack of love in the fact that nobody cares that they have to migrate to look for work or look askance at them because they are foreigners.”

Pope Francis to Latvians: “It is possible to build unity in diversity.”
Gerard O’Connell

“It might seem that love is dead,” Francis said, “but we know that it is not and that we have a word to say, a message to bring, with few words and many actions. For you are a generation of images and action, more than speculation and theory.” And, he added, “that is how Jesus likes it, because he went about doing good, and when dying he preferred the striking message of the cross over mere words.”

He concluded his talk by repeating: “Love is not dead. It calls us and sends us forth. Let us ask for the apostolic strength to bring the Gospel to others and to resist the tendency to see our Christian life as if it were a museum of memories.”

Later in the afternoon, Pope Francis celebrated Mass in Tallinn’s Freedom Square, for thousands of Estonians and Catholics who came from Finland.

Afterward, he drove to the airport and took an Air Baltic plane back to Rome. He is scheduled to give a press conference on the flight home.

Does this mean the Pope is going to lead the way and remove men from office who are guilty of sex abuse and covering for abusers?

Of course not. He began his pontificate with Cardinal Daneels by his side, a man who was caught on tape trying to intimidate a victim of abuse into silence and telling the victim that he needed to apologize to his abuser. Francis has never met an abuser for which he didn't have words of mercy.

If only he showed the same mercy to people trying to expose corruption in the Church.

"The Church" doesn't need to convert. Pope Francis the merciful who is merciless towards the victims of sin needs to convert from being a moral relativist to the Catholic religion, which venerates the liberating and healing moral absolutes of Jesus Christ that Francis ridicules as rigidity.