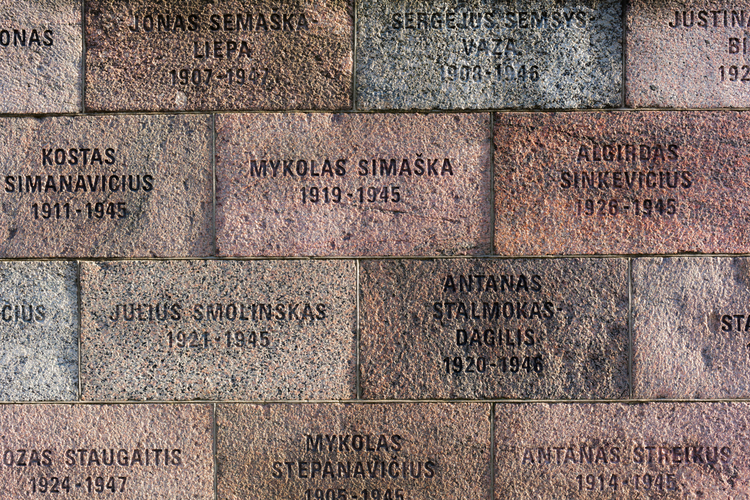 Wall of the K.G.B. Museum in Vilnius, Lithuania, with the names of victims who died in the building.

VILNIUS, LITHUANIA—Pope Francis ends his official visit to Vilnius on Sunday evening at the Museum of Occupations and Freedom Fights, housed in the former headquarters of the K.G.B. Many of the cells appear as the Soviet occupiers left them; others have displays, including photos of those who suffered here. Over 1,000 people were killed at this location.

The upper floors hold documentation about the atrocities of the Soviet regime. The lower floor includes the cells where prisoners were held, including one set up for brainwashing, where prisoners had to stand on a small platform surrounded by cold water some inches deep.

Among the photos on display is one of Sigitas Tamkevičius, S.J., who was at times summoned here for interrogation and was a very important figure in the Lithuanian resistance to Soviet occupation. In 1983 he was arrested and brought here for trial, after which he served 10 years in prison and in exile in Siberia. With the demise of the Soviet Union he became auxiliary bishop of Kaunas in 1991 and the archbishop of Kaunas in 1996.

A copy of the very first issue was typed on cloth, which was sewn into a woman’s dress and thus smuggled out.

Archbishop Tamkevičius will be one of those who accompanies Pope Francis on this final stop in Lithuania. Born in a small town in 1938, he attended the seminary in Kaunas and was ordained a priest in 1962. He served as a parish priest first in Simnas and later as a pastor in Kybertai from 1975 to 1983. In 1968 he entered the Society of Jesus, which existed in secret because religious orders had been banned. He also became involved in protesting the anti-religious actions of the civil government. In 1978, with four other priests, he formed the Catholic Committee for the Defense of the Rights of Believers.

Prior to forming this committee, however, he had begun to document government activities that sought to destroy the Catholic Church. To spread the word of this persecution, he brought together a group of believers who began to publish documentation in a periodical called The Chronicle of the Catholic Church in Lithuania (Kronika). They met to decide on subjects for articles, wrote and edited them, typed them up and eventually reproduced them on very primitive equipment; they also photographed them to smuggle out to the West.

For the very first issue, they gathered the material and presented it to the exiled Bishop Vincentas Sladkevičius, who liked the idea and suggested the name “Chronicle.” Father Tamkevičius also presented it to the Jesuit provincial, Jonas Danyla, S.J., who also approved the project. The first issue was dated March 19, 1972, the feast of St. Joseph, which was chosen to honor Father Juozas Zdebskis, who was imprisoned at the time and was later tortured by the K.G.B. and later still probably killed by them. A copy of the very first issue was typed on cloth, which was sewn into a woman’s dress and thus smuggled out.

The work of The Chronicle brought together a highly dedicated group of faithful Catholics who wanted to keep their church alive during the time of persecution.

Gathering information was not easy since many preferred not to have their stories told lest they attract official attention. Some protested that everybody already knew what the Soviet authorities did. But, as Archbishop Tamkevičius explains: “[w]e wanted to present as many facts of brave opposition as possible so that other people could learn from them. Such articles in the Kronika especially helped people to overcome fear and decide to oppose evil.”

The work of The Chronicle brought together a highly dedicated group of faithful Catholics who wanted to keep their church alive during the time of persecution. The group included many religious sisters of various orders. The work involved secret meetings, hiding places, nights huddled over typewriters and finding curriers who would take photographs or film to the West where it was printed and became available to Radio Liberty or Vatican Radio.

Of those who worked on the Kronika, 11 lay persons, four sisters and two priests were arrested over time.

Of those who worked on the Kronika, 11 lay persons, four sisters and two priests were arrested over time. Father Tamkevičius himself was forbidden to do priestly ministry for a while after he protested Soviet restrictions on the Kaunas seminary; he was assigned to work in a factory and at land reclamation. The arrests and imprisonments, though, did not stop those determined to spread the truth. Father Tamkevičius writes about the trial of some of his collaborators in 1974: “Perhaps the communist party and K.G.B. officers tried by this show trial to intimidate those who dared to speak the truth, but the effect was the opposite—repressions fostered the determination to fight.”

The typewriters mentioned above represented a particular challenge, since the editors could not let the authorities who might capture a copy trace the fingerprint of the typewriter that was used. Typewriters in Lithuania were so designed that the keys that strike the paper could be removed from the keyboard so that one could switch from the Latin alphabet, which Lithuanians used, to the Cyrillic, the standard in Russia. Father Tamkevičius became adept at removing the tips of some of the keys from a number of keyboards and mixing them up and re-soldering them so that the bumps and scratches on the many keys became intermixed and the keyboards untraceable.

In 1983, Father Tamkevičius was arrested and charged with anti-Soviet propaganda and agitation. He was tried and sentenced to 10 years in prison and exile in Siberia. The work of the Kronika went on, though. The K.G.B. was suspicious of Father Tamkevičius, but as the publication kept appearing, they did not know for sure that they had caught the editor. The new editor was also a Jesuit, Jonas Boruta.

Father Boruta was also a priest, though a secret one. He was a physicist who began studies in the underground seminary in 1973. In 1982 he was ordained in a small church with only the ordaining bishop and two other Jesuits present. In 1983, Father Tamkevičius had to do some traveling and asked Father Boruta to stand in for him at his church. Before leaving, he wrote on a sheet of paper, “If necessary, take care of the Kronika.” Father Boruta wrote back: “O.K. if necessary I’ll help.” He really did not feel ready to become an editor. But after Father Tamkevičius’s arrest and sentence later that year, he did indeed become an editor and served for the remaining life of the Kronika, which lasted until March 19, 1989, after which it was needed no more. (Jonas Boruta was made bishop of Telšiai in 2002.)

When Pope Francis visits the prison on Sunday, he will have a companion who knows the place well, who has experienced its horror and has felt its pain. He also visits with the spirits of those many others who suffered and died there in defense of freedom and truth. Archbishop Tamkevičius will make history real, faith concrete and truth alive. Pope Francis could have no better companion on this journey.

(The story of the Kronika, with essays by Archbishop Tamkevičius and Bishop Boruta, is told in The Church, the Kronika and the KGB Web, by Vidas Spengla, Kataliku Akademija, Vilnius 2002.)

Before being used by the Soviet KGB it was the Gestapo torture headquarters used by the Nazis against the Lithuanian resistance. A section of the museum is dedicated to this...so many stories from that time I know of as my father and his fellow Catholic resistance fighters were tortured there. I remember all the deep scars on his hands. The full horror of the Soviet communist regime can only be appreciated if one is made aware of the fact that they simply continued to use Nazi facilities like this torture centre or Sachsenhausen concentration camp north of Berlin.