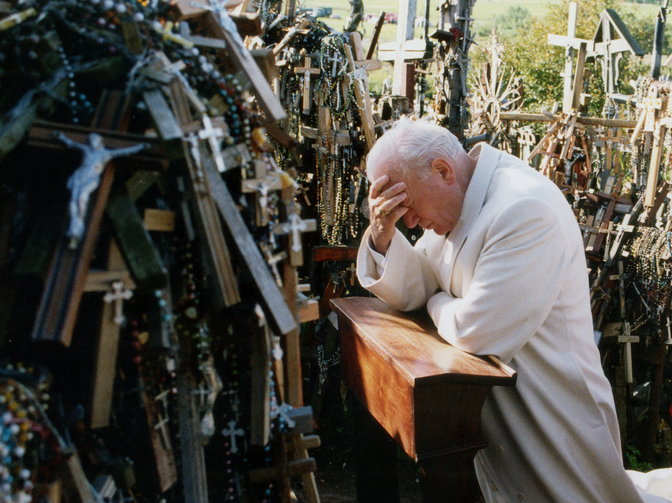 Pope John Paul II prays in 1993 at the Hill of Crosses in Siauliai, Lithuania. Pope Francis will make the same three-nation visit, stopping at a number of the same places as his saint-predecessor. (CNS photo/Arturo Mari, L'Osservatore Romano)

VILNIUS, LITHUANIA—A main street that cuts through the center of this city is lined with iron barricades; yellow, green and red national flags wave in the breeze from lampposts across the street from the yellow and white flags of the Vatican. The cathedral square bulges with tented platforms and huge projection screens. Signs posted throughout the city give instructions on when and where to see him. Pope Francis is coming to town, and the town is ready.

Francis is visiting the three Baltic States—Lithuania, Latvia and Estonia—to help mark their centennial of independence from czarist Russia. Though they are close neighbors and are often spoken of together, they have quite distinct histories. Their commonality includes the constant threat or actual domination by powerful neighbors. It includes a fierce desire for and readiness to fight for their independence. And it includes the “singing revolution” of the 1980s, when music became a weapon for independence, particularly with the Baltic Way, a human chain of two million people the stretched between Tallinn and Vilnius on Aug. 23, 1989.

Francis is visiting the three Baltic States—Lithuania, Latvia and Estonia—to help mark their centennial of independence from czarist Russia.

But the differences are real. Lithuania was for centuries politically connected with neighboring Poland. Latvia was often under the sway of Sweden and Germany to the west across the Baltic Sea and Russia to the east. Estonia was subject to influence from Russian to its east and Sweden to the west but also felt connected with Finland, north across the Gulf of Finland and actually visible from a church tower in Tallinn, the capital, on a clear day.

The religious picture of the three Baltic States is likewise very different, reflecting their unique histories. Of Lithuania’s population of 3.2 million, 2.6 million, or 80 percent, are Catholic. In Latvia, it is 21 percent of two million. In Estonia, it is a half percent of 1.3 million. (Note that the numbers are rounded off; for much more data see this article.)

A study published last March in The Guardian drew a picture of the loss of religion in Europe. It found that the Czech Republic is the least religious country among 16- to 29-year-olds; Estonia, Sweden and the Netherlands are not far behind. The most religious country for this age group is Poland, followed by Lithuania.

Pope Francis’ itinerary matches these differences. He flies to Vilnius on Saturday, Sept. 22, arriving at 11:30 a.m., and spends the day there meeting with government officials and various groups. On Sunday he drives to Kaunas, Lithuania’s second city, and returns to Vilnius at 4 p.m. for prayer and other visits. On Monday he flies to Riga, the capital of Latvia, for meetings and prayer and in the afternoon visits the shrine at Aglona, where he celebrates Mass. He then returns to Vilnius for the night.

The church that Francis will find in Lithuania is still very strong, even among young people.

The numbers are not the whole story. The church that Francis will find in Lithuania is still very strong, even among young people. Algimantas Gudaitis, S.J., teaches and is a spiritual director at Vilnius Jesuit High School, and he talked to America about a “small crowd of young people in religious prayer groups” and noted that “young people are very active.” The challenge, he says, is to help young people to find their place in the church.

Father Gudaitis also notes that it is a big deal that Pope Francis is visiting here. There has been a bit of resistance from non-churchgoers (“why should our tax euros go to support this visit?”), but for the most part, the reaction is very positive. It is different from the enthusiasm when St. John Paul II visited in 1993, since he had been instrumental in the end of the Soviet Union and of the communist domination of Eastern Europe. But enthusiasm is still great for Francis. Father Gudaitis notes that Francis will not meet with the bishops as a group but will meet with orphans and adoptive parents and with prisoners.

(Father Gudaitis, along with his twin brother and fellow Jesuit, Aldonis, was among the demonstrators at the radio/TV tower in Vilnius on Jan. 13, 1991, when the Soviet military attacked them, killing 13 and injuring some 140 others. The Soviet Union soon gave up trying to assert sovereignty over Lithuania and other states.)

Antanas Saulaitis, S.J.*, also sees that people “are excited about the pope.” There may be some opposed to him, but opposition is not organized as it is in other places. Right after the end of the Soviet era, it was difficult to talk about “faith and justice,” as “justice” was seen pointing to communism, but that is no more. Francis’ push for justice is considered quite acceptable.

Father Saulaitis, who was born in Lithuania but whose family migrated to Germany and to the United States after World War II, also sees the challenges to the church. Secularization is here. Many people in their 50s had no experience of church when they were young; their parents’ jobs depended on their not going to church. Where 20 years ago it was your grandma who went to church, now there are “no more pious grandmothers, or only a few.” People are searching on their own. The “church model is old, outreach is weak.”

But outreach is still happening. Father Saulaitis tells of a very committed woman who was leading a group of 15 young people. “Are you believers?” she asked them. Three of them said they were believers. Seven reported, “I believe in science.” That is what they hear at home or in state schools.

Father Gudaitis has also worked at a Jesuit spiritual center in Riga, Latvia, a recent initiative. He reports that in Riga, though the numbers are fewer, there are still young people very active in spirituality. How to attract or influence others? Protestant groups have catechetical programs for adults, and there are groups who come to the Catholic Alpha programs. Many parishes do attract young adults.

A Shrine for the Year of Mercy
Paul Jaskunas

In Estonia, the number of Catholics is very small. Those who work there do great work, but it is difficult to know what Pope Francis will find. But, yes, there is faith in Estonia, living faith.

This brief, busy visit by Pope Francis is very important to the church in the Baltic States. They are different, to be sure, and the pope’s schedule acknowledges that. But he comes to celebrate a centennial of independence, to acknowledge a history filled with persecution and hostility, and a new freedom since 1990 to believe and to celebrate the Gospel of Jesus. The people are happy to welcome him here.

*Father Saulaitis was the last provincial superior of the Lithuanian Jesuits in exile, whose headquarters was in Chicago. He returned to Lithuania and later became provincial there. He appears on a recent Lithuanian postage stamp honoring 100 Lithuanians who have most contributed to uniting Lithuanians throughout the world.

Many contributors in the field have often asked these kinds of questions. For instance, Nellie Mayshak, the president and the CEO of the Canaf Consulting Associates, has a deep interest in getting the right answers for the previous questions.