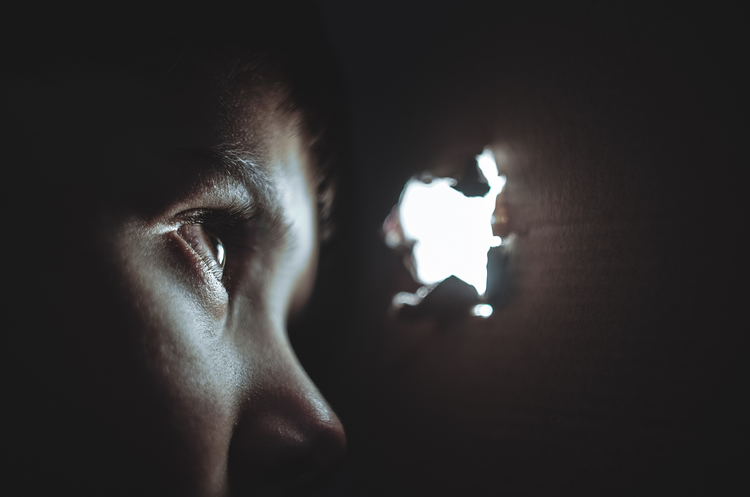 Photo by Dmitry Ratushny on Unsplash

Novels that matter reveal us to ourselves. They identify something that most of us have experienced but perhaps have never been able to put into words. In her newest novel, The Gunners, Rebecca Kauffman does a wonderful job of describing what Holly Golightly, in Truman Capote’s Breakfast at Tiffany’s, once called “the mean reds.”

As a child, one of Kauffman’s characters watches an eclipse of the sun with his classmates in the schoolyard. It is a moment of pure joy:

What a universe. There was so much to see! So much to feel!

And yet, if there was one thing Mikey knew of feelings…There was always that other feeling, crouched and waiting nearby in the shadows, even at a moment like this, even when he was on the brink of the most beautiful thing he would ever see in his life. It was the low tide. The sacred, empty void after the birds had taken flight. The tangled thing that tugged on Mikey, kept him sewn up inside himself, made happiness hard. Mikey didn’t yet have words for this feeling, but already at this young age, he understood that it would never leave him entirely—nature had put it in his heart, and there it would always remain, even when he thought he was in the clear, even when he thought he had left it behind.

Mikey had asked his father about this feeling once, years earlier, when he was very small and before he had learned that it was foolish to talk plainly about feelings. Mikey had said, “I have a bad, sad feeling in me sometimes.” His father said, “Me, too.” And knowing that his father shared this had been such a great comfort to Mikey that over time he began to cherish that shadowy feeling, which proved to be as sure as the tides, as persistent and reliable as a dear friend, as real and as much a part of his universe as the sun.

Mikey’s dark feeling, “that sacred, empty void,” “the tangled thing that tugged” on him, might help us to understand something of what we mean when we speak of sin.

Seeing our lives as a struggle with sadness rather than sin, we do not feel much of a need for a savior.

Our contemporary culture does not think much of sin. You can take that sentence in two ways. We don’t often think about sin, and we also don’t find sin to be all that useful of a notion for explaining our lives. What we see when we look at our lives is a lot of sadness. Yet somehow, as pervasive as sorrow is in our lives, we also have a sense that it does not belong, that it is not right, that life was not meant to be like this.

Seeing our lives as a struggle with sadness rather than sin, we do not feel much of a need for a savior. We do not think of ourselves as alienated from something deep and vital in our lives. So we also do not think much of God. Again, that means that we do not speak much of God, really, and also that the idea of God does not seem to say all that much about our sadness. There may be an all-powerful being beyond our world. There may not. What of it?

God is the small burst of joy that suddenly reveals how dark our worlds really are.

Perhaps we would do better, be more faithful to the Gospel message if we called the incipient joy that once in a while breaks through and around our clouds God. There is a small, awesome line in one of the Eucharistic Prayers for Children that perfectly captures what the church and her proclamation of a savior is all about. It links Jesus with happiness:

He came to show us
how we can love you, Father,
by loving one another.
He came to take away sin,
which keeps us from being friends,
and hate, which makes us all unhappy.

Sin is not something that we see or name or understand until we have experienced something of God, something of salvation. Think of God as unexpected, unexplainable joy. We experience God when we recognize that life does not have to be sad, that life should not be sad, and that something is wrong if our life is sad.

One might suggest that we live in a world of shadows, into which the sun ever so often breaks through. One could say that God is the small burst of joy and contentment that suddenly reveals how dark our worlds really are. St. Augustine put it ever so well when he said, “You touched me, and I burned for your peace.”

We experience God when we recognize that life does not have to be sad. ​

Christ, given to us in the Gospel of Mark, has set his face like flint. This is the Gospel in which Jesus displays so many emotions, many of them dark and turbulent. Depending upon how literal your English translation of the Greek is, Christ responds with “anger” to the leper who says to him, “If you will, you can cure me” (Mk 4:1). When the crowd watches, as a man with a withered hand approaches him on the Sabbath, Christ looks at the throng with “anger and compassionate sorrow” (Mk 3:5). He “sighs” at the cure of the deaf and dumb man, and when the Pharisees ask for a sign, he refuses them, though he literally “breathes anger” and “spits threats” at them (Mk 1:43).

If you want to follow Christ, you must first accept a cross
Michael Simone

How do you picture belief and unbelief?
Terrance Klein

Scholars such as Ernst Lohmeyer and Hans Urs von Balthasar have suggested that for St. Mark this is the lot of God’s Holy One, who has entered our land of shadows. The very joy, who created the world, in becoming a man and entering our world, finds himself suffocating in sadness. He chafes at the limitations of sin. He is constrained by the bonds that hold the rest of us. And he is resolutely determined to hunt down this sadness, this darkness, and to defeat it in his own self, with his own death.

Like so many of us, Peter finds his master all too morbid. He receives a full blast of Christ’s resolute and raw reception of sin.

At this he turned around and, looking at his disciples,
rebuked Peter and said, “Get behind me, Satan.
You are thinking not as God does, but as human beings do” (Mk 8: 33).

To accept Christ as savior, to join ourselves to him, is to embrace his flint-like stance toward sin or, if you prefer, toward the dark sorrows that envelope human life, that darken our lives.

Whoever wishes to come after me must deny himself,
take up his cross, and follow me.
For whoever wishes to save his life will lose it,
but whoever loses his life for my sake
and that of the gospel will save it (Mk 8:34-35).

Christ walks into sadness because he knows that in him alone sin’s sorrow will come to shame. The sun has never feared the clouds. That is why we have the strength to walk into our cloud bank of sorrows. We are not making peace with sadness. With Christ as our captain, we intend to destroy it. In Christ Jesus, we have had a taste of real, shining joy. We will live no longer in shadows and sorrow.

I have a totally different take on the following passage:

His father said, “Me, too.” And knowing that his father shared this had been such a great comfort to Mikey that over time he began to cherish that shadowy feeling, which proved to be as sure as the tides, as persistent and reliable as a dear friend, as real and as much a part of his universe as the sun.

I have never conceived of sadness as evil or something that wasn't a natural and necessary part of human life. For me, the passage above shows Mikey embracing sadness as a natural part of life that needn't be avoided or feared but rather accepted. Rather than equating it with sin, I think that sadness is simply a reminder to us that human life isn't supposed to be one continuous high but as Ecclesiastes reminds us, "there is a time to be joyful and a time to be sad." We just need to make certain that those feelings are appropriate to life situations.

Perhaps because I lived through the 60's and saw how some people thought it
was a new age and all sorrow and tears would soon disappear that I am wary of
those who misunderstood sadness.

Human wickedness and human indifference brings about a justified sadness
in the Poor and the Homeless, those jailed in sub-human conditions, the migrants
who have receive no acceptance, in those who have no hope.

There are Good Fridays and Bad Fridays and Easter Resurrections and Easter deaths
and we are told to endure it all and to continue to pray when nothing makes any sense
and so we do, and yes, some are sadder than others and their lives are lives of simple truth -
where is our Saviour, the Saviour that you promised Fr. Terrance, the one who would bring
us joy in a world of constant agony - will you witness His salvation to those of us the world
has not time for and that the Church has for so long ignored ?

Fr Klein could benefit from a few units of CPE.