NY Catholic dioceses to be subpoenaed in sex abuse probe 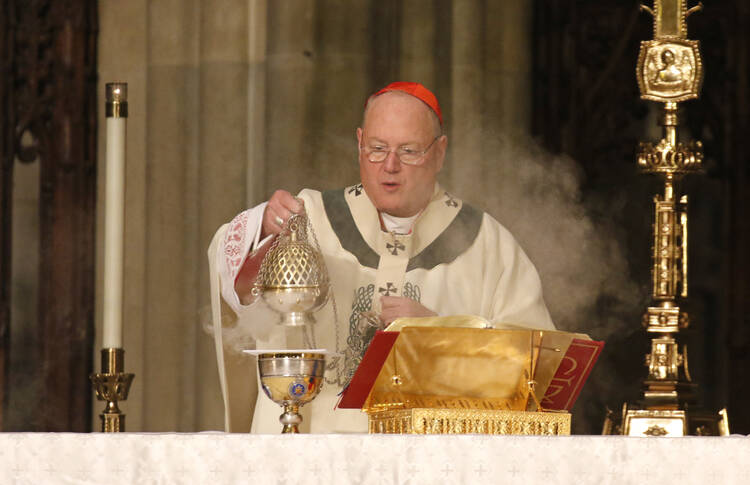 New York Attorney General Barbara Underwood has subpoenaed all eight Roman Catholic dioceses in the state as part of her office's investigation into the church's handling of sex abuse allegations. A law enforcement source familiar with the investigation but not authorized to speak publicly told The Associated Press the subpoenas went out Sept. 6.

The subpoenas seek documents relating to sexual abuse allegations, financial payments to possible victims or the findings from internal church investigations, according to The Associated Press. Ms. Underwood's office is pursuing a civil investigation into how church leaders responded to reports of abuse.

A spokesperson for the Archdiocese of New York suggested the archdiocese was ready to cooperate in the investigation.

“It is not a surprise to us that the attorney general would look to begin a civil investigation, and she will find the Archdiocese of New York, and the other seven dioceses in the state, ready and eager to work together with her in the investigation," said Joseph Zwilling, director of communications for the Archdiocese of New York via email to America.

“Since 2002, the archdiocese has shared with its 10 district attorneys all information they have sought concerning allegations of sexual abuse of minors and has established excellent working relationships with each of them,” Mr. Zwilling said. “Not only do we provide any information they seek, they also notify us as well when they learn of an allegation of abuse, so that, even if they cannot bring criminal charges, we might investigate and remove from ministry any cleric who has a credible and substantiated allegation of abuse.”

He added, “We look forward to receiving the subpoena and working with the attorney general.”

The New York attorney general's office said it had taken a cue from the state of Pennsylvania and its probe for records that resulted in an Aug. 14 grand jury report detailing claims of sexual abuse of minors by clergy going back 70 years. Though the report identified more than 1,000 sex abuse claims, in Pennsylvania, only two cases resulted in prosecutions because the statute of limitations had expired in the majority of cases.

“The Pennsylvania grand jury report shined a light on incredibly disturbing and depraved acts by Catholic clergy, assisted by a culture of secrecy and cover-ups in the dioceses. Victims in New York deserve to be heard as well -- and we are going to do everything in our power to bring them the justice they deserve,” said Ms. Underwood.

She added that New York may face a similar scenario to Pennsylvania when it comes to prosecuting any cases since “many cases of abuse may not be prosecutable given New York's statutes of limitations.”

The Diocese of Albany in a statement released on Sept. 6 said it had contacted the Albany District Attorney’s office, inviting its officials “to review our records and look at how sexual abuse cases have been handled historically in the Roman Catholic Diocese of Albany, to what extent survivors were heard and believed, what processes were followed, and what consequences resulted.” The letter was addressed to parishioners.

In an email to CNS, Albany’s Director of Communications Mary DeTurris Poust confirmed that the diocese had received a subpoena, adding that Bishop Edward B. Scharfenberger said, “We have to do what is right, even if it is not easy.”

“As Bishop Scharfenberger stated in his letter to the people of our diocese, when he made the decision to ask Albany District Attorney David Soares to review our records, we believe that only by shining a light on whatever might be hidden can we bring about true healing for survivors and for our church,” she said in the email.

In Buffalo, where the diocese has been dealing with fallout following a series of television news reports that said Bishop Richard J. Malone did not remove two priests from ministry after receiving abuse allegations, George Richert, director of communications, said the office would work with state officials.

“Our diocese will cooperate with any investigation initiated by the New York State Attorney General or District Attorney,” he said in an email to CNS.

Under New York law, only district attorneys can refer evidence to grand juries to investigate criminal complaints and recommend prosecution, as long as the potential charges meet the statute of limitations, according to the New York County Lawyers Association website.

A day before New York announced its probe, the Attorney General of Nebraska asked the state’s three dioceses for sex abuse records going back 40 years.

With AP and CNS reporting
This article was updated on Sept. 7.

Every diocese will be subpoenaed. NY just makes more headlines. Every state will be required to investigate.

It will be interesting to see how much abuse occurred since 2002 or if they investigate other organizations.

I wonder what other organizations you have in mind that has this kind of serious problem?

Why do people think this issue isolated to the Catholic Church? 1.8 Million children were sexually abused in 2014 (https://www.americamagazine.org/faith/2018/08/21/plague-sexual-abuse-worse-you-think). Penn. Grand Jury identified 1000 victims over the past 70 years. Start doing the math... There's a lot of rot in our society overall, it's not just in the Catholic Church, but we get all the headlines.

Any organization that has frequent contact with children. Schools would be one.

They probably should go ahead with it, even though it's likely that the shredders in chancery offices all over the country have been working overtime since the Pennsylvania investigation results were released.

I sincerely (and insincerely) hope not. But even with documents missing out of those the Archdiocese has already made available with DA's you still have survivors, whistleblowers, and that is who DA's will call upon to get to the bottom of things.

Chances are your concerns, while justified (again I hope not), aren't founded. And if they are, time to chase those who have turned the temple into a den of iniquity out onto the streets.

At least this mess - and we're going to see more of the mess - isn't going to disconnect me from Jesus or God, who I have come to in the Catholic church for its apostolic beginnings. But if my priest is going to go on about the ills of contraception, homosexual activity, same sex marriage, the superiority of the Catholic church over other faiths (I'm sure all faiths pull this advertising spin), I'll return serve with the ills of the hierarchy and ask how publicly the Church will announce its changes rather than waiting for people to come through the door.

This is actually very good news. Yet, the movement should spread across the entire nation. There are 196 Catholic Dioceses in America. Open all of these to investigation
http://www.usccb.org/about/bishops-and-dioceses/index.cfm

Be sure to check Dolan's abuse coverup in Wisconsin!

The terrible wounds inflicted on the Catholic Church in America cannot begin to heal until and unless every single American cardinal resigns his post. They knew. They all knew. They are all complicit.

Maybe the old time American Cardinals should resign. I have a problem with Cardinals in that they are too political in both Church and Government. They all feel they should be Pope.

Bring it on! The Catholic Church is incapable of self-examination, as the lies of McCarrick's proteges and enablers show. Cardinals "Roomie" Farrell, "Zirwas Bribe" Wuerl and "night night baby" Tobin should be first in line to get the ax.

about time that USA followed the example of dozens of other nations around the world who commission national public governmental investigations of institutional abuse of children in both secular and religious institutions, and Catholic and non-Catholic religions. Enough with the states already, this is a NATIONAL problem! We need a National Commission of Inquiry with federal powers of subpoena.

Someone, please nail Dolan for his corruption in Wisconsin.

I honestly cannot believe that I’ve lived to see accountability moving to the forefront. There has been a seismic shift about these issues. Victims and survivors are being believed right & left. While it’s a very tough time, it feels positive to me. Many of us somehow made it... me, 49 years since the abuse. I have begun to take steps to establish a permanent Healing Center by, for and about clergy abuse survivors. We need our own place where people can gather for a day, a week, a month, a year, or even a lifetime. We need to study this crisis. I have had a funny little thought lately... I know deep down it’s all going to be okay, if we just ask ourselves all the time, “What would Love do”. All the answers are about Love. Isn’t the most fundamental teaching Jesus gave us encapsulated this: “Love one another as I have loved you.” Amen. Let’s move forward now toward healing. We’re all humans after all. No one gets outta here alive. Peace!