What we must learn to become fully human 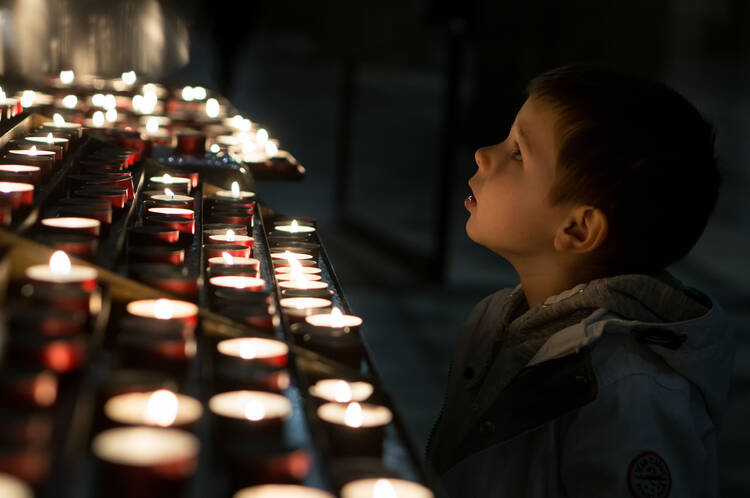 The rosary I usually pray on the move, as Coco Chanel (my Chihuahua) and I make our security sweep of the parish grounds and the neighborhood.

My personal prayer time in the church involves the use of two books—something inspirational that I am currently reading and the breviary—so I sit toward the front of church, where the light is good.

That puts me in front of the votive lights, which is something of a “blessed burden.” It is a burden because so many of those lights are lit, which can only mean that someone, bearing a weight much greater than my own, has come to church and left this lighted candle as a sign of a singular and sometimes desperate need. The lights remind me that I need to bring these anonymous intentions into my own prayer. Sharing the lives and cares of others is what it means to be parish and what it means to be a pastor.

So I walk through my rosary remembering someone who has an appointment with a cancer specialist and another who has been taken to a regional hospital for more acute care and someone else who has entered into hospice care. Some of those candles must be for them as well. But I suspect that one of the many grandparents in the parish who have become primary caregivers for their grandchildren might also have left a candle glowing.

Sadly, priests often appear too busy to listen to every person who is lonely or feeling low. I speak with some who are troubled in marriage, but I am sure it is only a small portion of those who are struggling. Perhaps one of those candles was lit by a spouse seeking God’s help. Another might have been lit by a business owner or a farmer whose days in his chosen profession appear limited. They would be among the last to share those thoughts with anyone else, which only makes their worries more of a burden. But who, save God and those who light them, really knows why so many candles are burning?

Father John Behr, of Saint Vladimir, the Orthodox seminary in Yonkers, N.Y., wrote a beautiful essay, “Patristic Humanism: The Beginning of Christian Paideia.”Paideia is Greek for education or formation. He points out that early Christian writers in Asia Minor and Syria, like modern-day existentialists, presented being human as a project to be accomplished, not something already given.

To become a fully human being, we must learn to enter into dialogical love with God and with each other.

Here God deliberates, announces a project that is more open-ended. It will require the active responses of human beings. If God as Trinity is loving dialogue, then for a human being to become a fully human being, we must learn to enter into dialogical love with God and with each other.

Father Behr sees St. John’s Gospel to be a deliberate, direct response to the creation story. The first hint of that lies in the opening lines of the two books. Genesis begins with the story of creation: “In the beginning God created.” St. John opens his Gospel by echoing and elaborating upon Genesis: “In the beginning was the Word, and the Word was with God, and the Word was God.”

In Jesus a human being fully realizes himself by giving himself away in love.

John gives us a Christ who was there from the beginning of creation and who in his mission among us brings creation to its fulfillment because he brings our humanity to completion. In Jesus, the man who is also Son of God, humanity finally offers a complete response of loving submission to the outpouring of the Father’s love. In the course of his 33 years, Jesus fashions the same identity toward the Father that he has always possessed in the Trinity as the Son of God.

The most profound reading of our Lord’s last words in this Gospel—“It is finished”—refer to more than the end of Christ’s mission or even to the closing of his life. In handing himself over to his Father, the Son brings creation itself to completion, for in Jesus a human being fully realizes himself by giving himself away in love. The sun and stars come into being with a simple command. What it means to be a human takes time and effort, requires the work of the Holy Spirit, demands from all of us, as it did from the Son, the work of a lifetime.

Commandments have their role, but if they do not lead us to look inside ourselves, they are not meeting their task.

We do not come into the world ready to give ourselves away, yet that is the heart of morality for a Christian. Commandments and norms have their role, but if they do not lead us to look inside ourselves, they are not meeting their task.

Hear me, all of you, and understand.  Nothing that enters one from outside can defile that person; but the things that come out from within are what defile (Mk 7:14-15).

Sadly, many of those who still come to confession have a hard time seeing that the issue is one of surrender, which doesn’t mean that they have not learned how to do this. Some certainly have. Perhaps more people would come to confession if they asked themselves not about commandments but about what is the center of their life. Where are they learning to yield, and where are they are afraid to surrender?

Why do some Catholics stay?
Terrance Klein

Father Behr points out that pre-Christian, ancient Greeks linked learning to suffering—mathein to pathein—we learn from what we experience. So someone like St. Irenaeus could insist that it is God’s loving design that “the human race comes to learn of its own weakness, but also simultaneously comes to know the greatness of God manifest in its own weakness, transforming the mortal to immortality, and the corruptible to incorruption.”

When I look at all those votive lights, I cannot help but think of the fear and suffering they speak. Still, some soul is responding to his or her enveloping darkness by turning to God, by lighting a candle. They have arrived at some height of their own unique Calvary. Who can say how much more they will have to climb?

Irenaeus ends his writing with a stark warning. If we cannot learn to imitate Our Lord’s dialogue of love, if we cannot surrender, “we kill the human being in us.” For that is how we were fashioned by God. Not as something that he can command but as someone whom he everlastingly desires: one who can surrender in love, one who can surrender to love. And this we learn to do by what we suffer.

Thank you Fr Klein for your beautiful and factual article. I appreciate you incorporating Patristics into your reflections while weaving our modern day ethos into them. My husband and I love our Catholic Faith and because of the Vigano scandal, and consequent apoplexia from all sides, we started praying the Liturgy of the Hours last night. We hope to journey, grow and learn from our suffering as a married gay couple, focus on accepting our lot while being fully alive and functional for God. May it be so

Now you can enjoy all postal services of USPS on Liteblue.

Beautifully written. We need to learn to help each other light and keep our candles lit in the midst of what feels like ferocious, howling winds, drawing close to one another as human shields against them. I too have a chihuahua, named Alice, a white, fluffy princess who is definitely in charge of my “pack” of 4 (2 Corgis and a poodle- chihuahua cross, a poo-chi) the only female.