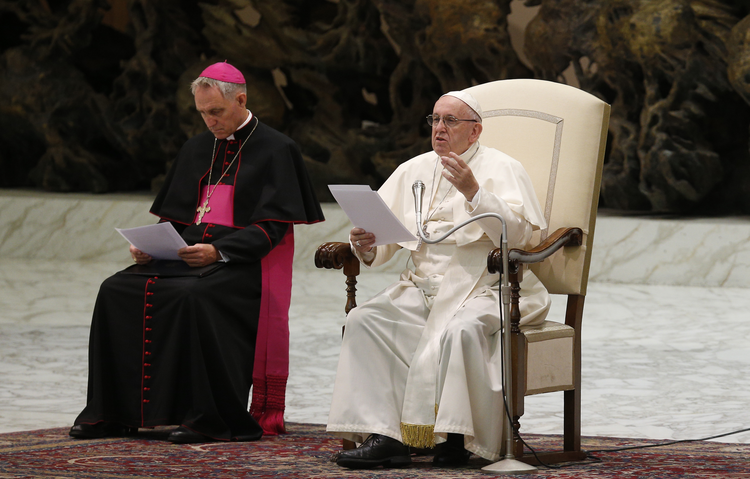 VATICAN CITY (CNS) -- Like the ancient Israelites, Christians today also can fall into the temptation of creating their own idols when difficulties and uncertainties arise, Pope Francis said.

"To escape precariousness human nature looks for a 'do-it-yourself' religion. If God does not show himself, we create a tailor-made god," the pope said Aug. 8 during his weekly general audience.

"To escape precariousness human nature looks for a 'do-it-yourself' religion. If God does not show himself, we create a tailor-made god."

Continuing his series of audience talks about the Ten Commandments, Pope Francis said he wanted to return to the theme of last week's talk on idolatry because "it is very important to know this."

He reflected on the reading from the book of Exodus in which the Israelites ask Aaron to build a golden calf to worship while Moses was on the mountain receiving the commandments.

Moses' absence, Pope Francis explained, triggered insecurities and anxieties in the people, leading to the creation of the idol that embodied "the desires that give the illusion of freedom but instead enslave."

Among those present for the audience was the musician Sting, who composed the music for "Giudizio Universale: Michelangelo and the Secrets of the Sistine Chapel."

"The calf had a double meaning in the ancient East. On one hand, it represented fruitfulness and abundance; on the other hand, energy and strength. But above all, it was made of gold because it is a symbol of wealth. Success, power and money. These are the temptations of all time," the pope said.

Idolatry, he continued, stems from the inability to trust in God. In the absence of this trust, Christians lack the strength to resist succumbing to doubt in times of uncertainty and precariousness.

Without God, he added, it "is easy to fall into idolatry and be content with meager reassurances."

Pope Francis said that God chose to save humanity through the weakness of Christ's suffering on the cross and "that by our own weaknesses, we can open ourselves to God's salvation."

"Our healing comes from the one who made himself poor, who accepted failure, who took away our precariousness to fill us with love and strength," the pope said. "He comes to reveal to us God's fatherhood. In Christ, our frailty is no longer a curse but a place of encounter with the father and source of strength from above."

the reason that we, the laity, are re-constructing our religion in a DIY fashion is because the established Church has let us down. This article seems to waffle between accepting the established religion as the best representative of God vs. turning to God on our own without the need of intermediaries. What is the argument here?

I believe you missed the point. You'll either let God finish your work, which is a part of His plan, or you want to finish it yourself because it is your own plan. As a laymen, you can work on re-reconstructing Church without any help from "the servants of the Church" both ways - as a part of God's plan not known to you or you can try to control everything without any trust in God.

Like the Israelites who worshipped a golden calf, being gay led me to make idols of men. I still have a friend who's gay. However, I have found that prayer, the Sacraments of Reconciliation and the Eucharist, serving others, and the love of my family have been good replacements for idolization. I also understand Pope Francis ' statement that the desire for success is a temptation. When I was a Special Education teacher, I felt a need to succeed to help my students become fully functional. However, in time I realized that all people, regardless of their needs, have worth.