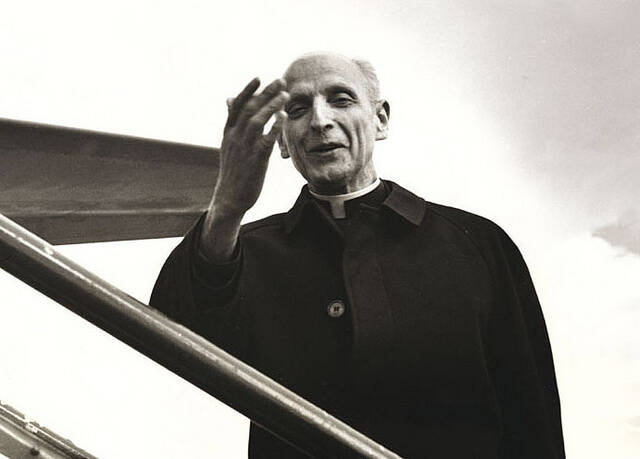 Jesuit Superior General Arturo Sosa, S.J., suggested that possibility today, announcing in Bilbao, Spain, that: “We have formally begun the process of beatification for Father Pedro Arrupe.” That is according to a story in InfoSJ, an information website of the Society of Jesus in Spain, first reported in English-language social media by Rhina Guidos of Catholic News Service.

“We are still at the beginning of the process, but Angelo de Donatis, the Cardinal Vicar of Rome has given the diocese of Rome approval to open the process of beatification,” Father Sosa announced at a meeting in Bilbao of Jesuits and lay associates involved with the International Association of Jesuit Universities, asking attendees at the meeting to pray for the cause and for the assistance of anyone who has useful information about religious devotion to Father Arrupe. He was “a man of truth rooted in Christ and dedicated to mission,” Father Sosa said, “whose greatest miracle is that we are here today.”

Arrupe was “a man of truth rooted in Christ and dedicated to mission,” Father Sosa said, “whose greatest miracle is that we are here today.”

The process by which the Catholic Church declares that someone is a saint is a multi-step one, concluding with canonization. Father Arrupe is already called a “Servant of God.” Beatification, the declaration by the Catholic Church that the person is “Blessed,” is the last step before canonization in the normal sequence. (Father Arrupe has not yet been publicly declared "Venerable" by the Vatican, a step before beatification.) This latest news means, in essence, that the Society of Jesus is committing its resources to moving ahead with the canonization process, such as interviewing people who knew Father Arrupe and soliciting proof of miracles that took place after prayers for his intercession. Historically such miracles have often been considered the result of the prayers of people asking for the saint's intercession.

The general postulator of the Society of Jesus, Father Pascual Cebollada, S.J., told Catholic News Service on July 13 that he is compiling the writings of Father Arrupe and soliciting testimony from eyewitnesses who can attest to Father Arrupe's holiness.

Father Arrupe served as superior general of the Society of Jesus from 1965 to 1983. During that time, he also served five consecutive three-year terms as president of the Union of Religious Superiors General (1967-82). Born in 1907, he entered the Jesuits in 1927. After the Jesuits were expelled from Spain in 1932, Father Arrupe studied in Belgium, the Netherlands and the United States as part of his Jesuit training for the priesthood. He was ordained in 1936 and moved to Japan in 1938 to work as a missionary.

Father Arrupe was the master of novices at the Jesuit novitiate in Hiroshima, Japan, on Aug. 6, 1945, when the United States dropped an atomic bomb, almost entirely destroying the city. Father Arrupe had been a medical student before entering the Jesuits, and he repurposed the novitiate into a makeshift hospital. He later called the atomic attack “a permanent experience outside of history, engraved on my memory.”

In 1958, Father Arrupe was appointed provincial superior of all the Jesuits in Japan.

On May 22, 1965, the 31st General Congregation of the Society of Jesus elected Arrupe the new Jesuit superior general, half a year before the close of the Second Vatican Council and in the midst of perhaps the most tumultuous period in the Catholic Church in several centuries. The Jesuits were the largest Catholic religious order in the world at the time.

In the decade following, many Jesuits embraced a more social-justice-oriented sense of the traditional Ignatian charism, particularly after the 32nd General Congregation in 1974-75, where the Jesuits passed (among other decrees) “Decree 4: Our Mission Today: The Service of Faith and the Promotion of Justice,” which has served as something of a blueprint for Jesuit apostolic activity in the four decades since. This new direction for the Jesuits led to occasional tensions with Pope Paul VI as well as increased friction with more traditional elements in the Catholic Church.

Arrupe suffered a stroke on Aug. 7, 1981, and soon after resigned as superior general, as his ability to speak quickly degenerated. Arrupe had recommended American Jesuit Vincent O’Keefe as his replacement, but Pope John Paul II instead appointed two other Jesuits, Paola Dezza and Giuseppe Pittau, to oversee the Society of Jesus until a new superior general could be elected—a move that was widely seen as unwarranted papal interference by rank and file Jesuits. At General Congregation 33 in September 1983, Peter-Hans Kolvenbach, S.J., was elected as the new superior general.

Arrupe's famous 1973 address to Jesuit educators and students, “Men for Others,” has become a central guiding document for Jesuit education today.

Arrupe died on Feb. 5, 1991. His influence on the Society of Jesus can be seen in the countless apostolates, residences and other Jesuit initiatives (as well as those embracing the Ignatian charism) that bear his name today, as well as in the many phrases and sayings attributed to him (not all correctly). His famous 1973 address to Jesuit educators and students, “Men for Others,” has become a central guiding document for Jesuit education today; in fact, the phrase “men for others” (usually more commonly rendered as “men and women for others”) was mentioned earlier this week by new U.S. Supreme Court nominee Brett Kavanaugh as he was discussing the importance of his religious formation in Jesuit schools.

According to Kenneth Woodward, former religion editor of Newsweek and author of Making Saints, Arrupe adopted the phrase "Men for Others" from the German theologian, Dietrich Bonhoeffer, who was executed by the Nazis in 1945. "In his letters from prison, Bonhoeffer wrestled with how Jesus should be understood in 'a world come of age'—a world, he thought, no longer had need of religion," Woodward told America. "In that context, he thought Jesus would be best understood as 'the man for others,' and that Christians should conduct themselves accordingly as people 'for others.'" Arrupe was introduced to Bonhoeffer's phrase, according to Woodward, by his vicar general, American Jesuit Fr. Vincent O’Keefe, who served as Arrupe’s second in command in Rome.

Perhaps equally as famous is Arrupe’s humble “Hands of God” speech, read aloud on his behalf at the 33rd General Congregation as Arrupe looked on, unable to speak. “More than ever I find myself in the hands of God. This is what I have wanted all my life from my youth,” Arrupe wrote. “But now there is a difference; the initiative is entirely with God. It is indeed a profound spiritual experience to know and feel myself so totally in God’s hands.”

In 2007, Georgetown University commemorated the centenary of the birth of Father Arrupe, S.J., through the commissioning of a documentary entitled Pedro Arrupe: His Life and Legacy.

Sainthood, in the age of social media, is more like an upvote or a friend listing. It doesn't mean as much as it used to but looks darn good and is something to have on the CV when you meet St. Peter. (Fortunately, I'll never have to worry over this.)

I met Pedro Arrupe, S.J. when I was a boy in Rome, he was not yet General.

He asked me what I wanted to be, and I said a member of the Society of Jesus.

Later, I met him at Gonzaga University, right after Mount Saint Helens Blew up -

To me he seemed very kind and thoughtful and prayerful.

fellow Jesuits, but he seemed, to me, to have the best of intentions.

If he is now a Saint or will get the official stamp of approval, I only ask that he

pray for all of us.

Pedro Arrupe - a man of prayer. Inspired countless others to take meaningful risks. Long live the memory of the General of Generals.