With Christ, you can liberate others from “unclean spirits.”

Mark uses the phrase “unclean spirits” more than any other biblical writer. In fact, the phrase is quite rare outside Mark’s Gospel. The phrase tells us something, therefore, about Mark’s religious imagination and the role he believed Jesus played in the salvation of humanity.

“They drove out many demons, and they anointed with oil many who were sick and cured them.” (Mk 6:13)

From what unclean spirits do you need to escape?

From what unclean spirits can you liberate someone else?

The terms clean and unclean suggest a ritual outlook. People, places and things that were clean could host or safely encounter the divine presence. The inner sanctuary of the Temple was the ultimate example of clean; it was so pure that the Spirit dwelt there perpetually. People who followed the Torah’s instructions were likewise clean and could approach the divine presence in the Temple or be filled with the Spirit themselves. All Israel—its people, cities, villages and land—was likewise clean when Israel stayed loyal to the covenant (Lv 26:34; 2 Chr 36:21; Ez 7:23, 9:9). By contrast, the desert was the ultimate “unclean” place, the haunt of evil spirits and wild animals.

Many in Jesus’ day feared that evil spirits had begun to creep into Israel and take possession of many (e.g., Luke 11:24). The possible reasons for this included corruption of the Temple and its priests, increased sinfulness among ordinary Israelites, the presence of pagan troops on Israelite soil or the lack of a Davidic king. It is not clear whether people thought they had became targets of unclean spirits because of their sins or whether it was simply their own misfortune, but the result was the same: physical and mental illness, permanent disabilities and exclusion from community life. Whatever the causes, in Mark’s mind the presence of so many unclean spirits suggested a diminishment of God’s presence in Israel.

An essential role of Jesus’ rescue mission was the eradication of unclean spirits and a restoration of God’s active presence. In this Sunday’s Gospel, Jesus sends out the apostles to take on that mission themselves. Their traveling gear, including a staff and sandals, resembled that of the Israelites on the night of their liberation from Egypt and foreshadowed the new liberation God had planned. Their simple living on the road allowed them to give away their services free, which symbolized God’s gratuitous love.

In Mark’s mind, the apostles’ message of repentance was linked to their ministry of deliverance. Unclean spirits manifested themselves not only as illnesses of body and mind but also as compulsive vices like cruelty, greed or pride. These unclean things can distort and even completely hinder encounters with God’s presence. The apostles’ message included a call to repentance as a way of driving away such obstructive spiritual forces.

Christ sends out his disciples today on the very same mission. We recognize unclean spirits today not through the illnesses they cause but through the minds they enrapture. Individuals, communities, even whole nations can fall prey to systems of thought that obscure God’s love or subvert the means to imitate it. Suicide, addiction, ethical confusion and a general sense of hopelessness are just a few of the signs that unclean spirits prowl our world. Through acts of mercy and love, Christ’s disciples restore God’s active presence and liberate their brothers and sisters from the unclean things that keep them bound.

This article also appeared in print, under the headline “A Place for God,” in the July 9, 2018, issue. 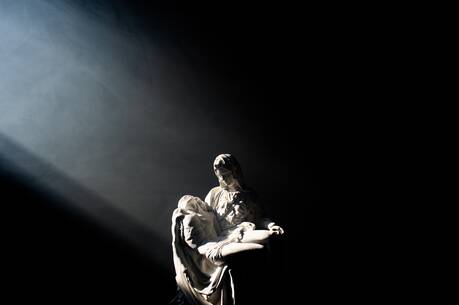