What are ‘canonical penalties’ and how should they be handed down? 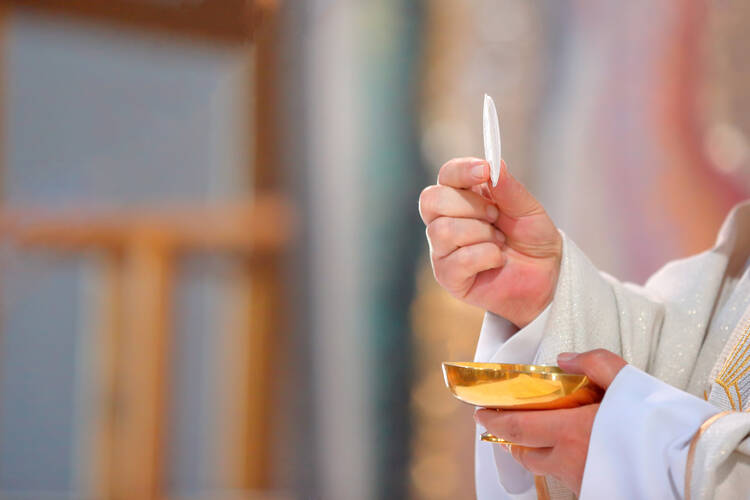 The U.S. bishops, meeting as a body this week in Florida for the U.S.C.C.B.’s annual spring meeting, are debating how they might use their political clout to influence a more humane treatment of the migrants and refugees who travel to our border.

The priority is preserving the “right to life,” the U.S.C.C.B. president, Cardinal Daniel DiNardo, said in a statement. “Our government has the discretion in our laws to ensure that young children are not separated from their parents and exposed to irreparable harm and trauma. Families are the foundational element of our society and they must be able to stay together.”

At the meeting, several church leaders urged immediate steps for accountability. Cardinal Joseph Tobin of Newark, N.J., proposed that bishops visit the border to inspect detention facilities where children are held, “as a sign of our pastoral concern and protest against the hardening of the American heart,” Religion News Service reported.

It is rare for penalties to be discussed in relation to a subject other than abortion.

Bishop Edward Weisenburger of Tucson, Ariz., raised the tougher question of implementing canonical penalties—censures or punishments imposed under church law—for Catholics directly involved in the separation of children from their families at the border.

Examples of canonical penalties range from the temporary withholding of Holy Communion to excommunication.

“Canonical penalties are there in place to heal, and therefore, for the salvation of these people’s souls. Maybe it’s time for us to look at canonical penalties,” Weisenburger said in his remarks.

Should politicians be refused communion?
The Rev. John P. Beal

During the 2004 presidential campaign, a national debate arose on whether or not John Kerry, a Catholic and then the Democratic presidential nominee, should be barred from receiving Communion because of his pro-choice views. Archbishop Raymond L. Burke of St. Louis told reporters at the time that he would give Kerry only a blessing if he came forward for Communion.

Some observers noted the significance of a similar discussion occuring on a subject other than abortion.

“It’s hard to overstate how significant it is for a Catholic bishop to even raise this possibility outside of the context of abortion,” John Gehring, Catholic program director at Faith in Public Life, wrote on Twitter.

While it may be the most recent prominent case of canonical faculties being debated by the U.S. bishops, it is not the first time. In the 1960s, Archbishop Joseph Rummel of New Orleans, with support of the Holy See, excommunicated political leaders who opposed his plans to desegregate Catholic schools in the area.

Writing in America in 2004, the Rev. John P. Beal explained the relevant canons in the church’s law:

The basic principle concerning admission of Catholics to holy Communion is clear: “Any baptized person not prohibited by law can and must be admitted to holy Communion” (Canon 912). Exceptions to this norm are to be interpreted strictly, i.e., by giving them the narrowest construal consistent with their literal meaning (Canon 18). The Code of Canon Law does contain two exceptions to this principle...Canon 916 addresses those who are conscious of having committed grave sin and warns such individuals that they are not to approach holy Communion unless they have first been reconciled to God and the church through sacramental confession. Since sin involves not only an external violation of a moral norm but also internal advertence and consent, the law normally leaves the decision about approaching holy Communion to the informed conscience of the individual. Canon 915, on the other hand, is addressed to ministers of holy Communion and stipulates, “Those who have been excommunicated or interdicted after the imposition or declaration of the penalty and others obstinately persisting in manifest grave sin are not to be admitted to holy Communion.”

In 2004, drawing from an interview with Sister Sharon Euart, a canon lawyer, Catholic News Service reported:

the key issue in refusing Communion is whether the individual is under a formal ecclesiastical penalty. For this to be the case, the local bishop should have discussed his objections to the person’s actions with him or her, made an effort to understand the person’s thinking and instructed him or her on where the bishop saw errors or misunderstanding, she said. The bishop would explain that changes in the person’s behavior are expected and what penalty might result if changes are not made. The bishop would then have to inform the individual in writing that a sanction was being imposed...

While Bishop Weisenburger insisted that the canonical penalties are there “for the salvation of these people’s souls,” there is a fear that the imposition of penalties could bring the sacraments into partisan politics.

“I am not in favor of weaponizing the Eucharist for politicians acting against church teaching,” Natalia Imperatori, an associate professor of religious studies at Manhattan College, wrote on Twitter. “If [Blessed Oscar] Romero could give communion to torturers and murderers, the US bishops can find other ways to make their point.”

Should politicians be refused communion?
The Rev. John P. Beal

In his 2004 America article, Father Beal wrote, “Zeal to protect the Eucharist from profanation by sinners can unwittingly lead to an even greater profanation by transforming the eucharistic celebration into a continuation of politics by liturgical means.”

In “Evangelium Vitae,”St. John Paul II reminds Christians of their apostolic duty “to obey legitimately constituted public authorities,” but also warns that “we must obey God rather than men” (No. 73). There is a “grave and clear obligation to oppose” laws that go against the church’s teachings on human life, he states.

Regardless of whether any local bishops will choose to impose canonical penalties on those cooperating with the separation of migrant families at the border, it is clear that the bishops are considering immigration issues as matters of grave importance.

When I first heard that one bishop had suggested canonical penalties for participation in the destruction of family units, I was overjoyed. I figured at least one bishop had some moral values!

But on second thought, I realized how mistaken my initial reaction is. I opposed, and still do, the imposition of canonical penalties as was proposed and publicly discussed and threatened in the abortion debates. If I did then, I must now.

So what should be happening right now. I regard Cardinal Tobin as a positive influence on the USA hierarchy. I find his suggestion of a visit to the detention centers notable but not very assertive. We don’t need just “signs” of Catholic hierarchical concerns. We need some deliberate actions. How about a letter condemning the policy from USA Bishops read from every pulpit on the same Sunday? How about an instruction to USA Catholics that anyone in any way involved in such activities needs to meet with a pastor to discuss their moral duties and responsibilities to the victims in such situations? How about a cadre of clerical, religious and lay persons assigned by local Bishops to be present at the detention centers to ride herd over what is happening in them?

The Southern Baptists passed a resolution opposing the policies. Good for them, but they are doing nothing to implement their resolution. The net effect is meaningless. That’s why the Bishops need to do something communicative and actionable. Pope Francis welcomes immigrants, he places them in the Vatican. Doesn’t anybody else understand the significance of actions over words?

Just a small detail of your comment is not correct. Yes, Pope Francis has welcomed Syrian refugees and brought back 4 families from Lesbos. However, he did not “place them in the Vatican”. They were placed under the care for the St Egidio Community, a lay run organization founded in the 1960’s that does a lot of charitable work of all kinds, right now especially with refugees. Their headquarters are in the Trastevere area of Rome. They immediately found housing for the families in that neighborhood, got the adults into language school, kids into school and helped them find jobs. In other words full integration into the community. All 4 families are doing well but I have read at least one woukd like to return to their Homeland. So, not “in the Vatican”, but fully sponsored by and supported by the Vatican.

The deeper issue is: "What can I possibly DO about the severe, complex problems of immigration?"
There are literally MILLIONS of people who live in absolutely horrible, life-threatening conditions who want to flee to America. They can't all fit. Literally. Even if I wanted to invite them all to come and live in my home, that wouldn't be possible, and I would deprive my own children of the basic necessities if I were to attempt to accomplish that.
A more lasting solution would be to help foster conditions in the home countries that would support life. Now, how do we do THAT?
Unfortunately, some of the debates about immigration swirl around accusations--that if a person expresses reservations about unlimited immigration, then he MUST be uncaring, unchristian, and have a very hard heart. This person must be penalized.
What would be the "proper" way to avoid this type of penalty? What would one have to do? Just FEEL like "welcoming everybody"?
These types of "solutions" unfortunately do nothing to alleviate the enormous problem, and that is that there are millions of people who have very good reasons for wanting to come here, and the unavoidable fact that it is not humanly possible to say "yes" to most of them.
I live in America, in a decent, safe, neighborhood. A mere thirty miles from my home is an area where there are daily murders, horrific crime, rampant drug abuse, homelessness, poverty, and many children who don't know who their father is. If he's still alive, he's probably in jail. (I don't even have to tell you where I live; the conditions are the same in EVERY major city.)
One day each month, I go there to help the Missionaries. Many of my friends do the same. I don't mind telling you that even though it is frightening, I go; I want to help because these people are created in God's image.
So, am I an arrogant, elitist, uncaring bigot because I spend 29 out of 30 days in a good, safe environment, and use most of what I earn to support the family that God gave me?
The same PRINCIPLES that apply to immigration policy apply as to how we serve people who live in a location closer to home. People are people.
Again, the discussion should center around what is possible to do.

Canonical penalties would be likely to do more harm than good. The bishops should go to these detention centers to see for themselves what is happening there. They should publicize what they find. The bishops need to make reparations for supporting the criminal now in our White House during the 2016 campaign.