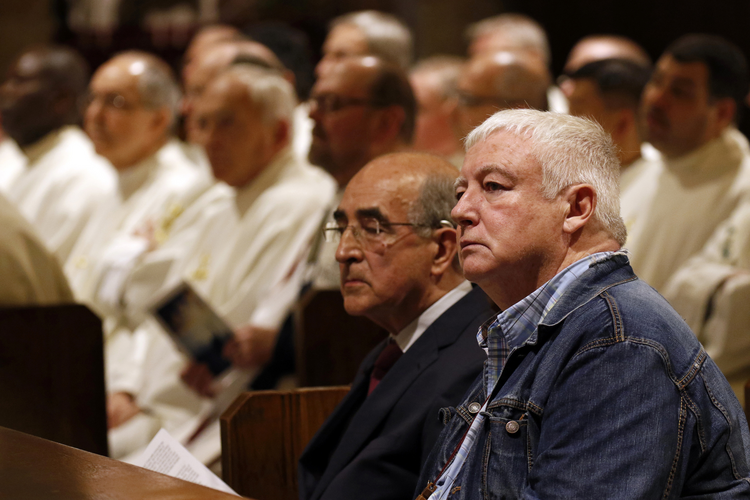 Michael Gilbride, right, a survivor of clergy sex abuse, listens to the first reading during a Mass of Hope and Healing for victims of sex abuse April 26, 2017, at St. Anselm Church in Brooklyn, N.Y. The U.S. Conference of Catholic Bishops released its annual report June 1 on the Protection of Children and Young People. (CNS photo/Gregory A. Shemitz)

The 15th annual report on the implementation of the U.S. bishops' "Charter for the Protection of Children and Young People" shows a decrease in allegations of clergy sex abuse from the two previous years but also indicates the need for continued vigilance since charges were raised by more than 650 adults and 24 minors.

The overall decrease in allegations coupled with the fact that charges of abuse are still being made is something Francesco Cesareo, chairman of the National Review Board, which oversees the audits, finds troubling.

In introductory remarks to the report released June 1, he said: "While progress continues to be made, there are worrisome signs for the future revealed in this year's audit that cannot be ignored."

He said he was most concerned by signs of general complacency such as a shortage of resources available to fully implement programs, failure by some dioceses to complete background checks in a timely manner and, in some cases, poor record keeping.

Cesareo wrote that this "apparent complacency" could indicate that some in the church think "sexual abuse of minors by the clergy is now an historic event of the past."

This view would be untrue, as the current report indicates, he said, adding: "Any allegation involving a current minor should remind the bishops that they must re-dedicate themselves each day to maintaining a level of vigilance that will not permit complacency to set in or result in a less precise and thorough implementation of the charter."

The newly released report -- based on audits conducted between July 1, 2016, and June 30, 2017 – shows that 654 adults came forward with 695 allegations. Compared to 2015 and 2016, the number of allegations decreased significantly due to fewer bankruptcy proceedings and statute of limitations changes. The report also notes that 1,702 victim/survivors received ongoing support and that all dioceses and eparchies that received an allegation of sexual abuse during the 2017 audit year reported them to the appropriate civil authorities.

The report acknowledges the church's ongoing efforts to ensure the safety of children and vulnerable adults pointing out that in 2017, more than 2.5 million background checks were conducted on church clergy, employees and volunteers and more than 2.5 million adults and 4.1 million children have been trained on how to identify the warning signs of abuse and how to report those signs.

The report's introductory remarks stress the importance of the honesty of victims and survivors who have come forward.

"It is because of these brave individuals that victim assistance and child protection are now central components of the church," wrote Cardinal Daniel N. DiNardo of Galveston-Houston, president of the U.S. Conference of Catholic Bishops, in the report's preface.

The cardinal stressed that implementing the charter is "not something that can be done by only one person. It takes the effort of multiple people in every diocese and in every parish to ensure that victims/survivors have opportunities for healing, and that the church is a safe place for children and vulnerable adults. "

It is also something that will remain a key part of the church in years ahead, as he said: "We must continually rededicate ourselves to keeping our promise to protect and pledge to heal."

The Center for Applied Research in the Apostolate, based at Georgetown University in Washington, gathers data for the report, and StoneBridge Business Partners, based in Rochester, New York, conducts the annual audits.

The annual report has two parts. The first is the compliance report of StoneBridge, which carried out on-site audits of dioceses and eparchies and reviewed diocesan documentation. Under canon law, dioceses and eparchies cannot be required to participate in the audit, but it is strongly recommended that they do.

The second part of the report is the "2017 Survey of Allegations and Costs," conducted by CARA.

According to the 2017 report, dioceses, eparchies and religious institutes reported $263,809,273 in total costs related to child protection efforts as well as costs related to allegations that from July 1, 2016, to June 30, 2017, which represents a 50 percent increase from the amount reported the previous year.

The USCCB has been doing these "audits" now for what, 15 years? And journalists continue to accept that misnomer! It doesn't s not speak highly of the profession.

We all have a right to know which dioceses and eparchies are refusing to participate in the audit. I hope this crucial information is not being hidden.