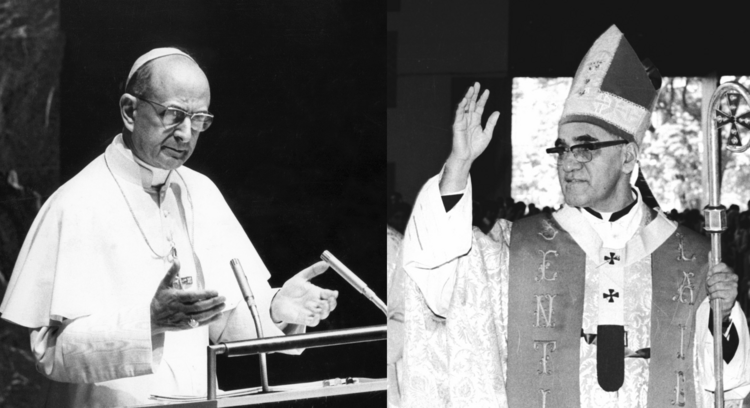 Blessed Paul VI and Archbishop Óscar Romero will soon be declared saints. Pope Francis opened the door to this declaration by authorizing the promulgation of the decrees that recognize miracles attributed to Pope Paul VI and the martyred archbishop of El Salvador.

The Vatican made this announcement today but did not say when the canonizations would take place. Sources in Rome say he will canonize Paul VI during next October’s synod of bishops. He could decide to canonize Archbishop Romero then, too, or he may opt to do so during World Youth Day in Panama, as the bishops of El Salvador would prefer, given Archbishop Romero’s significance in Latin America. Francis is expected to announce the dates for the canonizations during a public consistory in mid-May.

The Vatican said the pope authorized the decrees during a March 6 audience with Cardinal Angelo Amato, the prefect of the Congregation for the Causes of the Saints, in a private audience. In a meeting on Feb. 6, the commission of cardinals and bishops of the congregation had voted unanimously in favor of the recognition of miracles attributed to the intercession of the two blessed.

The commission then approved the decree for the miracle that is attributed to the intercession of Paul VI, who was pope from 1963 to 1978 and guided the Second Vatican Council to its end. The miracle related to the scientifically inexplicable positive conclusion of a high-risk pregnancy with the birth of a healthy baby.

On that same day, the commission also approved a miracle attributed to the intercession of the martyred Archbishop Romero who was killed in San Salvador on March 24, 1980 as he celebrated Mass. The miracle related to the cure of a woman in danger of death after giving birth.

Romero and Paul VI were close to each other in life and both are much revered by Pope Francis.

The news that the two will be declared saints is highly significant; they were close to each other in life and both are much revered by Pope Francis.

As pope, Paul VI was particularly attentive to Latin America and after issuing his famous encyclical “Populorum Progressio” (“On the Progress of Peoples”) in March 1967, went on to participate at the watershed plenary meeting of the Conference of Latin American Bishops Conferences in Medellín, Colombia, in 1968, to implement the teachings of the Second Vatican Council. That assembly affirmed the preferential option for the poor as an integral part of the church’s evangelizing mission on this continent. Pope Francis beatified Paul VI at a ceremony in St. Peter’s Square, on Oct. 19, 2014.

Archbishop Romero’s whole ministry was inspired by the teachings of Vatican II, Paul VI and Medellín, which led him to denounce the violence, torture and poverty in his homeland and to appeal to the soldiers not to shoot their fellow citizens, their brothers. Paul VI supported Romero and, the archbishop recalled, “held my right hand for a long time” during their last encounter in the Vatican. He told him that he understood “the difficult work” that he was engaged in, “which could be misunderstood” and required patience and courage.

Romero’s work was not only misunderstood in El Salvador but also in the Vatican. The cause of his canonization, which opened in 1997, encountered numerous obstacles, from both Latin American cardinals and the Roman Curia. The process was blocked until Francis became pope and recognized him as a martyr who died for his work in defense of human rights and for justice and peace. Cardinal Amato presided at the beatification ceremony for Archbishop Romero in San Salvador in May 2015.

What exactly was the Miracle attributed to Saint Romero? I cannot find an acknowledgement listed anywhere.

NPR reports the miracle was not made public while Archbishop Paglia, who is in charge of promotion for the cause, made a comment concerning a pregnant woman who was healed which was not in the official report. Too bad that Oscar Romero was associated with liberation "theology" as this certainly detracts from his sainthood but, even the saints aren't perfect. I imagine we should always look for the good in a person and try to ignore the sin.

That old liberation theology still haunts some of the " faithful " in the Church.

You mean the current liberation theology, the new and improved version?

It would be appropriate if Pope Francis went and said Mass where
Archibishop Romero was martyred.

I'm glad that both Pope Paul and Archbishop Romero will be made saints. Pope Paul is the first pope I remember, and I'm pleased that he did the difficult work of implementing the reforms of Vatican Ii. I also admire him for his courage in affirming the Church's teaching against contraception, and recognizing the good of natural family planning. I believe that widespread use of contraception has led to the acceptance of sex before marriage, and cohabitation. Further, I believe that contraception has reinforced men viewing women as mere objects for pleasure, not as equal partners in marriage. Finally, some purported "contraceptive" methods are in fact early abortions , so the Pope wisely defended the right to life of the unborn. In college, I read a book of the sermons and other writings of Archbishop Romero, "Voice of the Voiceless." I was impressed by his defense of the poor and other people on the margins of society , despite his innate shyness. It was courageous of the Archbishop to stand up to those who threatened human rights in his nation. He tragically was murderered, apparently by immoral El Salvadoran military members, while celebrating Mass.