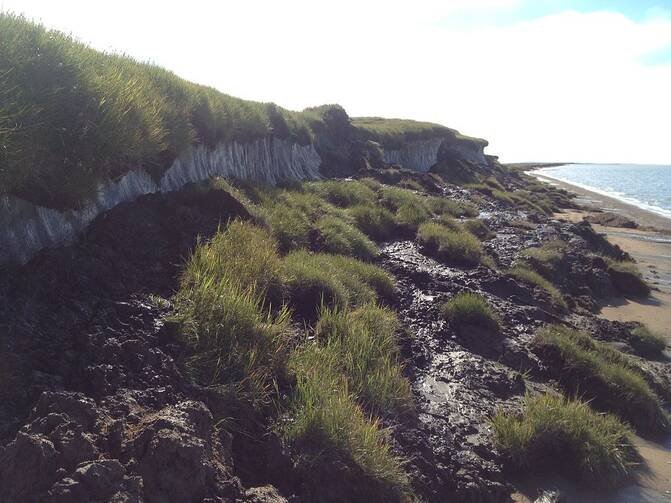 Pope Francis wants it clear that his first encyclical is to be appreciated as an addition to the church’s 124 year tradition of Catholic Social Teaching. How do we know? He tells us so right there at the beginning in number 15: “It is my hope that this Encyclical Letter, which is now added to the body of the Church’s social teaching [my italics], can help us to acknowledge the appeal, immensity and urgency of the challenge we face.”

Perhaps he hopes to pre-empt a push back from those in the church who argue that instruction in “science” from Pope Francis can be taken with a grain of sodium chloride and his prescriptions for a cure for what ails the earth and the human heart ignored as one deems fit. Pope Francis wants the readers of “Laudato Si’” to understand the seriousness with which he expects them to consider its arguments and proposals by enwrapping it within the C.S.T. tradition. But even if Francis had not explicitly told us so, it becomes clear pretty quickly how solidly this encyclical will stand with other papal letters, from 1891’s "Rerum Novarum" onward, that helped build the church’s teaching on social concerns.

“Laudato Si’” incorporates a number of the regular themes of C.S.T., including its promotion of solidarity, stewardship and the common good; preferential attention to the poor and preserving human dignity. The tradition—and this latest contribution to it—details the conditions of authentic human development and implores economic systems in service of people, not the other way around.

A consistent theme in Catholic Social Teaching, solidarity is usually meant to suggest a mystical, merciful connection among all the world’s people that overcomes the separation of borders, class, language and faith. At times, especially regarding issues around the environment and sustainable economic development, it has been broadened to include the idea of of an inter-generational solidarity that acknowledges this generation’s obligation to the next, that it bequeath to them a world at least as unspoiled and bountiful as the one it inherited. Pope Francis puts this concept to work in “Laudato Si’”.

“The notion of the common good also extends to future generations,” he writes in paragraph 159. “The global economic crises have clearly demonstrated the baneful effects of disregard for our common destiny, which perforce includes those who come after us.”

He adds, “We can no longer speak of sustainable development apart from intergenerational solidarity. Once we start to think about the kind of world we are leaving to future generations, we look at things differently; we realize that the world is a gift which we have freely received and must share with others.… Intergenerational solidarity is not optional, but rather a basic question of justice, since the world we have received also belongs to those who will follow us.”

But in “Laudato Si’”, Pope Francis broadens the idea to promote a kind of planetary solidarity with the earth, its inhabitants and the whole of creation. “Nature cannot be regarded as something separate from ourselves or as a mere setting in which we live” (No. 139), he writes. Human beings have the responsibility to “‘till and keep’ the garden of the world (cf. Gen 2:15)” (No. 67), knowing that “the ultimate purpose of other creatures is not to be found in us. Rather, all creatures are moving forward, with us and through us, towards a common point of arrival, which is God” (No. 83).

The notion of subsidiarity, that higher levels of authority should restrain themselves from matters that can be competently addressed at lower levels of authority, is a hallmark of Catholic Social Teaching. Pope Francis employs subsidiarity within the text and within the structure of the encyclical itself. Throughout “Laudato Si’” Pope Francis demonstrates a kind of rhetorical subsidiarity, building his case for protecting human and terrestrial ecology through citations from bishops’ conferences and statements from around the Catholic world. (He is similarly careful to cite sources of wisdom from different faith traditions—perhaps a means of reaching toward the global solidarity that will be required to respond to climate change.)

He invokes an expanded understanding of the concept, positive subsidiarity—that higher levels of authority are obligated to respond to problematic social conditions as competencies and resources dictate—as an imperative to the vast and complex humanitarian and ecological emergencies engendered by climate change. In terms of mitigating its worst effects, Pope Francis believes the burden should fall heaviest on those governments with resources adequate to the job. As a happy coincidence, they tend to be located in those high-consumption, high-wealth societies most responsible for producing the greenhouse gases which are propelling climate disruptions.

“Reducing greenhouse gases requires honesty, courage and responsibility, above all on the part of those countries which are more powerful and pollute the most,” he writes in paragraph 169.

He adds in 170: “Some strategies for lowering pollutant gas emissions call for the internationalization of environmental costs, which would entail imposing on countries with fewer resources burdensome commitments to reducing emissions comparable to those of the more industrialized countries. Imposing such measures penalizes those countries most in need of development. A further injustice is perpetrated under the guise of protecting the environment. As usual, the poor end up paying the price. … there is a need for common and differentiated responsibilities. As the bishops of Bolivia have stated, ‘the countries which have benefited from a high degree of industrialization, at the cost of enormous emissions of greenhouse gases, have a greater responsibility for providing a solution to the problems they have caused.’”

The Catholic notion of “authentic development” also makes an appearance in “Laudato Si’.” That concept should not be confused with the idea of “sustainable development” regularly discussed in economic and international development circles (and frequently noted as an aspect of authentic development by Pope Francis). Sustainable development might be put to best use in descriptions of the economic and physical infrastructure and investment choices made to propel systems of production and consumption which do not permanently exhaust regional human or environmental resources.

For Catholics “authentic development” accepts the importance of sustainable systems, but extends toward a holistic understanding of the interaction of economies and the rights and dignity of people. Authentic development includes attending to the spiritual and material fulfillment of the primary focus of economic systems, the human person and his or her dignity and full self-expression. “Social love is the key to authentic development,” Pope Francis says in paragraph 231, adding in a quote from the Pontifical Council for Justice and Peace, “'In order to make society more human, more worthy of the human person, love in social life—political, economic and cultural—must be given renewed value, becoming the constant and highest norm for all activity.’…social love moves us to devise larger strategies to halt environmental degradation and to encourage a ‘culture of care’ which permeates all of society. When we feel that God is calling us to intervene with others in these social dynamics, we should realize that this too is part of our spirituality, which is an exercise of charity and, as such, matures and sanctifies us.”

“Laudato Si’” often puts standard themes of Catholic Social Teaching to novel use. It argues for a judicious, sustainable use of the world’s resources, not just because that best responds to the crisis of climate change, but because care of creation itself acts as an expression of solidarity with the poor in the developing world. This is a key interweaving that Francis consistently employs, in this instance refuting the suggestion that good environmental stewardship and protecting the human dignity of the world’s poor create clashing interests. Francis argues that this is a false trade-off, that the global poor are materially harmed by the degradation of the planet and protected in conjunction with care of creation.

“‘Peace, justice and the preservation of creation are three absolutely interconnected themes,’” he writes, “‘which cannot be separated and treated individually …’ Everything is related, and we human beings are united as brothers and sisters on a wonderful pilgrimage, woven together by the love God has for each of his creatures and which also unites us in fond affection with brother sun, sister moon, brother river and mother earth” (No. 92).

Francis pushes back in “Laudato Si’” against the ideologically mired assurance that “reproductive rights” bent on human depopulation may be the only practical response to climate change, pointing out that it is overconsumption, not human numbers, which is propelling the crisis. A lifestyle change is required in the first world, not depopulation in the developing world,  a change that promotes another key theme in Catholic Social Teaching, the common good: In paragraph 23, the pope writes, “The climate is a common good, belonging to all and meant for all.” And because of the perils of climate change produced by global warming, in service to the common good “humanity is called to recognize the need for changes of lifestyle, production and consumption, in order to combat this warming or at least the human causes which produce or aggravate it.”

Francis demonstrates the interconnectedness of both the problem addressed by “Laudato Si’” and a hoped-for cure—a conversion of heart and practice. In 158, he writes, “In the present state of global society, where injustices abound and growing numbers of people are deprived of basic human rights and considered expendable, the principle of the common good immediately becomes, logically and inevitably, a summons to solidarity and a preferential option for the poorest of our brothers and sisters. This option entails recognizing the implications of the universal destination of the world’s goods… it demands before all else an appreciation of the immense dignity of the poor in the light of our deepest convictions as believers.”

These lifestyle decisions aimed at reducing consumption help preserve the earth and protect human dignity, even as they begin a salvific shift for people in affluent societies. Just as poverty and ecological exploitation scandalously diminish creation and human dignity in the developing world, an empty, aching consumption-ism mires authentic development in the so-called advanced economies. Breaking free of that hindrance is a kind of development that cannot be measured in GDP and rates of consumption and income, but by bigger hearts, more peaceful and generous spirits and a recognition of the interconnectedness of all people and all the fragile gifts of creation.