How do you rate Pope Francis’ handling of sex abuse in the church? 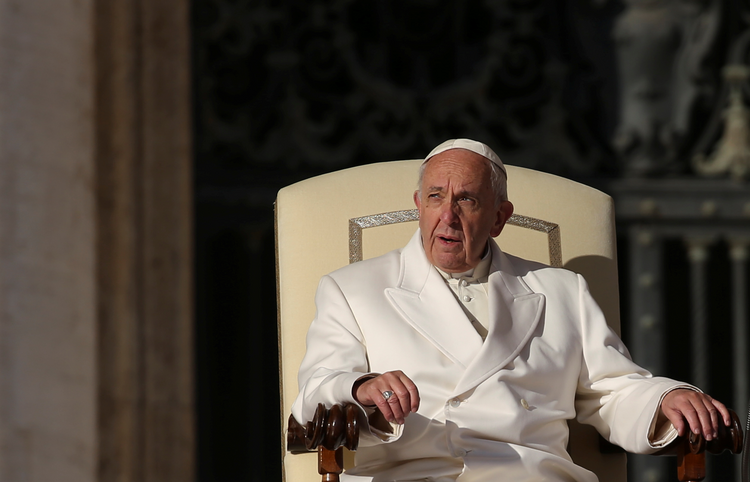 On the whole, respondents who answered either “very positive” (14 percent) or “somewhat positive” (31 percent) highlighted how Pope Francis is listening to victims of abuse. “Pope Francis has been a very heartfelt contributor to those families who are still suffering from the effects of sex abuse at the hands of clergy,” wrote Rylee Hartwell of Joplin, Mo.

Most of those in the “somewhat positive” camp expressed a desire for Pope Francis to do more to prevent and address sex abuse in the church. Chris Carroll of Philadelphia alluded to Pope Francis’ defense of Bishop Juan Barros, who has been accused of being present during instances of sex abuse by the notorious Chilean predator, the Rev. Fernando Karadima. “The pope has not gone as far as I would like,” said Mr. Carroll. “The church is still protecting some clergy.”

Most of those in the “somewhat positive” camp expressed a desire for Pope Francis to do more to prevent and address sex abuse in the church.

Respondents who rated Pope Francis’ handling of sex abuse in the church as “very negative” (15 percent) or “somewhat negative” (30 percent) were particularly critical of what they saw as the pope’s failure to hold members of the clergy accountable. These readers also criticized his efforts to prevent future abuse. John Bauer of Biloxi, Miss., described the pope’s leadership on this issue as “somewhat negative” in response to this question. “I love this pope,” Mr. Bauer wrote. “He is wonderful in all his teaching and pastoral care. But this area is a weak point.”

Kristen Balan-DiBella of Westfield, Ind., said that Pope Francis’ attempts to hold clergy accountable for sex abuse have been insufficient. “Pope Francis, through his decisions to keep Cardinal Bernard Law at the Vatican, including having his burial there, as well as his insistence on Bishop Barros’s innocence, shows a distinct lack of understanding of sex abuse,” said Ms. Balan-DiBella. “The percentage of false accusations is almost nil. The lifelong, far-reaching detrimental effects of sex abuse are widely known. The research is very clear that sex abuse (including those who are accessories) is a heinous crime. Nothing less than denouncing the acts and the abusers/accomplices will suffice.” 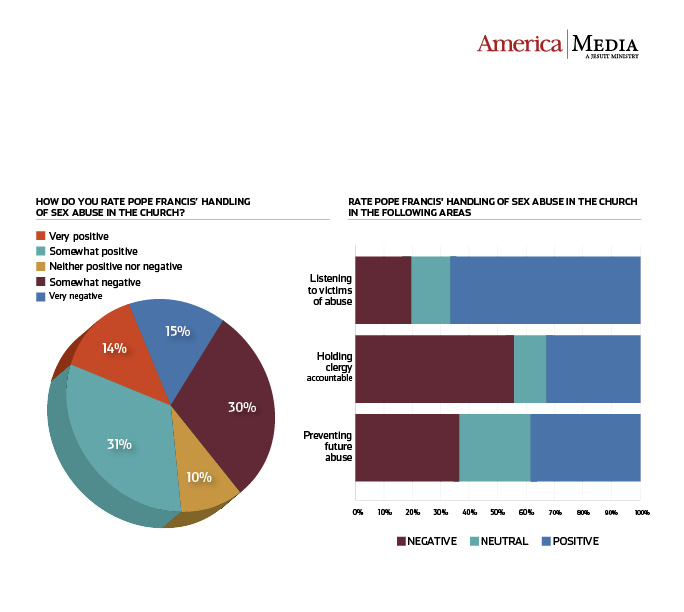 To the women who commented about Pope Francis keeping Law at the Vatican: Law did not live at the Vatican when John Paul 2 provided him a position to escape Boston. He lived at a Roman Basilica that as far as I know is not owned by the Vatican. His funeral was held in St Peter’s at the back altare as is common for all cardinals who die in Rome but he is not buried at the Vatican.

Authority figures still have to be held accountable and punished as needed. If indeed the Catholic Church wants to claim authority from God. Otherwise it is nothing more than another institution defending its own.

Considering the new information presented on World Over EWTN last night the Pope knew in advance about the abuse going on in Chili. Sadly the Pope must resign. He is no different than other Bishops who knew what was going on and did nothing

The words of Pope Francis:
1. strong denunciations of sexual abuse,
2. favorable mentions of zero tolerance,
3. private meetings with a small number of survivors during his travels.

The actions/inactions of Pope Francis:
1. In August and September of 2017, shielding Msgr. Carlo Capella from both US and Canadian authorities for their investigations of him on child pornography charges. Capella was whisked back secretly to Rome from his post at the Vatican embassy in Washington, DC. He avoids secular criminal prosecutions thanks to the Church’s protective cover-up.

2. See comprehensive documentation and history of Bergoglio’s record in Argentina at http://www.bishop-accountability.org/Argentina/Database.htm
“We have examined news and court archives to identify more than 70 clergy in Argentina publicly accused of sexually abusing minors and vulnerable adults. As of October 2017, at least nine appeared still to be in active ministry:
Brizzio, Cacciuto, Del Castillo, Dorado, Gauna, Martinez, Narvais, Squizziatto, and Yulán.
Most of these cases involve alleged abuse that occurred in the last 20 years.”
Zero tolerance - hardly. Read of Bergoglio’s direct involvement.

3. Francis’ Papal Commission regarding sexual abuse of minors sits in apparent limbo. The two survivor members are gone out of disgust with the lack of progress. The effort to establish procedures to hold complicit bishops accountable was shelved due to opposition; the terms of Commission members have expired; supposedly new members will be named at some indefinite period in the future. All bureaucratic talk, lack of funding. The record is one of stunning failure.

The number of cases where Pope Francis was approached personally about sexual abuse and did nothing seven times is referenced on a Bishop-Accountability.org posting at http://www.bishop-accountability.org/news2017/11_12/2017_12_04_Clermont_TwoNew.htm

Here is another example, beyond the case of Bishop Barros in Chile:
“By open letter and video message “handed to Pope Francis” in May 2014, former students at the notorious Provolo Institute for the Deaf in Italy begged the pope for justice. More than one hundred deaf and mute children had been sexually abused at the boarding school.

The letter told Pope Francis that three of the accused Italian perpetrators – including Fr. Nicola Corradi – held current positions at the Provolo Institute in Argentina. The pope took no action to stop them. (See Corradi’s full record at http://www.bishop-accountability.org/Argentina/Database.htm#Corradi)

Corradi and four others in the Argentine school were arrested in November 2016 and charged with raping and molesting at least 22 children. Other reports poured in and “it’s now thought that as many as 60 children fell victim to abuse.”

When are Catholics going to wake up?

In the interest of education, here are original documents and backgrounds of "17 Active Bishops Accused of Complicity with Abusive Priests" in a database at http://www.bishop-accountability.org/bishops/enabling/index.html

Thank you to Fr. Tom Reese SJ who indicates that Pope Francis needs to up his game regarding sexual abuse, in an NCReporter article 1/25/18:. Title: "Pope Francis' blind spot on sexual abuse"
https://www.ncronline.org/news/opinion/signs-times/pope-francis-blind-spot-sexual-abuse