Is it possible to blend yoga and Catholicism? 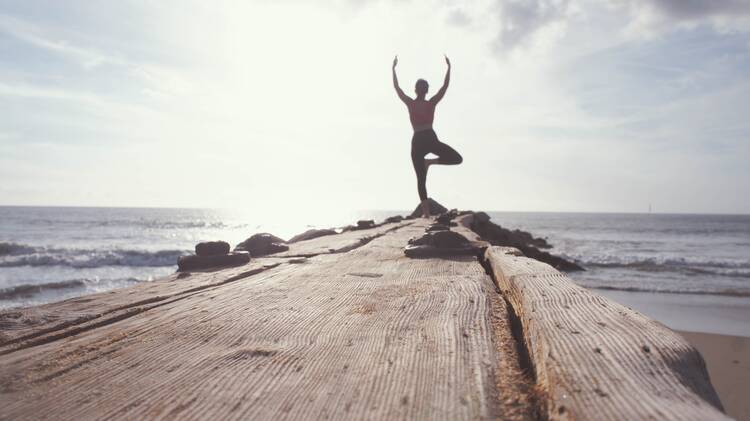 Is yoga cultural appropriation? Is it just stretching? Is it possible to blend yoga and the Catholic faith? This week we get into these questions and more with Bobby Karle, S.J., the founder of Ignatian Yoga, a practice that draws on Ignatian spirituality and yoga. Through Ignatian Yoga, Bobby offers classes, retreats and workshops centered around the core principles of Ignatian spirituality, like finding God in all things and living a life of self-awareness and discernment, and yoga practices like breathing meditations and vinyasa flow.

In Signs of the Times, we talk Catholic dioceses suspending the sign of the peace due to flu outbreaks; priests in cassocks competing for the John Paul II Cup; and Pope Francis celebrating the marriage of two flight attendants during a papal flight.

“Going, Going, Gone: The Dynamics of Disaffiliation in Young Catholics” is a new study that seeks to understand why so many young Catholics leave the faith they were born into. We get into the study, our own experiences growing up in the church and some of the study’s most interesting findings. Should older married men become priests in order to serve isolated Catholic communities? Cardinal Beniamino Stella, of the Congregation for Clergy, says yes. Finally, we get into Pope Francis’ latest handling of sexual abuse allegations against clergy.

Make sure to leave us a review on Apple podcasts. If you already have, thank you! And don’t forget write us an email at jesuitical@americamedia.org, where you can share your own consolations and desolations or drink recipes, and follow us on Twitter @jesuiticalshow.

Catholic diocese suspends ‘sign of peace’ due to flu