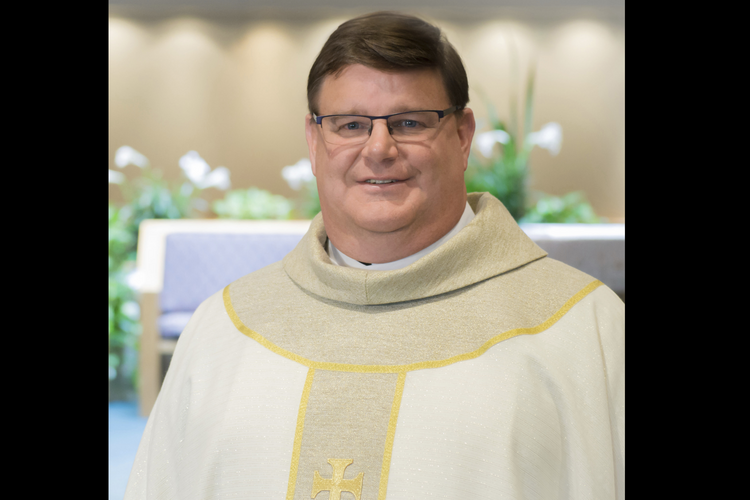 MILWAUKEE (AP) — A Roman Catholic priest in Milwaukee has come out as gay, writing that he will no longer live in the shadows of secrecy and plans to be authentic to his gay self.

The Rev. Gregory Greiten disclosed his sexual orientation on Sunday to the St. Bernadette Parish and was greeted with a standing ovation from his parishioners, the Milwaukee Journal Sentinel reported . He also wrote a column that was published Monday in the National Catholic Reporter.

It's rare for a priest to come out. Greiten said he revealed his sexual orientation because he wants to be a role model for others. He said he's helping to break the silence of gay men in the clergy so he could reclaim his own voice.

"I will embrace the person that God created me to be"

"I will embrace the person that God created me to be," Greiten wrote. "In my priestly life and ministry, I, too, will help you, whether you are gay or straight, bisexual or transgendered, to be your authentic self — to be fully alive living in your image and likeness of God.

Greiten wrote that has decided to stand with the "few courageous priests who have taken the risk to come out of the shadows and have chosen to live in truth and authenticity."

The church's silent stance on gay priests perpetuates toxic shaming and systematic secrecy, Greiten wrote. The church needs healthy role models for priests who are struggling to come to terms with their sexual orientation, he said.

Greiten met with Milwaukee Archbishop Jerome Listecki before coming out, according to an archdiocese spokeswoman.

"We support Father Greiten in his own personal journey and telling his story of coming to understand and live with his sexual orientation," Listecki said in a statement Monday. "As the Church teaches, those with same-sex attraction must be treated with understanding and compassion."

This seems to me an incompatible disclosure. The Church considers homosexuality a sin. So to applaud for a sinful way of life, makes no sense. Does being authentic mean active in that capacity? This is like condoning and applauding all the priests that molested as sinners in good standing. What exactly does a gay priest do, advise other gay parishioners to continue sinning? If he is not going to be an active gay person/priest, what is the purpose to coming out? Will he be promoting homosexuality from the pulpit or confessional? Isn't that promoting sin? If no one knew that he was homosexual then, how will they know that he is homosexual now? Does he have any documents to prove what he says he is. If he said that he was a Martian Alien, would the Church simply take his word? That he would help other Martians and be a role model for them? Is the Church accepting sin? Sinners yes, but to advocate for someone who will NOT sin no more, and knowing that this sin is their forte'. This gives the Church approving sin a new meaning.

I’m not sure what church Ken Church is referring to. The Catholic Church does not consider homosexuality a sin. And somone much more worthy than both of us said “who am I to judge?” I am a heterosexual woman but that does not mean I am actively sinning because of my nature. And my past life includes sexual harassment on the part of an active heterosexual priest. Perhaps the purpose of “coming out” is to share his experience, strength and hope.

Father Nathan Reesman, a fellow priest in the Archdiocese of Milwaukee, and the chaplain for the Courage Apostolate in Milwaukee, has written a compassionate and theologically sound response to Reverend Gleiten's statement. It can be read here: https://exsulare.com/2017/12/21/on-coming-out-from-the-pulpit/amp/?__twitter_impression=true

In addition to his "coming out,"I would like to have heard Fr. Greiten tell his parishioners that he is comitted to living a chaste, celibate life. That he asks the Lord for daily bread: the grace to face and withstand the daily temptations that confront him. That would be a courageous act, indeed.

He doesn't need to say it; it's apparent from the fact that he continues in his vocation. Being homosexual does not preclude chastity, and those who, like the person above, think that way are extremely prurient, sex-obsessed and have their minds in the gutter. They wish the "same-sex attracted" to remain silent, so that they can continue to ignore the acts of cruelty and violence performed every day against gay children and youths, in churches, in schools and in sports teams. "Silence," does, indeed, "kill" the spirit, and those who wish those gay children to remain loyal to the Church must TELL them to "come out" and ask for the compassion and solidarity that might support them to lead chaste lives. (With the implicit understanding that "chastity" does not necessarily preclude union with another human being--just as it doesn't in monogamous heterosexual marriage.)

Those who are ignoring the acts of cruelty and violence performed every day against children and youths are the enablers of abusers who tolerate abusers lying to children telling them there is such a thing as being a child and gay.

Finally a brave soul steps forward! God bless you, Fr. Greiten.
Fr. Greiten is responsible to God alone when it comes to "sin". How very quick we are to pass judgement on others! And, how arrogant of us to think that we are in the position to pass judgement on others! If Fr. Greiten stepped up to the plate to reveal himself (in whatever way) that is his perogative. From the response of his parishioners, they had no problem with his revelation. Why would anyone want to know if he is sexually active? It is NONE of YOUR BUSINESS!

Will he be moving out of the shadow of the Church and finding a Job to support his homosex 'lifestyle' - or is that up to the Parish as well?
Such acts of Militant Political Mau-Mauing seeking to demean, degrade and destroy Catholic Moral Teachings are completely at odds to the Priestly Vocation. SEE

Vatican reiterates that homosexuals shouldn’t be priests
https://cruxnow.com/global-church/2016/12/07/vatican-reiterates-homosexuals-shouldnt-priests/
ROME— In a new document on the priesthood, the Vatican’s Congregation for Clergy has reiterated that men with “deeply rooted homosexual tendencies” shouldn’t be admitted into Catholic seminaries and, therefore, shouldn’t become Catholic priests.

That position was initially stated by the Congregation for Catholic Education in 2005, but it was re-stated in a document released on Wednesday...

“If a candidate practices homosexuality or presents deep-seated homosexual tendencies, his spiritual director as well as his confessor have the duty to dissuade him in conscience from proceeding towards ordination,” the document released this week says, in a direct quote from the text of eleven years ago...

The document says when it comes to gay men who want to enter the seminary, or discover they have “homosexual tendencies” during the formation years, the Church, “while profoundly respecting the persons in question, cannot admit to the seminary or to holy orders those who practice homosexuality, present deep-seated homosexual tendencies or support the so-called ‘gay culture.’”

It also says that the Church can’t overlook the “negative consequences that can derive from the ordination of persons with deep-seated homosexual tendencies.”

Seventh, the document says that dioceses and religious orders must be on guard not to admit potential sexual abusers to the priesthood.

“The greatest attention must be given to the theme of the protection of minors and vulnerable adults,” it says, “being vigilant lest those who seek admission to a seminary or a house of formation, or who are already petitioning to receive Holy Orders, have not been involved in any way with any crime or problematic behavior in this area.

Good summary of church teaching on this subject.

Good summary of church teaching on this subject.

"The Faithful Departed is a hard book to read. I do not mean in its prose but in its content"
http://catholicism.org/faithful-departed-review.html

Review of The Faithful Departed: The Collapse of Boston’s Catholic Culture by Philip Lawler
*In 1985 the US bishops received a confidential report on sexual abuse by clerics, warning them that there was “simply too much at stake for the Church” for the hierarchy to ignore the issue. (From the Introduction to The Faithful Departed ) "

Perhaps no one but the one-time editor of Boston’s Archdiocesan paper could have written this disturbing book. Certainly, no one else could have written it with such intimate and comprehensive objectivity. It took a local Catholic writer, who lived through the worst of the sordid events that are recounted in these 258 pages, to present the painful history honestly and without attenuation.

The clerical sex-abuse scandal that engulfed what once was a Catholic city, and is still undermining the Church throughout the United States, was not the fruit of one perverse generation, which just happened to have had a percentage of its bad apples infiltrate Catholic seminaries and religious orders. What Lawler demonstrates so convincingly is that the corruption of so many of the clergy is directly related to so many bishops opting to be successful administrators, public relations players, and damage control manipulators, rather than spiritual fathers animated by zeal for souls. A bishop in the United States, prior to the sexual abuse scandal becoming public, held great prestige in his community. He was invited to a variety of gala events, charitable fund raising banquets, and political socials. He often was awarded honorary degrees from secular universities, which were nothing more than a form of bribery to stay on the wide road and not venture beyond the humanist pale. It was easy to become a hireling if one was not one at the start; it was easy to become more and more ambitious...

For Lawler, there are three scandals that make up the abuse crisis. The first, and most damaging for all the victims, was the abuse of children and teens, almost always boys, by priests and brothers.
The vast majority of the cases involved teenage abuse, ephebophilia, in distinction with pedophilia, which is the even sicker abuse of children.

The second scandal, which our author amply demonstrates is still unattended to, is the problem of homosexual priests and brothers. (He does not mention sexually disoriented sisters, but that is another crisis that certainly has affected some of the more liberal orders of nuns.)

Lawler devotes a number of pages in his book to prove how ardently the collective USCCB and individual bishops avoid any question that raises the subject of accountability in purging the seminarians of those with homosexual proclivities. Nor do the bishops address the problem of sexually disoriented priests who promote, defend, or live the “gay” lifestyle. This scandal, so directly related to the first, has also left the Church still severely wounded...