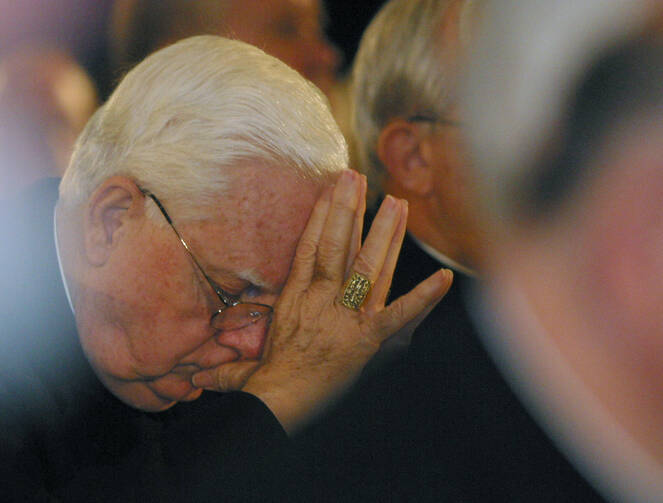 Boston Cardinal Bernard F. Law bows his head as a victim of clergy sexual abuse begins to address the U.S. bishops in 2002 in Dallas (CNS photo by Bob Roller).

Cardinal Seán O’Malley, the archbishop of Boston who took over the reeling archdiocese following the resignation of Cardinal Bernard Law in 2002, reflected on the death of his predecessor by remembering victims of clergy sexual abuse in a statement released on Dec. 20.

“I recognize that Cardinal Law’s passing brings forth a wide range of emotions on the part of many people. I am particularly cognizant of all who experienced the trauma of sexual abuse by clergy, whose lives were so seriously impacted by those crimes, and their families and loved ones,” said the cardinal, who heads the pope’s commission for the protection of minors. “To those men and women, I offer my sincere apologies for the harm they suffered, my continued prayers and my promise that the Archdiocese will support them in their effort to achieve healing.”

Cardinal Law will be buried in Rome on Thursday. Adhering to custom for the death of a cardinal, his funeral will be presided over by Cardinal Angelo Sodano, head of the college of cardinals. The Mass will be held inside Saint Peter’s Basilica and Pope Francis will give the final blessing.

The optics of the ceremony are expected to cause controversy in the United States among Catholics who were outraged that the late cardinal was assigned a prestigious position in Rome in 2004 by Pope John Paul II. He served as archpriest of the Basilica of St. Mary Major, one of four principal basilicas in Rome, until he retired in 2011.

“We highly doubt there is a single victim of abuse who will ever receive the same attention, pomp and circumstance by Pope Francis. Every single Catholic should ask Pope Francis and the Vatican why.”

A statement from the Survivors Network of Those Abused by Priests, or SNAP, said, “We highly doubt there is a single victim of abuse who will ever receive the same attention, pomp and circumstance by Pope Francis. Every single Catholic should ask Pope Francis and the Vatican why.”

Pope Francis acknowledged the cardinal’s death in a telegram, in which he said he wished to “express my condolences to the College of Cardinals.

“I raise prayers for the repose of his soul, that the Lord, God who is rich in mercy, may welcome him in His eternal peace, and I send my apostolic blessing to those who share in mourning the passing of the cardinal, whom I entrust to the maternal intercession of the Virgin Mary Salus Populi Romani,” the telegram concludes.

The pope’s matter-of-fact tone in the telegram stands in contrast to other recent telegrams marking the deaths of other cardinals, a change noted by some Vatican reporters Wednesday morning. Earlier this year, for example, when Cardinal Ricardo Vidal died, the pope wrote that he was “deeply saddened” and noted the late cardinal’s “untiring and devoted service to the Church.”

Cardinal O’Malley said the late cardinal, who died at a hospital in Rome, “served at a time when the Church failed seriously in its responsibilities to provide pastoral care for her people, and with tragic outcomes failed to care for the children of our parish communities.”

Cardinal O’Malley said the late cardinal “served at a time when the Church failed seriously in its responsibilities to provide pastoral care for her people.”

But the Boston archbishop and adviser to Pope Francis also expressed sadness that the late cardinal, who had worked for civil rights in the U.S. south and rose to the highest echelons of church service, would be reduced to “one overwhelming reality, the crisis of sexual abuse by priests.

“This fact carries a note of sadness because his pastoral legacy has many other dimensions,” Cardinal O’Malley said, pointing to his predecessor’s work in Catholic-Jewish relations, immigration and care for the sick.

Rabbi James Rudin, senior inter-religious affairs advisor at the American Jewish Committee, said in a statement that it is also important to recall Law’s early support for civil rights and his global leadership in “building human bridges of mutual understanding and reconciliation between Catholics and Jews.”

Rudin, who worked with Cardinal Law when he led the U.S.C.C.B.’s commission on ecumenical and interreligious affairs, said the prelate “understood the historic significance of the Second Vatican Council’s call in 1965 for a positive change in the Church’s teachings about Jews and Judaism, and he took actions to implement that revolutionary reform.”

In a separate statement, the U.S. Conference of Catholic Bishops also said that the cardinal’s death “will likely bring back painful memories for survivors” and urged those with knowledge of abuse to contact church officials or law enforcement.

Cardinal Daniel DiNardo, the president of the U.S.C.C.B., pointed to Cardinal O’Malley’s statement and also offered prayers for “the brave survivors of sexual abuse.

The U.S. Bishops noted the cardinal’s death “will likely bring back painful memories for survivors”

“Their witness would lead to a comprehensive response from the Church in the United States to protect and heal the deep wounds of abuse. I pray they may find strength and peace in the mercy of Christ,” he said in a statement.

Voice of the Faithful, a lay-led group pushing for reform that organized after revelations of clergy sexual abuse, said in a statement Wednesday that the cardinal’s death “reminds us that so many of those damaged by the abuse and its coverup have yet to experience healing. We hope, particularly during this season of Advent, that we will see stronger support for that healing from the Church in the near future.”

Victims of clergy sexual abuse and their representatives said they are still angry at Cardinal Law’s mishandling of sexual abuse.

Mitchell Garabedian, a Boston attorney who has represented dozens of people who say they were sexually abused by priests, said that the cardinal’s death has reopened old wounds.

“Many victims are reminded of the pain of being sexually abused upon hearing of Cardinal Law passing away,” Mr. Garabedian said. “Cardinal Law turned his back on innocent children and allowed them to be sexually abused and then received a promotion in Rome.”

Alexa MacPherson, who says she was a victim of clergy sex abuse for six years as a small child, had no words of sorrow at the news of Cardinal Law’s death.

Ms. MacPherson’s mother Barbara Sidorowicz, whose two sons were also abused, also was not mourning him.

“I’m a person, I cannot ever turn my back on my faith, but I can’t find it in my heart to forgive,” she said. “I cry over what happened to my children, but I can’t cry over him. I can’t even get myself to say a prayer for him. He should have been in jail.”

Zac Davis contributed to this report. Material from the Associated Press and Religion News Service was used in this report.

I will remember all the victims of sexual abuse in our church who have not found healing, who have not received an appropriate response from the church, and who continue to suffer. Cardinal Law may be at peace, but many he left in his wake are not.