Hanukkah is not the Jewish Christmas—but they are cousins. 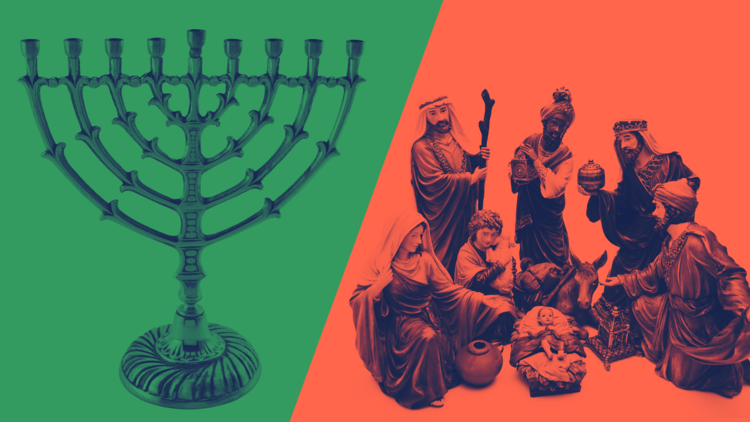 “Have a merry Christmas, Rabbi,” one of the students chirped as we both set off for our winter break. I am sure she meant well. But still, I wonder: Should I have tried to correct her? Chances are she would have countered, as another student had years ago, “But isn’t your Hanukkah basically the Jewish Christmas?”

At times like this I wish the semester for the course I teach in world religions was a couple weeks longer. Then I would have time to explain that the two holidays are actually very different. Christmas, after all, celebrates the birth of Jesus, whom Christians came to worship as the Christ, the messiah, the second person of the Trinity. Jesus plays no role in our religious life as Jews. However Jews might understand Jesus, and however much Jews and Christians increasingly make sense of the Gospels against the background of Jewish religion and history, Jews have no reason to include a celebration of Jesus’ birth in our already crowded calendar of holidays, holy days and festivals.

“Have a merry Christmas, Rabbi,” one of the students chirped as we both set off for our winter break.

It is the calendar, I believe, that causes the confusion. Most years, right around the time that Christians are celebrating the birth of Jesus, Jews are celebrating a holiday of their own: Hanukkah. By the time the events of the Gospels took place, Jews had been celebrating that holiday for almost two centuries. The holiday began as a national celebration of the victory of Jewish guerillas over the forces of the Syrian-Greeks.

In the second century B.C.E., a remnant of the army of Alexander the Great had come to dominate the Jews then living in their own land. In an effort to consolidate his power and to impose a cultural uniformity on his subjects, the Syrian-Greek ruler Antiochus Epiphanes insisted that the Jews worship him as the rest of his subjects did and demanded that a statue of himself be erected in the Jews’ Temple in Jerusalem. A family of priests known as the Hasmoneans (who came to call themselves the Maccabees) rebelled against Antiochus. Though they were far outnumbered, this guerilla band fought valiantly and defeated the oppressor’s army.

How could anyone confuse this holiday with Christmas?

Upon their victory, they found that the Temple in Jerusalem, the center of all Jewish worship, had been defiled and desecrated. In the course of cleaning and purifying it, they discovered that the oil for “eternal light,” which in accordance with biblical instruction was to never go out, had been reduced to only a single jar with enough oil to keep it burning for one day. But when the messenger returned from the eight-day journey to retrieve the special oil, miraculously, the light was still burning. The Hasmoneans became the rulers of the Jews and decreed that every year at that time a national holiday was to be observed. They called it Hanukkah, which means rededication.

The rabbis who came somewhat later and were not enamored of the Hasmoneans changed the focus of the holiday from a national celebration of the dynasty’s military victory to a celebration of the “great miracle that happened there”: the one-day supply of oil that burned for eight days.

Today, the customs and observances surrounding Hanukkah are familiar to most Americans: lighting the menorah, children spinning dreidels and, of course, latkes—potato pancakes fried in oil, in commemoration of the jar of oil that miraculously lasted for eight days.

Both Hanukkah and Christmas act out the hope that light can triumph over darkness.

How could anyone confuse this holiday with Christmas? In the United States, both have come to include an element that was not part of the original religious purpose of either holiday: gifts. Just as Santa Claus is not part of the Gospel account of the birth of Jesus, presents do not figure in the Hasmonean or rabbinic prescription of Hanukkah. And yet as Christmas presents began to loom larger, Jewish parents, not wanting their children to feel deprived, took to giving their children gifts at Hanukkah. As both celebrations became more centered on opening presents, the perception of the two very different holidays began to merge in popular thought.

Yet, even if the two holidays are so different in their religious, historical and cultural connotations, they may in a different sense still be “cousins.” Both of them respond to the same, very significant human reality. It is possibly no accident that both Christmas and Hanukkah fall when they do. Can it be a coincidence that both communities celebrate holidays at the time of the winter solstice? In the northern hemisphere, at the very time of year when the days are shortest, nights are the longest and the world is darkest and coldest, Jews and Christians, each in their own way, find themselves getting together as families in celebrations that involve lighting lights. Both act out the hope that light can triumph over darkness.

Human beings do not like the dark. We are eager to see it defeated. Jews and Christians alike celebrate miracles that reflect the hope that we can triumph over all the forces that afflict and oppress us. The light that is so central to both holidays represents this shared human affirmation. The stories we tell and the images we use are very different. But the human hope certainly seems the same.

“Have a merry Christmas, Rabbi,” was off the mark. But in another, unexpected way, it carried an important grain of truth.