Myanmar priest: military ‘still in control’—which is why Pope Francis met with them first 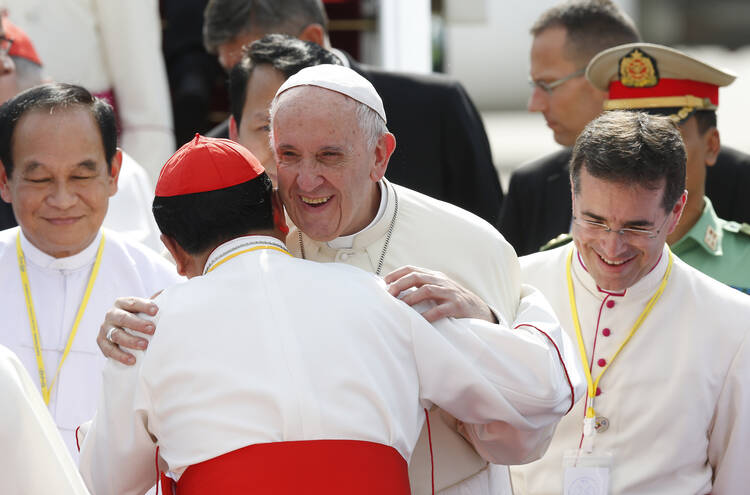 “It was essential that the pope met General Min Aung Hlaing, the commander in chief of the defense forces. He did well to do so,” a Myanmar priest, who asked not to be identified, told America. He said four other priests from this country agreed with him. He spoke after the meeting had taken place.

Pope Francis surprised many observers by meeting the general and four other military leaders this evening, at the archbishop’s residence, ahead of tomorrow’s meeting with the state president and state counsellor, Aung San Suu Kyi. Before he left Rome the Vatican had announced that he would meet the general on Thursday, Nov. 30. It gave no explanation for the change of plan, nor did it say who requested it.

“I was happy at this because I think it would not have been good if the pope only met the president and the state counsellor, because the fact is the military are still in control here even if we have a civilian government,” the priest said. “And perhaps, by talking to the general and the other military leaders [his friends] who accompanied him, the pope may be able to use words that soften their hearts.”

“The fact is the military are still in control here even if we have a civilian government,” the priest said.

He added, however, that many informed persons in Myanmar are convinced that there is “a shadow government” behind General Min Aung Hlaing, which is led by the country’s former military ruler, General Than Shwe.

The National Democratic Party led by Aung San Suu Kyi won by large margins in the national elections in November 2015, gaining 86 percent of the seats available in parliament, and took over the reins of government in April 2016. But according to this priest, the military do not really want a proper democracy in Myanmar They ensured this would not happen through the 2008 constitution, which gives them control of 25 percent of the seats in parliament as well as the ministries of defense and home affairs; they also have control of the country’s borders.

The military controls much of the natural resources and the economy through companies under their supervision.

Still, he said, the military controls much of the natural resources and the economy through companies under their supervision. He noted that up to now the income from the industries of wood, gas, petroleum and precious stones was presented under the balance sheet of individual government ministries and not under that of the central government.

He also recalled that under the 2008 constitution, drafted by the military, there is a clause that enables the military to come back to power in the country in situations of emergency. He said many in Myanmar believe that the military have created the very serious situation of the Rohingya in order to weaken Aung San Suu Kyi and her government. They can then blame her for creating “instability, conflicts and tensions in the country,” thereby creating a situation where she can be removed from power.

He said that Aung San Suu Kyi for her part does not have the constitutional power to give orders to the military, and she does not criticize them because as she said in a recent interview, “you have to convince me that you gain something simply by criticizing.” He said the Nobel Peace laureate is pursuing with determination her plan for “national reconciliation” in the hope of resolving the internal conflicts with the different ethnic groups that have led to the displacement of many thousands of people in north of the country and other places, as well finding a solution to the dramatic situation in Rakhine state.

The priest I spoke to thinks, and hopes, that the pope’s meeting with the military and his visit here can provide support for her effort to strengthen democracy in this land where, despite its vast natural resources, there is still much poverty and tension after decades of military rule.