Pope Francis faces a political minefield as he travels to Myanmar 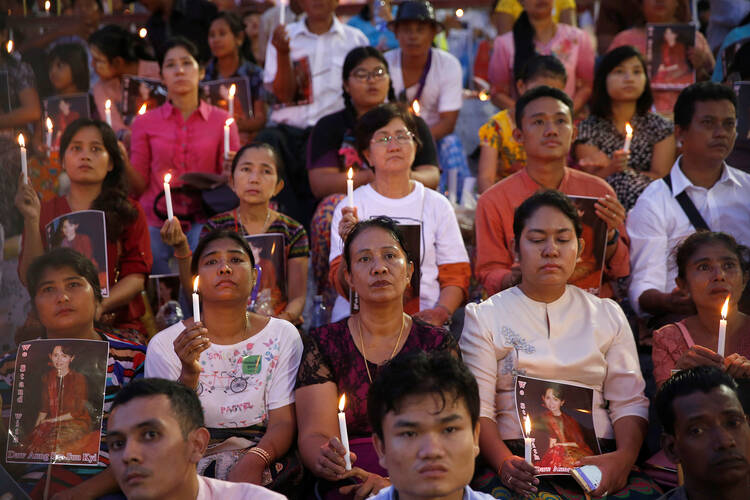 Pope Francis will be stepping carefully through a political minefield as he visits Myanmar from Nov. 27-30. This majority-Buddhist state with 52 million inhabitants is on an uphill road to full democracy because the military, which ruled for 60 years, still holds the balance of power.

On the eve of the pope’s visit, Bangladesh’s foreign minister announced that his country had struck a deal with Myanmar for the return of hundreds of thousands of these refugees, though the details are not yet clear.

“The Catholics are very excited; and also the other Christians," Cardinal Charles Bo told America on the eve of the visit. "The Buddhists, the Muslims and the Hindus too have been very cooperative, they’re very happy with the visit of the pope."

Myanmar’s two-year old democratically elected government has drawn worldwide criticism because of the persecution of the Rohingya.

Many inside and outside the country will be monitoring carefully what Francis will say and do during his visit. Aware of all this, Francis sought to spell out clearly the purpose of his trip in a video-message, on Nov. 17, to the inhabitants of this country.

“I come to proclaim the Gospel of Jesus Christ, a message of reconciliation, forgiveness, and peace,” he stated in “a word of friendship and greeting to all the people” of Myanmar.

These three things—“reconciliation, forgiveness, and peace”—are greatly needed in this country, which, after gaining independence from Britain in 1948, suffered under harsh military rule from 1962 to 2011. That period squashed the idea of greater autonomy or political representation that the main ethnic minorities had hoped for—and which Aung San Suu Kyi’s father was seeking to put in place before his assassination. Years of military rule exacerbated internal conflicts that started almost with independence and are still under way, between ethnic minorities—including the Kachin and Karen, among whom are many Christians—and the central government forces. The military sought to control the situation by force, displacing thousands of people, and inflicting widespread human rights abuses, and the repression of the Rohingya. (The government does not recognize the Rohingya as a minority ethnic group.)

The 60 years of military rule has left many tensions and open wounds in the body politic, which the new civilian government is seeking to address.

“I wish to visit the nation with a spirit of respect and encouragement for every effort intended to build harmony and cooperation in the service of the common good,” Francis said in his video message. Vatican officials told America they hope his visit can contribute to the strengthening of democracy in this land where 87.9 percent of the population are Buddhist, 6.2 percent Christian (including 750,000 Catholics), 4.3 percent Muslim, and the rest are Hindu and animist.

Religion plays a central role in the life of this country and in his video message, Francis emphasized “the need” for “believers and men of good will” in this land “to grow in mutual understanding and respect, and to support each other as members of the single human family, as we are all children of God.”

To promote dialogue and reconciliation, the pope will have to move with great prudence.

From the beginning of his pontificate, Francis has sought to promote the culture of encounter, dialogue, reconciliation and to avoid confrontation. He will seek to do likewise in this majority Buddhist land where Islamophobia has become widespread, especially after last August’s attack on border posts by the Arkan Salvation Army, a militant Muslim group. That attack provoked the army’s violent response against the Rohingya, several sources, including Cardinal Bo, the country’s first cardinal, told America.

To promote dialogue and reconciliation, the pope will have to move with great prudence. Cardinal Bo told America that “long before” the pope’s visit was under consideration, the Myanmar authorities asked him to refrain from using the word “Rohingya.” Notwithstanding that request, Francis used the word at least three times in public statements since then. Following the announcement of his visit, however, the country’s bishops as well as Kofi Annan, former UN Secretary General, and other diplomats strongly urged the pope not to use the “R” word in his speeches as, they said, this would greatly upset the government, the army and the majority Buddhist population. It would also undermine the possibility of constructive dialogue with the authorities, and it might even create problems for the local church and its relationship with the Buddhist community, they said.

On the eve of the visit, a senior Vatican source told America that the decision was taken “some time ago” that the pope would not use the “R” word in Myanmar.

The reason is clear, sources said: Francis is seeking to build bridges, not to blow them up. He is hoping to open channels of communication and encourage the Myanmar authorities to find positive solutions, respectful of human rights and constructive of peace, not only for the dramatic situation of the Rohingya but also for the conflicts between various ethnic groups and the central government.

The pope will have a private meeting with General Min Aung Hlaing, the commander-in-chief of the Armed Forces since 2011.

Coherent with that culture of encounter approach and encouraged by Cardinal Bo, the pope will not only meet the state president, Thein Sein Htin Kyaw, and state counsellor, Aung San Suu Kyi, he will also have a private meeting with General Min Aung Hlaing, the commander-in-chief of the Armed Forces since 2011.

Francis will meet the president and state counsellor on Nov. 28 at Nay Pyi Taw (“the seat of the kings”), the new capital city since 2006, which was built by decision of the military for reasons yet not clear. It lies 200 miles north of Yangon, the former capital, which was founded in the 11th century.

After meeting the two leaders, Francis will deliver his first, and perhaps most important speech, to the state authorities, representatives of civil society, and the diplomatic corps at the Myanmar International Convention Centre in the new capital city. The following day, he will have a private conversation with the general in the residence of the cardinal in Yangon, where the pope is staying throughout his visit.

Myanmar, a predominantly Buddhist country, established diplomatic relations with the Holy See on May 4. Buddhist monks play an important and influential role here, Cardinal Bo said. There are 500,000 Buddhist monks in the country, and 500,000 soldiers (almost all Buddhist).

Catholics enjoy “a very good relationship with the Buddhists in Myanmar,” the cardinal said; they cooperate well together in humanitarian work, as they did after the cyclone Nargis in 2018. Francis will seek to strengthen the Catholic-Buddhist relationship by meeting the “Sangha”—the Supreme Council of the Buddhist monks in the Kaba Aye Centre (“World Peace” Center), Yangon, on the evening of Nov. 29. This center, the symbol of Thervada Buddhism, is dominated by the Kaya Aya Pagoda (“the Pagoda of World Peace”).

As pastor of the universal church, Francis is coming first-of-all to meet and encourage the small Catholic community here, with its 700,000-faithful people scattered in 16 dioceses, served by 20 bishops, 800 priests, 2,400 religious sisters and 400 seminarians. In his video message, the pope said he was coming “to confirm the Catholic community of Myanmar in its faith in God and witness of the Gospel.” Significantly, given the problems in the country, he explained that the Catholic faith—which has been in this land for some 400 years—“teaches the dignity of every man and woman, and demands that we open our hearts to others, especially the poorest and most in need.”

During his visit, Francis will celebrate two Masses in Yangon: one in the open air at the Kyaikkasan Ground, a former racecourse, the other in the cathedral for young people. Cardinal Bo said more than 150,000 are expected for the open-air Mass, and many will have travelled for days to pray with Francis, the first pope to visit Myanmar.