The secular world has turned Thanksgiving into madness. 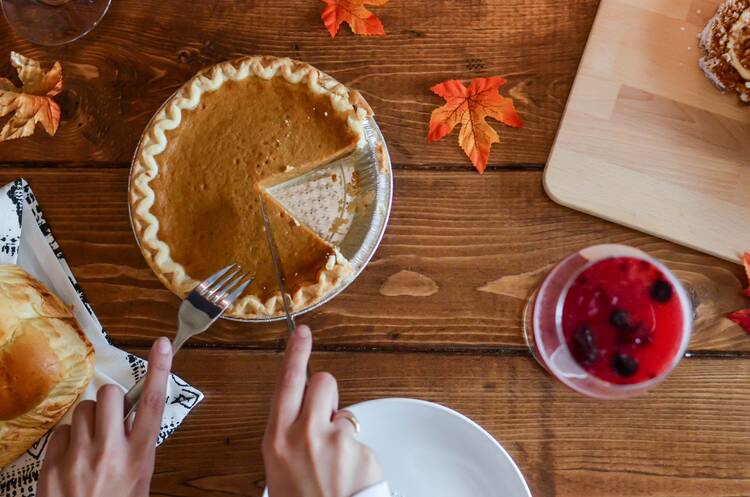 Photo by Element5 Digital on Unsplash

Today, I bought a gravy boat. It is my very first gravy boat. I felt strangely moved and teared up a bit, right in the middle of the supermarket. I had not slept in three days, but still, my very own gravy boat felt momentous.

Thanksgiving is the only day of the year I ever make gravy, which probably accounts for how horrendous my gravy is. I always have to ask someone to bring a gravy boat, and then I have to remember to clean out their gravy boat and give it back to them before they leave. It is, in short, madness.

All of Thanksgiving is madness. The one good thing you can say about it is that it is not a religious holiday, which means you may be making everyone miserable, failing in every way and salting the earth for any possible future of family happiness, but at least you don’t have to go to Mass!

All of Thanksgiving is madness.

I mean, you don’t get to go to Mass. Unless you want to.

Which you totally would, if you were not already hip deep in traditions and obligations that have built up over the years like so many barnacles on a houseboat that never leaves the pier. This is what happens when we do not have any demands from the liturgical year: We make up our own demands and infuse them with a sense of moral urgency that would make the most exacting saint weep with envy.

We hear so much about how stringent the church is, how unreasonable in her strictures, how strict in her unreasonableness. But there is no institution so unforgiving as the secular world at this, the most wonderful time of the year.

But there is no institution so unforgiving as the secular world at this, the most wonderful time of the year.

Don’t believe me? Hey, you are putting off making pie crust. You can spare a few minutes for a side-by-side analysis. Take a look.

The church asks us to “fast” before receiving the Eucharist...for an hour. This means you can get up, have some coffee, swing by McDonald’s and order a scrumptious EggMcGloppy, scarf it down, wipe the grease on your pants, toddle into church like Winnie the Pooh and, as long as they sing at least three verses of “Anthem” before Communion and don’t rush the chorus, you have “fasted.”

But there is no institution so unforgiving as the secular world at this, the most wonderful time of the year.

The secular world, on the other hand, starts bombarding you sometime in October with pre-game guilt about all the food you are going to eat at Thanksgiving and Christmas and New Year’s. This can’t just be me, right? There I am, blissfully dreaming my way through October as I anticipate all the Laffy Taffy I am going to steal from my kids’ trick-or-treat bags, and suddenly I am drowning in a sea of ads for post-Christmas weight loss shakes and for organic, ethically sourced parasites I should start buying now to preemptively shock my body into devouring itself (so I can be my best self). Why? Because I’m worth it. Or will be, once I can button my pants again.

Score one for the church.

Another example: Most of the civilized world believes with all their hearts that the Catholic Church is the final word in legalism and rigidity. How could it possibly matter if we say “homoousios” instead of “homoiousios”? Who cares what kind of grain we use to make a Communion wafer? Are you really gonna tell me it is an earth-shattering problem if the priest uses his thumb and forefinger to scratch his nose after the consecration? What kind of nutjob cares about piddly little stuff like that? Sheesh, Catholicism. So trivial, so inflexible!

Where does gratitude fit in the spiritual life?
James Martin, S.J.

Secular Thanksgiving, on the other hand? Let’s listen in to one happy household, where young wifey is hosting the big event at her home for the first time and her mother-in-law remarks, her voice rapidly rising to an incredulous shriek: “You put nutmeg...in your sweet potatoes?” Everyone knows it was infallibly established during the Ecumenical Council of Our Family and Your Family that if more than three micrograms of nutmeg are found to be present in the entire meal, including appetizers you snuck into the garage but we saw you, the whole holiday shall be declared invalid and we will have to have it at Arby’s next time. That is what this family has come to! Nutmeg, indeed. Anathema!

Gesundheit. And score another one for the church.

Here is a final example.

Church: Here, have some wine.

Secular Thanksgiving: Here, have some wine.

I guess that one’s a draw. This malbec is excellent. Oh, it’s a shiraz? Let me have another one, just to see if you’re right. Oops, there is a rule that says you are supposed to have white wine with turkey, not red. Hit me again, barkeep. Gotta get this right.

Here’s to you! And your gravy boat, too!

And a happy Thanksgiving to all.

Thanks for the smile you've brought to this (raised Catholic but now) atheism-leaning secularist, Ms. Fisher. I'll leave my commenting at that.

Several good points. But a history of rural and premodern Europe and North America tells us that religious feasts were marked by days of food preparation--all done by women who toiled over wood stoves and fires. No thank you.