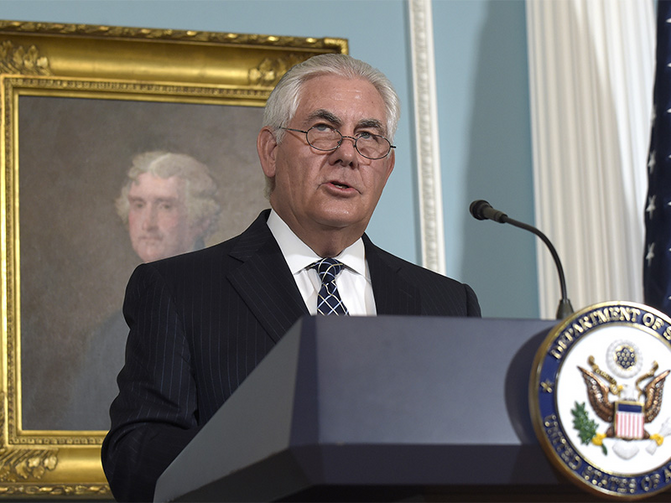 Secretary of State Rex Tillerson speaks on the release of the 2016 annual report on International Religious Freedom on Aug. 15, 2017, at the State Department in Washington, D.C. (AP Photo/Susan Walsh)

(RNS) — The U.S. State Department often misses its deadline to release a list of the world’s worst violators of religious freedom — or doesn’t release a list at all. This year, Congress had hoped to break it of the habit.

In December, lawmakers passed a law mandating that the department name those “Countries of Particular Concern” within 90 days of releasing its International Religious Freedom report.

That report came out on Aug. 15, making Monday (Nov. 13) the deadline for the State Department. But there is still no list of CPCs, even though Secretary of State Rex Tillerson has said religious freedom is a “human rights priority” for the Trump administration.

The delay bothers some religious freedom watchdogs, including members of the U.S. Commission on International Religious Freedom, an independent, bipartisan body set up by Congress in 1998 to monitor the issue.

“Failing to designate CPCs tells the violators of religious freedom around the world that the United States is looking away,” USCIRF Chairman Daniel Mark said in a written statement.

The Countries of Particular Concern are a list of nations that violate religious freedom in a “systematic, ongoing, and egregious” way, according to USCIRF.

USCIRF must provide its own list of recommended CPCs to the State Department by May 1, according to the International Religious Freedom Act of 1998. The department does not always include all of the commission’s recommendations on its list — the one to which world leaders pay more careful attention.

In April, USCIRF recommended 16 countries as Countries of Particular Concern, including North Korea, China and, for the first time in the history of the list, Russia. The commission noted in its report that in 2016, Russia has passed a new law “effectively criminalizing all private religious speech not sanctioned by the state,” all but banned Jehovah’s Witnesses and tried Muslims “on fabricated charges of terrorism and extremism.”

Watchdogs had hoped the Frank R. Wolf International Religious Freedom Act passed last year would prod the State Department to release its list sooner, Mark told RNS, “but they did miss the deadline.”

The act, named for the Republican former congressman who made international religious freedom one of his signature issues, also requires the White House, for the first time this year, to name “Entities of Particular Concern,” in addition to CPCs. USCIRF recommended that list include the so-called Islamic State of Iraq and Syria, the Taliban and al-Shabab.

That new requirement may be what’s holding up the State Department’s list: The White House has not yet delegated authority to the State Department to name Entities of Particular Concern, as it has with the CPCs. That’s what Ambassador Michael Kozak, senior adviser to the U.S. Bureau of Democracy, Human Rights and Labor, said during a briefing on religious freedom streamed Wednesday on the U.S. Helsinki Commission’s Facebook page.

“People like to think this is due to some titanic bureaucratic battle going on, but it tends to be more mundane stuff,” Kozak said.

A State Department official told RNS in an email Friday that those designations would be released soon and reiterated that religious freedom is a priority to the Trump administration. The official did not comment on why the list was delayed.

Mark said there has not been much reaction to the missed deadline, as few Americans, even those concerned about religious freedom, are aware of the new law aiming to get the CPC list released faster.

“I suspect it’s also balanced by the fact that the administration has been doing good things (on the issue). There is some leeway and benefit of the doubt being given,” said Mark, who was appointed to the commission by Speaker of the House Paul Ryan, R-Wis.

But, the chairman added, “I think if we get to the end of 2017 and this hasn’t been done, I think people will be disappointed and frustrated and will begin to worry if there’s something problematic going on in the background.”