Pope Francis in Colombia, Day 4: Do not be afraid of renewal, pope says in Medellín 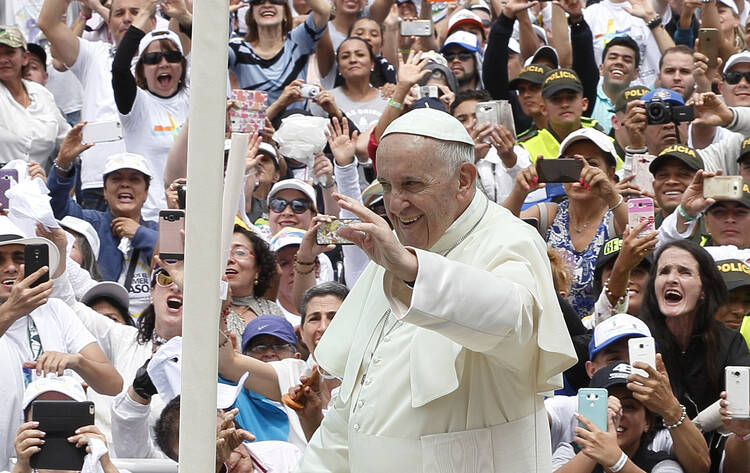 After the Mass for more than one million in Medellín, Pope Francis went to a century-old orphanage for abandoned girls. There he heard from Claudia Garcia, 13, telling how before she could even speak she lost her entire family when a guerrilla unit raided her village on a deadly rampage. The only survivors were a handful of children ages 2 to 8.

Then he presided over a meeting with priests, seminarians, nuns and their families, talking of the need for rectitude but also tolerance as they pursue their calling to spread God's word.

He frequently went off script, at one point recalling with pain Medellín's "drug assassins," when the city was at the center of a thriving cocaine business that had converted it into the murder capital of the world.

Medellín, he said, "evokes for me the many young lives cut short, discarded and destroyed," said Francis, who has frequently denounced the scourge of drug trafficking, thanks in great part to his experience ministering to addicted youth in the slums of Buenos Aires.

"I invite to remember and accompany this mournful procession, and ask forgiveness for those who destroyed the dreams of so many young people"

Reporting from the Associated Press.

Do not be afraid of renewal, pope says in Medellín

Over one million people gave Pope Francis a rapturous welcome when he arrived in Medellín, the capital of Antioquia, the Catholic heartland of Colombia, to celebrate his third Mass in this majority Catholic country of 49 million people.

The first Latin American pope came here to Medellín to confirm and encourage those gathered in their following of Jesus, and called for a radical renewal of the church. He assured this renewal can happen if disciples of Christ adopt three attitudes in their lives: “To go to what is essential, to be renewed and to get involved.

"My brothers, the church is not a customs post," Francis said. "It wants its doors to be open.

"It is of the greatest importance that we who call ourselves disciples not cling to a certain style or to particular practices that cause us to be more like some Pharisees than like Jesus," he said. Those in the early church who stuck so closely to the rules became "paralyzed by a rigorous interpretation and practice of that law," he said. Francis said that such "cold attachment to norms" might bring comfort and assurance to Catholics who need the security of laws, but it belies the Gospel-mandated call to help others who are not so perfect and need consolation.

Medellín, known as “the city of the eternal spring, is the second largest city in the country, with a population of 2.5 million inhabitants. Medellín and the state of Antioquia have suffered much violence in past decades, not only because of the decades-long civil war but also in conflict related to the drug trade.

Renewal can happen if disciples of Christ adopt three attitudes in their lives: “To go to what is essential, to be renewed and to get involved.”

Medellín has become known throughout the Catholic world because the second General Assembly of the Bishops Conferences of Latin America and the Caribbean (CELAM) was held here in 1968. Its documents, which express the teachings of the Second Vatican Council, inspired the renewal of the church in Latin America and indeed had a major influence on Catholicism worldwide. Pope Paul VI came to Bogotá for the opening of the assembly, and St. John Paul II came here in 1986. Francis knows well what Medellín meant for this continent and the impact it had on his own vocation and ministry in Latin America. Now as pope, he is taking major steps to advance the direction given by Vatican II to the church, after a period when that was halted for various reasons.

In his homily, delivered in the same airport base where John Paul II celebrated Mass 31 years ago, Pope Francis sought to continue the renewal of the church called for by Vatican II by reminding the Catholics of this land—bishops, priests, religious and laity—that from the very beginning “following Jesus involved a great work of purification in his followers.” Today, too, he said: “Jesus wants us to follow him in such a way as to go to what is essential, to be renewed and to get involved. These are the three attitudes that must form our lives as disciples.”

Next, Francis told them, “We should not be afraid of renewal.”

Pope Francis: “We should not be afraid of renewal.”

“The church always needs renewal,” the pope said. “She does not renew herself on her own whim” but does so “firm in the faith, stable and steadfast, not shifting from the hope of the Gospel.” Renewal “entails sacrifice and courage,” he added.

Pope Francis told the crowd that “Jesus invites us to reflect on regulations when our following him is at stake; when his open wounds and his cries of hunger and thirst for justice call out to us and demand new responses. In Colombia, there are many situations where disciples must embrace Jesus’ way of life, particularly love transformed into acts of nonviolence, reconciliation and peace.” His words drew a spontaneous and strong round applause.

Francis then focused on the third attitude that must be a hallmark of the disciple of Jesus: “Getting involved...even [when] it may seem that you are getting dirty or stained.”

“Today,” he said, “we are called upon to be brave, to have that evangelical courage which springs from knowing that there are many who are hungry, who hunger for God, who hunger for dignity, because they have been deprived. As Christians, help them to be satiated by God; do not impede them or stop this encounter.”

He reminded them that “the church is not ours; she is God’s. He is the owner of the temple and the field; everyone has a place, everyone is invited to find here, and among us, his or her nourishment. We are simple servants (cf. Col1:23), and we cannot prevent this encounter.”

In his homily, he cited the example of St. Peter Claver, “who understood this well” and “whose motto was ‘slave of the blacks forever’ because he understood, as a disciple of Jesus, that he could not remain indifferent to the suffering of the most helpless and mistreated of his time and that he had to do something to alleviate their suffering.” The crowd applauded this warmly.

Francis has mentioned this Jesuit saint every day in his homilies or speeches here. He recalled that today is the saint’s feast, and tomorrow he will venerate relics of St. Peter Claver in Cartagena where he worked and died.

Later this afternoon, Pope Francis will also refer to another person who had “evangelical courage,” St. Laura Montoya, the only Colombian saint, who at the age of 40 dedicated her life to the indigenous people in this region and became a strong advocate of their human rights before the government of the day. On the day he announced his resignation, Benedict XVI issued the decree for her canonization, and Francis declared her a saint on May 12, 2013.

“The church in Colombia is called to commit itself, with greater boldness, to forming missionary disciples.”

Concluding his homily in this spectacular setting, with his back to a landscaped of skyscrapers and the Andes, Pope Francis said, “The church in Colombia is called to commit itself, with greater boldness, to forming missionary disciples.”

Echoing the words of the bishops at the CELAM meeting in Medellín in 1968 and Aparecida in 2007, Pope Francis encouraged them to be “missionary disciples that know how to see, without hereditary short-sightedness, looking at reality with the eyes and heart of Jesus, and only then judging. Disciples who risk, act and commit themselves.”

The more than one million people listening to him burst into thunderous applause when he finished, as had happened also when he concluded his homilies at Masses in Bogotá and Villavicencio.

His words reached the hearts of the people here in Medellín and in the region of Antioquia, which suffered so much from the armed conflict and the violence of the drug cartels. There were many victims of this violence at his Mass. I spoke to several of them, including Patrizia Bayana Noregna whose husband, Luis Alberto, disappeared 23 years ago. Despite her loss, she confided that she agrees with Pope Francis’ push for reconciliation in this land.

The majority of the people in Medellín voted “no” in the referendum for the peace accords. The leader of the opposition to the peace accords, the former President Álvaro Uribe, is from this city and attended the Mass. The country’s president, Juan Manuel Santos, was not present in Medellín, but he attended the Mass in Villavicencio yesterday and will be in Cartagena tomorrow, the last day of the pope’s visit here.

Many of the 1.2 million people at this Mass had arrived at the airport base the previous evening, and the rest came earlier this morning—despite the rain and stormy weather that forced the pope to come by car from the airport instead of using the helicopter. But as happened at Bogotá, the rain stopped and the sun came out just before the pope arrived.

After Mass, Francis went for lunch and a brief rest at the local seminary, before visiting the Hogar San Jose this afternoon, which is home to over 1,000 children, many of them victims of the armed conflict. Afterward, before returning to Bogotá, he will meet with the priests, religious and seminarians of this region, which is rich in vocations.

With additional reporting from the Associated Press.