Pope Francis will visit Myanmar and Bangladesh in November 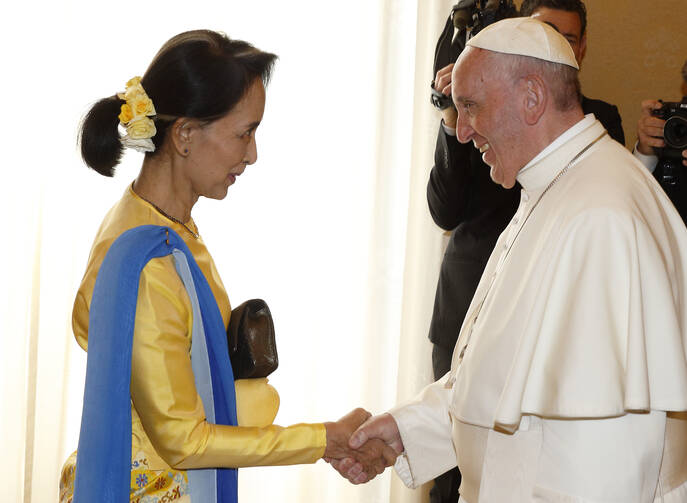 The director of the Holy See’s press office said that Pope Francis, “welcoming the invitation of the respective heads of state and bishops, will make an Apostolic Visit to Myanmar from Nov. 27-30, visiting the cities of Yangon and Nay Pyi Taw, and to Bangladesh from Nov. 30-Dec. 2, visiting the city of Dhaka.”

He will be the first pope to visit Myanmar, a majority Buddhist country of some 55 million people, with eight major tribes and another 135 ethnic groups with different languages, dialects and culture.

Under Daw Aung San Suu Kyi, a Nobel Peace Prize winner and the country’s top civilian leader, Myanmar is seeking to overcome one of the world’s oldest civil wars and to properly address the highly sensitive issue of some one million Rohingya migrants who make up a large part of the Muslim minority in this country.

On Sunday, Aug. 27, the pope appealed for an end to “the persecution” against the Rohingya and called for full respect for their rights.

Myanmar, formerly known as Burma, established diplomatic relations with the Holy See on May 4, when Aung San Suu Kyi visited Pope Francis in the Vatican. Shortly after, the country’s president, Htin Kyaw, extended an invitation to the pope.

Confirmation of the pope’s visit brought joy to Myanmar’s 700,000 Catholics and their charismatic leader, Cardinal Charles Bo. The country’s first cardinal has committed to improving relations with the Buddhists, as well as with the followers of the country’s other religions.

The motto for the papal visit to Myanmar is “love and peace” and the logo is a heart, referring to the common ground between Christianity and Buddhism. “It is this concept [of love] that creates mutual respect and acceptance between the Christians and Buddhists,” according to a statement from the Vatican prepared together with Myanmar’s bishops’ conference. Pope Francis is presented on the logo with a dove in his hand, symbolizing that he is coming as a messenger of peace to this land.

On Nov. 30, Pope Francis will fly from Myanmar to neighboring Bangladesh, the fourth most populous Muslim country in the world. Eighty-seven percent of its 156 million people are Muslim, 10 percent are Hindu. Christians are a tiny minority of 600,000 believers, 350,000 of whom are Catholic.

Religious harmony is the hallmark of this country that came into existence in 1971 after separating from Pakistan following a nine-month war. “Bangladesh is the best example of religious harmony in the world,” Cardinal Jean Louis Tauran, president of the Vatican’s Pontifical Council for Interreligious Dialogue, said when he came here in 1991.

Cardinal Patrick D'Rozario, the archbishop of Dhaka and country’s first cardinal, told me this harmony “goes back to the creation of Bangladesh.” He recalled that “when Pakistan was created in the India-Pakistan division (partition) in 1947, harmony was forgotten in some way. But with the creation of Bangladesh in 1971 that harmony, a feature of the culture of Bengali nationalism, was one of the principal criteria for having an independent Bangladesh. Indeed, Bangladesh was founded on four principles: secularism, nationalism, socialism and democracy.”

Significantly, the Holy See was one of the first states in the world to recognize the newly independent Bangladesh.

It is not surprising then that “Harmony and Peace” (“Shomprity and Shanti” in Bengali) is the motto for the papal visit. “It represents the present reality in the country and at the same time the aspiration for harmony among religions, cultures, peoples, society, history, heritage and traditions in Bangladesh,” the Vatican explained in a statement prepared with the local bishops’ conference.

Pope Francis: Jesus made Peter and his successors, the bishops of Rome, the center of communion in the church
Gerard O’Connell

The logo for the visit includes a “peace bird” and the national flower, the hapla, or water lily. The peace bird symbolizes Pope Francis, who comes as “the ambassador of Harmony and Peace to this land and his free spirit. His presence is a “joyful celebration for the nation and for the Church,” the Vatican statement said.

The flower “symbolizes life and hope and also expresses that our faith is very much alive even though we are few in number,” it added. Moreover, it said, the bird and the flow “also represent Mother Earth, our Common Home.”

Francis is the second pope to visit this land. St. John Paul II came here in 1986. This will be Francis’ third visit to Asia since becoming pope in March 2013. He visited South Korea in August 2014 and Sri Lanka and the Philippines in January 2015.